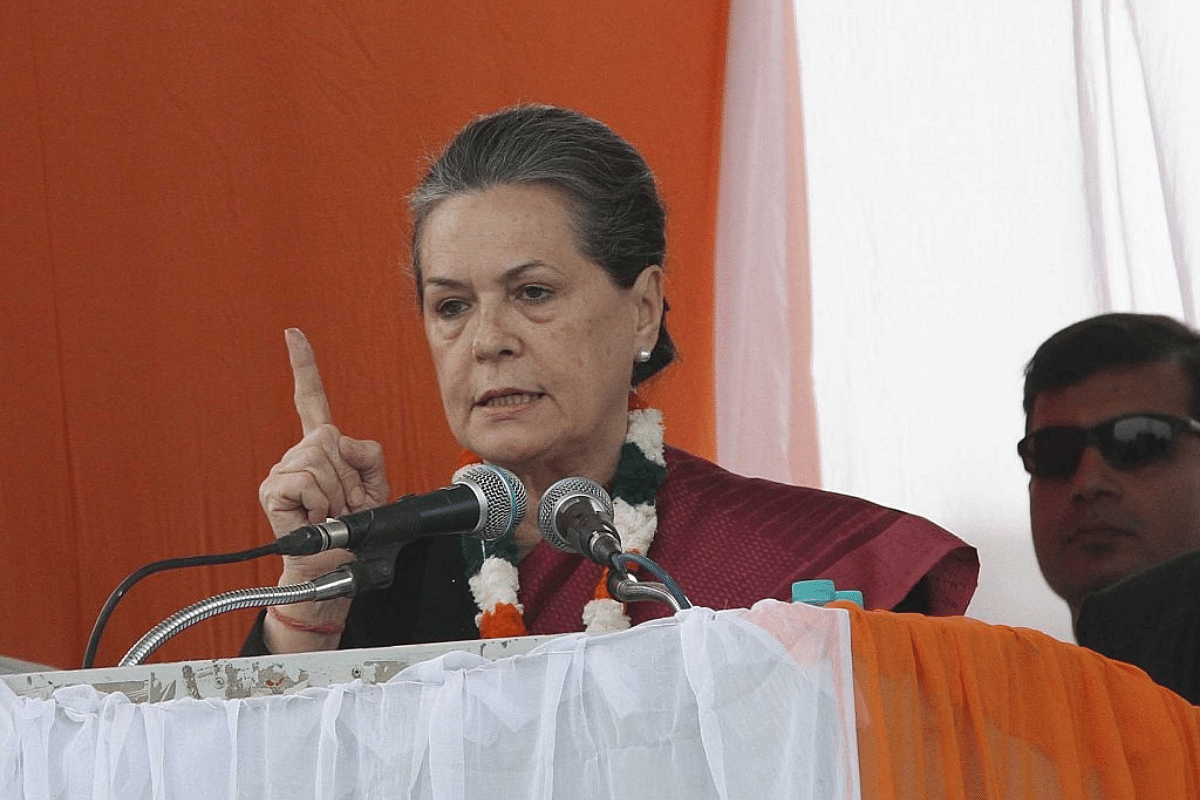 One set wants to see whether the party can reinvent itself as a meaningful political force. A second set seeks to analyse the modalities, dynamics, possibilities, and constraints of such potential reforms.

Can the Congress exist without the Gandhi family?

A third set speculates furiously on what might happen if this latest attempt to revive the Congress fails. A fourth bemoans missed opportunities. A fifth is extremely worried that their cherished ‘idea of India’ will flounder along with the party.

Then there are those who somehow subsume their existential angst and couch their dismal portends in desperate pleas to offer the Congress gratuitous advice. One effort even invoked an automotive analogy, by comparing the party to an Ambassador car.

It plaintively suggested that if even the evergreen Amby could make way for a Maruti or a Toyota, then surely the Congress could junk Nehru, temple runs, the ‘janeu’, or the needless anti-corporate stance, by accepting the nature of evolution. A new model for new times.

It is a long list, and the questions are not without merit, since the resurrection or demise of the Congress has pan-Indian implications. But what’s interesting is that the bulk of such commentary comes from the usual partisan circles, with the same hopeful bottom line — the Congress has to be reborn if their India is to not fall prey to the ‘big, bad BJP’. However, very little of such hand-wringing is based on facts.

That’s odd, because Sonia Gandhi addressed the party on 13 May in Udaipur, and her speech offered numerous indicators on what course the Congress might take.

She spoke for a quarter-hour. The first half was in English. She offered delegates a sweeping take on the state of the nation today.

The second half was in Hindi and focused on how she expected her party to rebuild itself.

In the first seven minutes, Sonia Gandhi condensed more alarmism, victimhood, and gloom into her message than you would have thought possible. It was the same stock phrases over and over again: “Modi… keeping the country in a state of permanent polarisation… people… live in a constant state of fear and insecurity.”

She repeated words like "fear" and "threat," and identified her primary target audience upfront without ambiguity: “It means viciously targeting, victimising, and often brutalising minorities.”

According to Sonia Gandhi, the other big dangers emanating from Modi (note how she goes after the individual) were his persistent efforts to denigrate Jawaharlal Nehru, the destruction of institutions, the glorification of Mahatma Gandhi’s killers, and of “systematically undermining… the constitution… justice, liberty, equality, fraternity, and secularism.”

For a moment, it felt like she would burst into the Marseillaise, and rush off to storm a new Bastille.

But only for a moment, because if this ad hominem melancholia was her anthem, and a brazen, unvarnished plea for the lost Muslim vote her strategy to assault Fortress Modi, then even the dimmest of political generals would tell her that the attack was set to flounder well before the bugle was blown.

And that encapsulated in a nutshell both Congress thinking and the party’s fortunes in the times ahead.

One, the Congress has demonstrated once again that its inability to avoid demonising Narendra Modi has reached pathological levels. Their sustained efforts over the past two decades have proved that this approach is patently counterproductive, because it is the one thing that has done the least to dent Modi’s popularity. If after that and dozens of electoral losses, the Congress persists on this tack, then there is very little to be said.

Two, Sonia Gandhi’s Udaipur speech reaffirms that the Congress has no meaningful alternate socio-economic vision to offer, since they are too deeply stuck in the rut of worthless rhetoric and jarring negativism. This is also bad strategy in electoral terms, because the Congress is largely pitching for the traditional non-BJP vote, and the competition for that segment is only growing hotter by the day.

While such electors may connect with the party’s anti-Modi rhetoric, it won’t turn them into Congress voters since there are other parties that abuse Modi more shrilly, more creatively, and who are better at defeating the BJP in elections. This fundamental truth seems to have eluded the Congress, and the gradual shift of their votes to other parties will, in fact, affect the Congress more than anything the BJP does.

Three, this Pavlovian necessity to try and win back the Muslim vote reveals the party’s dire predicament more sharply than much else. Ironically, this vote bank is not with the BJP, but with other parties that the Congress is either in coalition or competition with.

This creates an impasse, because the Congress need for the Muslim vote, as voiced in no uncertain terms by Sonia Gandhi in Udaipur, either effectively puts paid to any plans of a grand pan-Indian alliance to take on the BJP, or restricts the Congress to where it is today in most states — a junior coalition partner with very little scope for expanding its vote base, or on its own.

Worse, for the Congress, not one of these parties can afford to let go of the Muslim vote they so arduously took from the Congress, because that would either mean a key split of that vote block (which gives electoral advantage to the BJP in spades), or erodes their hard-won primacy vis-à-vis the Congress.

Does any political analyst worth their salt truly believe that Mamata Banerjee, or Tejasvi Yadav, or Akhilesh Yadav, for example, would ever dream of allocating even a part of the dwindling vote banks they have left to a spent force that brings little to the table?

These are the immutable ground realities within which the Congress has to operate while it conducts conclaves for self-restitution. But the second part of Sonia Gandhi’s speech completely ignored them all.

Instead, the delegates were treated to homilies on the urgent necessity for periodic organisational change, courage, dedication, sacrifice, and a shift in the style of functioning. The need of the hour, the Congress president said, was selflessness, and a strangely transactional requirement to return to the party what the party had given its members.

Evidently, that message was lost in translation, because the next day, the Congress’s biggest Hindu face in Punjab, Sunil Jakhar, quit. For a party that greatly values identity politics, this was a huge blow. As it is, the party was reeling from the loss of a prominent Christian face in Kerala, K V Thomas, just the day before.

If that wasn’t bad enough, Sonia Gandhi’s Friday the 13th speech also elicited an ominous note of impending departure from Hardik Patel, the abrasive, tempestuous head of their Gujarat unit. The shivers at the Shivir were growing (see here for what happened in Udaipur on the morning of the first day).

Thus, the implications of this latest effort to resuscitate the Congress are manifold.

One, it further reinforces the fact that the Congress cannot function without a Gandhi at its helm, since a non-Gandhi in that post would inevitably lead to a major split in the party within months.

Two, it forebodes an increase in personal attacks on Modi. Sonia Gandhi’s specific references to the Prime Minister indicate that the Congress party perceives him as a greater threat to their electoral successes than the BJP — now more than ever.

Whether such pettiness follows a "chowkidar chor hai" model or something else is simply a matter of detail, but Congress civility in public discourse will remain a rarity.

Three, identity politics will continue to reign supreme in the Congress’ political calculations. Whether Sonia Gandhi and her advisors admit this point or not, the tone and content of her Udaipur speech clearly imply that their path to power impinges upon winning back the Muslim vote.

A rich diet of alarmism and Hindumisia can thus be expected, generously drizzled with saviour-complex-level virtue-signalling.

Four, this creates a cleft-stick situation, since efforts to enhance vote banks will bring the Congress into conflict with those non-BJP parties that, too, seek to expand their presence by employing similar stratagems. This means that the index of opposition unity will remain far less than what is theoretically possible, with a high chance of the Congress getting crushed at the ballot box (as was seen in Kerala and Uttar Pradesh).

It also creates a conundrum: the Congress cannot reposition itself at the national level as a party of power without growing, yet, at the same time, it cannot grow adequately without coming into conflict with its allies and non-BJP competitors.

One way out is a series of mergers, but the probability of that happening is low, not least because it would mean, for starters, an irreversible erosion of the Gandhi family’s stranglehold over their party. They can’t have their cake and eat it too.

The net result is that the cleft stick will stay cleaved, and not all the twine in Udaipur can bind it firm again.