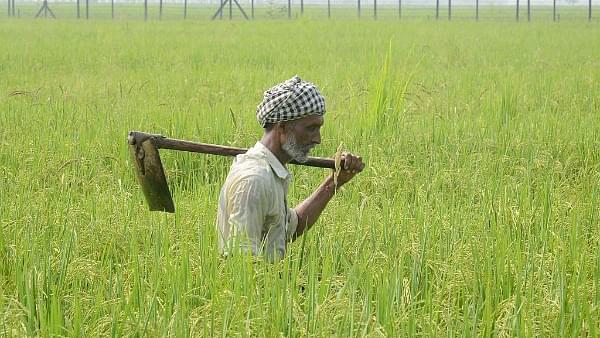 Agitating farmers in Maharashtra have demanded the implementation of recommendations made in the National Policy for Farmers (NPF), prepared by M S Swaminathan and his team. The report was submitted to the United Progressive Alliance (UPA) government in 2006. Interestingly, the same people who brushed it under the carpet back then are asking for it to be implemented now. And thus the NPF is back in the spotlight.

As its ‘guiding principles’, the NPF quotes:

To those who are hungry, God is Bread.

Everything else can wait, but not agriculture.

Further, the policy states, “The time has therefore come when we should focus more on the economic well-being of the women and men feeding the nation than just on production.” (1.1.2)

Based on this, it would be safe to assume that NPF would aim to help farmers experience financial well-being and, at the same time, feed the poor people of the country. To achieve these goals, we need to put agriculture above all. That is what Panditji said, didn't he?

But as we dig deeper into this report, what we feel is disappointment. This report neither paves the way for the financial well-being of farmers nor does it guarantee food to the poor. This aim can be better achieved by unshackling markets of agricultural produce off government policies. But NPF has ignored this basic fact. We wonder why Swaminathan and his team have displayed ignorance on the root cause behind the plight of farmers. Then, another question arises: why was this exercise carried out? And the answer lies on the first page of the document.

The policy document eulogises Indira Gandhi for commemorating a stamp on Green Revolution, but forgets to name Lal Bahadur Shastri for his contribution to the Revolution. In paragraph 1.2.1, NPF praises various agriculture-related schemes launched by the UPA. Interestingly though, NPF forgets to take note of the fact that if UPA policies were that good or effective, there would have been no need for another policy in the name of NPF. Moreover, it even fails to take note of farmers suicides, which peaked just before the formation of this commission. It looks like praising the policies of the previous Congress regimes was a major goal of the commission.

The report is not only ignorant of ground realities but is full of contradictions. It praises Mahatma Gandhi National Rural Employment Guarantee Act (MNREGA) at one point and, in the same breath, stresses on the use of manpower in agriculture. The point to note here is that because of employment opportunities provided by MNREGA, the cost of labour has gone up significantly. Not only has the availability of labourers gone down, it has forced farmers to opt for mechanisation of farm work, wherever possible. Now, if there is a need for providing jobs in agriculture, emphasis on MNREGA needs to be reduced, at least during times when there is enough work on farms. But NPF does not consider this fact and thus manifests its ignorance of ground realities.

Secondly, in 1.5.10.3, the report raises a question about our agriculture, that it is not mechanised and so how it could compete at the international level with mechanised agriculture in developed countries. The goal of NPF should, therefore, be to make our agriculture competitive at global levels too, but here, instead of stressing on modernisation, it emphasises the use of manpower – another contradiction.

The paragraph 1.4.2 deals with land reforms. There are some laudable suggestions, but NPF proposes to deprive farmers of their rights to use their land any way they want. It may be noted that pressure on agriculture should be reduced, but NPF proposes to put restrictions on the use of agricultural land for non-agricultural purposes. Actually, growing urbanisation and losses in agriculture make it lucrative for a farmer to sell his land for a non-agricultural purpose, bringing him windfall gains and thereby reducing the pressure on agriculture. And that is actually a golden parachute a farmer can take to get out of the financial crash. But NPF denies him the same.

In 1.4.4, it proposes to set up a corporation for livestock feed and fodder. Here, what’s noteworthy is that many such corporations have been set up by the centre as well as several state governments for various purposes and none has done its job successfully and none has a clean record vis-à-vis corruption. Most of the corporations have provided for rehabilitation of cronies of political parties in power. Of course, there may be an exception or two, but this observation remains true for most of the corporations. Then why set up another corporation? Instead there is a need to make rearing of farm animals more remunerative by removing restrictions and allowing free trade.

‘Assured remunerative marketing opportunities’ is the title of paragraph 1.5.10. And it is the most important paragraph of NPF because fixing the minimum support price (MSP) with 50 per cent profit above cost of production is proposed. NPF talks about food security in this section but does not talk about leakages in the present public distribution system. Without plugging the holes in the present system, how can any security be provided to poor people?

It also talks of a 'Market Intervention Scheme' here. Till now, we have seen such schemes only kicking in when prices of agricultural commodities rise. The sole aim of such schemes thus far has been to make agricultural produce available cheaply to domestic consumers. Have we ever seen any effective market intervention scheme kicking in to help farmers? Any scheme that will help farmers realise better prices for their produce? We need to look into this aspect elaborately.

Consider the case of 'arhar'. Last season, the production of arhar was low and so the rates skyrocketed. Responding to the Prime Minister's call to produce more pulses and by considering a higher MSP declared by the government, farmers produced arhar in large quantities, so large that the Maharashtra state government was unable to purchase the total quantity of arhar produced. As of date, a few lakh quintals of arhar is lying in the open in various mandis in arhar-producing districts like Nanded, Parbhani and Latur. The whole system of procurement is rigged to favour traders and hence the Chief Minister of Maharashtra openly admitted that there was a scam worth a few hundred crores in the purchase of arhar in the 2016-17 season. It is clear that the procurement system run by the government is not fair and does not cater to the interest of farmers. In such circumstances, how would any market intervention scheme benefit farmers without changing the corrupt and inefficient system?

Take the case of onions; on the insistence of the Maharashtra Chief Minister, export was continued without 'Minimum Export Price'. We exported a record quantity of onions. This was a form of market intervention in the interest of farmers. But in case of international trade, consistency and reliability matter most. Therefore, if the government opens up export of an agricultural commodity today and bans it later, it will not help farmers or exporters as export-import policies need to be consistent. Therefore, NPF bets high on a market intervention scheme to help farmers but falls short of explaining how it will work.

Now, let us consider the most-touted recommendation of NPF: “The MSP should be at least 50% more than the weighted average cost of production.” Now, the real problem starts with the 'cost of production'. The whole process of calculating the cost of production is a highly guarded secret of successive governments. The data on how MSP is calculated is never put in the public domain. Based on whatever data he could lay his hands on, an expert like Sharad Joshi came out with scathing criticism of the method of calculating MSP. Only a fraction of the cost incurred on fertilisers, irrigation and spraying of pesticides is considered. The cost of managing agricultural activities is not considered at all, like depreciation of implements and so on.

The major problems faced by farmers are:

Free markets alone can help farmers get better prices for their produce. The National Agricultural Market is a step in the right direction. Some states, including Maharashtra, have taken the right initiatives in the direction of improving irrigation and infrastructural facilities. What remains to be done is allowing open access to export markets consistently for all agricultural commodities, allowing futures trading in agricultural commodities and encouraging competition among buyers so that farmers can enjoy better prices; in short, removing all shackles that are holding markets of agricultural produce back. Unfortunately, NPF fails to mention any of the points listed here.

During Atal Behari Vajpayee's tenure as prime minister, Sharad Joshi was made chairman of a task force on agriculture. He had submitted his report to then National Democratic Alliance government. Unfortunately, the NPF team did not consult an expert like Sharad Joshi while forming such an important policy that has the potential to affect the lives of more than half of the Indian population. This, along with rest of the facts discussed above, make clear that the aim of NPF was to support whatever the UPA was doing by toeing a line drawn by the National Advisory Council. Hence, NPF was essentially pro-UPA, not pro-farmers.