Swayamsevak – The Real Force Behind The Success Of RSS 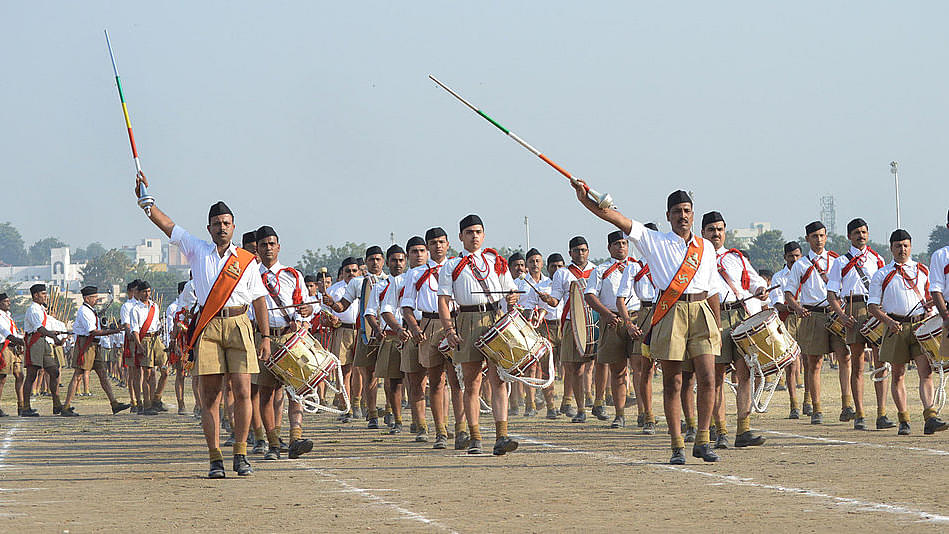 Many people have attempted to decipher the cryptic formula that Rashtriya Swayamsevak Sangh (RSS) has used, not only to get to power through its political wing – the Bharatiya Janata Party (BJP) – but also to entrench its roots and spread its presence all over the country. The phenomenal success has been attributed to a Frankenstinial concoction of fanaticism, strategy and currency.

However, such a mix is not new to Indian politics. Then, what is the true gimmick? The RSS has itself been very vocal about the reason for its success. Yet, since it's simple, it becomes impossible to believe it. This article is a humble attempt to decode the enigma that is the RSS. The writer understands that this may be labeled as oversimplification, and even obfuscation of facts. However, this is just a common person’s perspective, who has enough reasons to believe that she is rational enough. And as they say, the world looks different from mighty towers, the lay of the ground can be felt only if you take a walk.

The BJP victory in Tripura and the Pratinidhi Sabha in Nagpur had given rise to a lot of speculations. The media coverage was more of a fiction, skirting the realm of facts. Through all this din, the RSS held its meetings, made its decisions and declared the simplicity of its working for all to see. To any question about its working and the tremendous success it has gathered, they give just one answer – it is our swayamsevak, who has done this.

The problem is, in a political and even the social world, where the personality overshadows the work, and the leader usurps the credit of the team, it is quite unbelievable to understand this simple statement that has been reiterated for 92 years now. It is the swayamsevak.

We, in India, of the person-centric credo, find it very difficult to understand any other form of organisational structure. Our historical view in general is personality based, rather than about the ideas and systems that are our true legacy. Hence we divide history into the era of Chandragupta Maurya, Ashoka, Buddha, Akbar, Aurangzeb and Shivaji, easily forgetting the cultural, social, political systems they created, the ideas they generated, and the culture that came forth from the churning. We forget that the era of Chandragupta was the era of establishment of a benevolent empire, by overthrowing the autocrat, the period where polity and administration were academically established – the era of Arthashastra. Ashoka became great because he gave the world the idea of dhamma and peace; one of the greatest contributions of Akbar was the taxation system; Shivaji upheld the right of self-rule while establishing an exemplary administrative system and displaying one of the finest systems of war strategy and diplomacy.

We compartmentalise our great leaders, undermine their ideas while holding on to their identities – the culmination is incidents like the Bhima Koregaon. This trait has become stronger in contemporary history; it is more relatable and more effective. Our politics has been dominated by a party that began as a movement that gave voice to millions of faceless Indians, but has become the greatest propagator of personality cult post Independence.

For a people plagued by the personality cult syndrome, it is difficult to understand an organisation that runs on a very different value system. As the second chief of the organisation, Madhav Sadashiv Golwalkar, the second sarsanghachalak of the RSS stated,

“... no other thing is more respectable and loftier than being a swayamsevak. If it is so, you may think what about all those office-bearers from Sarsanghachalak to Gatanayak? We have evolved a system for the conduct of our activities, since no organization can function without a system...”

The RSS works on a very clear outlook. The swayamsevak is the direct representative of the organisation. There is a hierarchy for the sole purpose of organisational work, the responsibilities are entrusted. No one wears their designation on the sleeve; a cultural shock for us who live in an environment where people who have replaced their designations for their hearts run the show. And here in lies the difference. For a swayamsevak, every work is important, and every post is a responsibility, that he shoulders as sincerely and as impassively (there might be exceptions to this rule, but then they prove it is a rule). This is the reason, why after three attempts of banning the organisation, it has still grown from strength to strength; without the cacophony of dissensions that weaken the most centralised and mightiest empires.

The word centralised was used on purpose, because this is the next crucial point of difference. The central executive of the RSS has come to limelight in recent years. However, there is a prevalence of the myth that one man dictates the organisation, or at best, that the organisation is run by oligarchs. It is a myth. It is practically impossible to do so.

The RSS has a well-oiled machinery that extends from the centre to the village and ward level. The mode of operation in terms of policy and implementation is two way – bottom up, and top down – with due interaction and consensus building at every level. It is a highly effective system that works seamlessly not just during elections, but also while providing relief assistance during natural disasters in the Indian subcontinent, working in tandem with our defence forces, and organising national and international camps.

The strength of RSS rests in its nucleus – shakha and swayamsevak. The organisation has grown multifold, has expanded its area of work in geographic and social dimensions, because it has strengthened its core. Today, it has 57,233 shakhas, the number has gone up from 36,693 in 2017. The number of swayamsevaks is around 3 million.

The shakha is a one-hour daily formal gathering that incorporates physical and mental exercises in the form of games and discussions. Nothing phenomenal. But here is the secret, the shakha is a school where one is introduced to a wider world, it is a character-building institution that decries the need for a personality building camp, and a home where one gets ties that withstand the test of time. It inculcates the value of service, nationalism, unity, brotherhood and simplicity. It infuses a sense of confidence, purpose and pride in the swayamsevak. Anyone and everyone is welcome. It's a sanctuary where one isn't judged on the basis of wallet, or degree, or speech, or clothes. The shakha is the master tool that creates swayamsevak, who go into the wider world and create organisations that work for the tribal, that provide education, that promote small enterprise, that help in building sustainable livelihoods, and win elections too.

The swayamsevak is the embodiment of the organisation. It is his contribution that has led to the spread of RSS not just in India, but in 39 countries in the world. People believe in the RSS because the swayamsevak has earned their trust. They may not know the leadership of the RSS, but they judge the organisation on the basis of their daily interaction with the swayamsevak, and usually find in him a good and helpful neighbour. Thus, the common goodwill that has plummeted a so far peripheral entity (in terms of media space) into a ‘mover and shaker’ that dominates the news cycle anytime it lifts a finger. When RSS sarsanghachalak Dr Mohan Bhagwat, in his many interviews, attributes the accomplishments to the swayamsevaks, he is not being merely humble, he is stating a fact. Decentralisation and empowerment of organisational constituents is a popular management theory.

However, the greatest strength of the RSS is what the human relations experts strive to achieve in their corporate niches – interpersonal bond – a sense of belonging and purpose it gives to the people who come to associate with it in any form. When Dr Rajgopalachari had questioned Golwalkar about the aim and nature of the organisation, he had written, “ours is a Hindu family organisation; the difference lies not in type but in degree". Dr Rajgopalachari became the first sanghchalak of Madras. Academic jargon will never be able to expound the enigma. The key is simple – empathy, devotion and discipline.

Amruta Shirpurkar is a research scholar at NIT Nagpur.