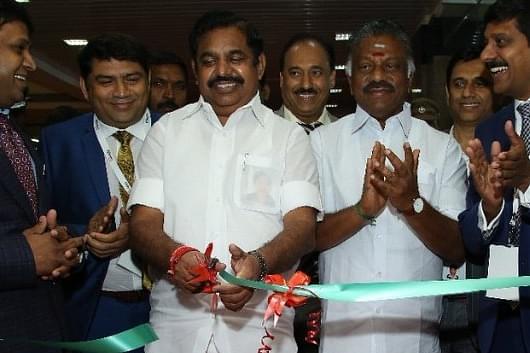 An internal tussle is on in the ruling All India Anna Dravida Munnetra Kazhagam (AIADMK) party in Tamil Nadu on who should lead the government in case it returns to power in the Assembly elections scheduled during April-May next year.

Though elections are months away and the AIADMK government in the State faces anti-incumbency factor, the ruling party wants to project a chief minister face since rival Dravida Munnetra Kazhagam (DMK) has begun projecting its president M K Stalin as the chief ministerial candidate.

The rift within the party has seen even Prime Minister Narendra Modi being dragged into the fight for supremacy.

The problem for the AIADMK is that while Chief Minister Edappadi Palaniswami (EPS) wants to be projected as the chief ministerial candidate, Deputy Chief Minister O Panneerselvam (OPS) doesn’t want to play second fiddle anymore, having been sidelined since February 2017.

Soon after the death of party supremo J Jayalalithaa, he was made the chief minister in December 2016.

On earlier two occasions (September 2000-March 2001 and September 2014-May 2015), when Jayalalitha had to vacate in view of courts’ adverse rulings against her, OPS says he was personally chosen by her to succeed.

In February 2017, OPS was removed as chief minister after being in that position from December 2016 as Sasikala Natarajan, late Jayalalithaa’s aide, wanted to become the chief minister.

Since the Supreme Court ruled that she was guilty of having assets disproportionate to her known sources of income and imprisoned her, she chose EPS as she considered him to be her trusted lieutenant.

OPS then broke ranks and stayed away with nearly 18 of his trusted legislators.

This led to EPS falling out with Sasikala. On his part, Dinakaran launched his own Amma Makkal Munnetra Kazhagam (AMMK).

EPS has been helped to hold the fort in a way by a strong presence of his Gounder community representatives in the Assembly.

The western region of Tamil Nadu, dominated by the Gounder community, elected about 35 MLAs, adding strength to EPS' efforts.

OPS belongs to the Thevar community, a dominant one in southern parts of Tamil Nadu, which had been calling the shots in the AIADMK ever since Jayalalithaa came to power, thanks to Sasikala’s proximity to her.

In a way, the EPS-OPS tussle now seems to be also one for the supremacist claim of these two communities.

To his credit, EPS has managed the AIADMK government tactfully since February 2017 to keep the DMK at bay.

It is one of the main reasons why he and his supporters want him to be projected as the chief ministerial candidate.

The DMK has tried its best to bring down the AIADMK, but in vain.

Some observers attribute the Opposition party’s failure to bring down a divided ruling party due to poor strategy by its president.

Right now, the DMK is going all out to try and win over the people, projecting Stalin as the chief minister.

Backed by political strategist Prashant Kishor, the DMK chief has been voicing on all and sundry issues every day.

The problem for AIADMK is that most of its legislators feel the party should project a chief ministerial candidate, given the fact that the DMK has done it.

At least 20 ministers are in favour of going to the polls by projecting a chief minister.

This has led to friction within the party.

In order to prepare for the Assembly elections and decide on the party’s strategy, the AIADMK executive committee met yesterday (28 September).

The meeting lasted over five hours, mainly because of the internal tussle, with 294 of the 296 taking part in it.

Reports said that OPS staked claimed on the grounds that he had been chosen by the late Jayalalithaa herself twice as the chief minister, whereas EPS was an appointee of Sasikala.

EPS shot back saying OPS was also chosen by Sasikala too after Jayalalithaa’s demise in December 2016.

EPS and his supporters are insisting that the party announce its chief ministerial candidate before the party formulates its strategy for the polls.

OPS reminded the meeting that he resorted to “Dharma yuddham” (fight for justice) against Sasikala and her family's dominance in the party, besides ministers chosen by her.

He said he nursed no ill-will against EPS.

The chief minister then pointed out how OPS and his supporters had voted against the AIADMK government’s confidence motion in February 2017.

He claimed that OPS would have been responsible had the government fallen then.

To this, OPS responded saying he had buried his differences and joined hands with EPS only on Prime Minister Narendra Modi’s advice that he settled for the deputy chief minister’s post for this term alone.

EPS pointed out that Modi had commended him for effectively tackling the pandemic Coronavirus situation, thus brining the prime minister to the centre stage of their tussle.

However, no solution was found with both saying that they neither concurred nor opposed with the suggestions put forth.

Some of the neutral leaders in the party have pointed out that both were crucial to the party’s fortune in the Assembly elections.

The AIADMK has now fixed 7 October as the day when it would announce the chief ministerial candidate.

But the tussle is a cause for concern since both leaders are from communities that can be deciding factors in the outcome of the elections.