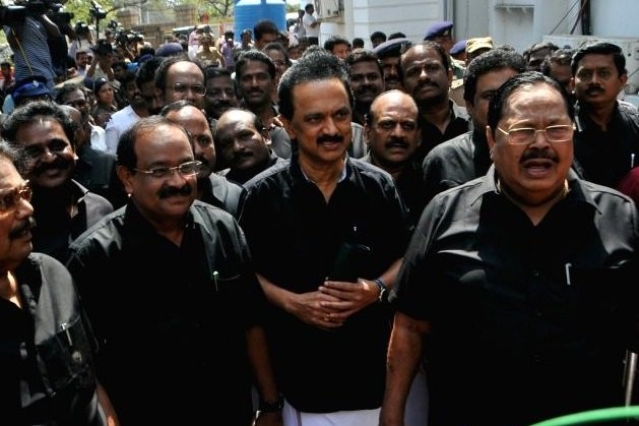 In Tamil Nadu, there has been a partial wave – an anti-incumbency wave. But, more importantly, there was a wave of fabricated and perceived victimisation of Tamils. For the last five years, within a few months of Narendra Modi becoming the Prime Minister in 2014, the propaganda against him started in Tamil Nadu with an extraordinary intelligence that camouflaged its politics in the garb of Tamil identity.

The jallikattu protest was the first episode of this propaganda. One was surprised to see that Islamists of the Tamil Nadu Tawheed Samaj (TNTJ) were among the organisers of the protest. A leader of the TNTJ had earlier called jallikattu “a barbarian sports of an ignorant dark period”. But they were there on the ground. Mixing along with the protesting crowd, they sowed the anti-Modi propaganda, knowing fully well that it was Congress-led United Progressive Alliance, of which the Dravida Munnetra Kazhagam (DMK) was a part, which was instrumental in bringing about the ban.

But that protest was only the beginning. In regular intervals, with remarkable consistency, major Tamil channels beamed fake news. This included rumours like Modi government cancelling Pongal holidays. By the time it was revealed that the news was fake, the psychological damage had already been done.

The propagandists and strategists of this 'hate Modi’ campaign had taken control of one leading traditional Tamil media group. This media group, though originally from a nationalist tradition, had been gradually captured, and which now peddles only Dravidian and anti-Modi propaganda. In a similar manner, a major English newspaper in Chennai had also become extremely anti-Modi.

What was astonishing was the amount of coordination between all these forces. For example, any English news report that appeared in any of the web-based anti-Modi portals would be translated within a week and circulated in a way that it reached almost all Tamil youths who would be interested in reading political matters. In other words, the thinking population of Tamil Nadu, particularly the youth, had no access to anything other than anti-Modi propaganda.

This was matched by ground level activism. Preachers like Mohan C Lazarus and Jagath Caspar crisscrossed Tamil Nadu. For example, in Kanyakumari, where Pon. Radhakrishnan was the Bharatiya Janata Party (BJP) candidate, the developmental projects that he brought to the constituency were played up against him in a Luddite fervour by Christian fundamentalist preachers. In the case of Keeladi excavations, which became possible only because of the National Democratic Alliance sanctioning funds, ridiculous charges were levelled against the Modi government. An ordinary bureaucratic transfer was played up as Aryan conspiracy to cover up the Dravidian grandeur dug up during excavations.

In fact, in this magazine as well as its web portal, many of the lies peddled by the anti-Modi propaganda machine in Tamil Nadu have been exposed time and again. Yet, the larger BJP-Sangh organism failed in taking the real data to the public. At the same time, though not directly aligned with the DMK-Congress, the Tamil separatist forces like ‘Naam-Tamilar Katchi’ etc. shared with them the 'hate Modi’ axioms. So, when some strategists on the side of the BJP were hoping that these small parties might split the DMK vote, what actually happened was that the memetic contagion of Tamil separatism and 'Hate Modi’ thinking affected the voters almost en masse.

The failure is entirely on the side of the Hindutva forces. They have a charismatic leader in Arjun Sampath but the BJP leaders see him more as a threat to themselves than as the needed alternative. On the other hand, day in and day out, they wait for their messiah in the matinee idol Rajinikanth, who had treated the Tamil Nadu BJP in particular, and Hindutva in general, with a kind of aversion. He never opened his mouth on issues like insult of Andal. His recent movies like Kala have shown deep revulsion for Hinduism. Every time the local BJP leaders had spoken highly of him, he had snubbed them in public.

Another potential inhibitor to BJP growth in Tamil Nadu is Subramanian Swamy. His statements seem to have been aimed at reducing as much votes for the BJP in Tamil Nadu as possible. His interview to a Tamil channel, with his poor command of the language, makes any self-respecting Tamil feel an aversion towards him – not to mention his calculated arrogance. When the crusader in chief against corruption batted for corruption-convict Sasikala and her party, Tamil Nadu BJP supporters cringed. But for the average voter, the interview went down as a proof of the deceit of BJP against the Tamils. Yet, he is often projected by the media as the ‘senior BJP leader’, though the party hopper joined the BJP only in 2014.

Apart from Arjun Sampath, the leader of Puthiya Tamilagam (PT) party, Dr Krishnaswamy is a very important socio-political leader in Tamil Nadu. Beyond politics, he is vital for Tamil Nadu as a leader who shows how to take forward a community in the matrix of the society without compromising its welfare. The BJP-Sangh leadership should work with these two leaders and spread their message throughout Tamil Nadu.

All these factors worked in synergy against the BJP in Tamil Nadu. Today, the BJP and Anna Dravida Munnetra Kazhagam (AIADMK) should cement their alliance in the face of this electoral reverse. It should be remembered that in Tamil Nadu, M K Stalin has actually succeeded in creating a 2004-repeat in the absence of M K Karunanidhi. When the final tally comes, and even if the AIADMK+ gets one seat, it should be considered as a feat for the party because in the absence of J Jayalalithaa and with a party facing a split, Edappadi Palanisamy has been able to at least stop the complete sweep of the DMK.

And even if the DMK and alliance sweep all the seats, the AIADMK has been able to stop the capture of power in the state assembly by the DMK. So, if the AIADMK, continues with the BJP and cements its alliance, it would be be able to pull off a surprise victory in Tamil Nadu in the 2021 elections.

The victory of DMK-Congress in Tamil Nadu should worry the ‘Hindutvaites’ of Tamil Nadu. With the possible influx of radical Islamists into Tamil Nadu from Sri Lanka, the electoral success of an alliance that has many leaders in it, and who have openly sided with radical Islamists, means Tamil Nadu may become a safe haven for them and they may create an ideological and logistical network with both radical leftists and Tamil separatists.

So now, more than ever, all the building-India forces of Tamil Nadu should come together and create a dynamic ground-zero strategy. They need to work for the coming legislative assembly elections as well as for local body elections. Apart from that their hard toil for 2024 needs to start right now.