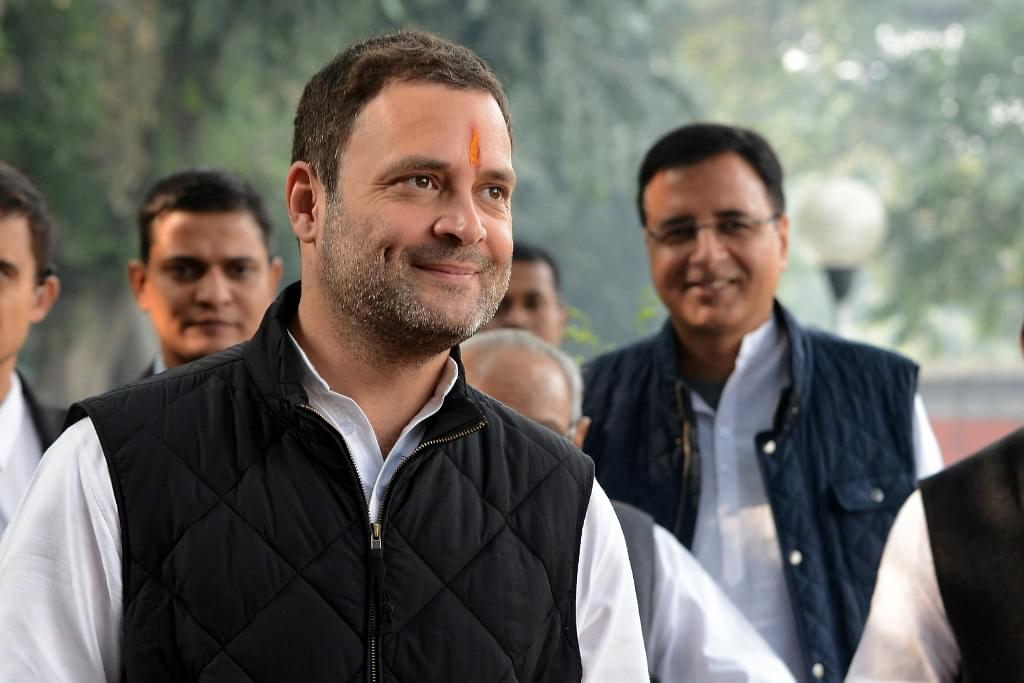 Two recent polls – one showing a sharp spike in Rahul Gandhi’s popularity and another indicating that the BJP could well lose all three states going to the polls this December (Rajasthan, MP, Chhattisgarh) – are straws in the wind. While many factors are responsible for these trends, including state-level anti-incumbency, the big takeout is that the opposition’s spin doctors (especially Rahul Gandhi’s) are doing better in terms of their narrative about the failures of the National Democratic Alliance (NDA) government than the Bharatiya Janata Party (BJP’s) own media experts are in projecting the government’s achievements. To lose the info war given the huge personal popularity of the Prime Minister means the BJP’s PR machine is simply not working.

While the Congress did not know what hit them in 2014, today it is the Narendra Modi government that is thrashing about wondering what is wrong with their messaging, or how people perceive its performance.

While it is always going to be easy for an opposition party to attack the government when the latter has to defend its record of governance, the early signals are that the Congress has managed to disrupt the Modi juggernaut. From silly actions like giving the PM a hug in Parliament, to blatant lies, Rahul Gandhi has managed to throw the government off balance. The Congress party’s dirty tricks are beginning to work.

There are three broad strands to the Rahul attacks.

First, distract public attention away from Modi and his achievements, and also from the Congress party’s own scams, including those involving members of the dynasty (National Herald, the Vadra real estate capers, etc), by lighting little fires all around the government.

While there has been much brouhaha over the Congress party’s attempts to rope in Cambridge Analytica, a controversial firm which has been accused of trying to influence election outcomes using Facebook and other social data, most elements of the Congress strategy to corner Modi and the BJP are not rocket science. They have been deployed elsewhere by PR firms. It is straight from the playbook of Bell Pottinger, a controversial British PR firm with a record of working for dubious clients. When the previous South African President, Jacob Zuma, was embroiled in scams, especially those involving the Gupta family, the latter hired Bell Pottinger to diffuse the cloud around Zuma, according to Hector Macdonald, who wrote about it in his book Truth: How the many sides to every story shape our reality. The book gives many examples of how politicians use alternate truths, often laced with some facts, to spin stories to deflect attention from the core issue.

The task before Bell was to take the spotlight off the Zuma-Gupta scams, and they did this by suddenly exacerbating racial tensions – tensions brought down by Nelson Mandela’s enlightened leadership. Bell sought to bring public focus to the concept of “economic apartheid”, which suggested that the minority white population still controlled the majority of the country’s economic resources (labelled “White monopoly capital”). Bell peddled data and research that emphasised this racial divide, a powerful narrative that one could easily buy in post-apartheid South Africa. The data was not untrue, but in the process, Mandela’s painstakingly crafted racial harmony was shattered.

This is exactly what the Congress is doing, whether it is by drumming up the north versus south faultline (on Hindi, alleged subsidisation of the north by the southern states, etc), or exacerbating the Hindu-Dalit divide by tom-tomming stray incidents of caste violence as somehow related directly to the BJP’s rule in several states.

The end-result is to shift focus away from Modi’s pro-poor narratives and the Congress dynasty’s scams by raising red herrings all over. So far it seems to be working.

Second, tar those around Modi in the hope that some of the mud sticks to him. In Macdonald’s book, he mentions how Rudy Giuliani’s Republican presidential nomination bid was scuppered by his opponents with the media drumming up stories on the personal peccadilloes of people close to him: one of his close aides was hauled up for distributing cocaine, while another was linked to a prostitution racket and a third for tax evasion. Though Giuliani himself had nothing to do with any of this, his nomination bid collapsed as he got associated in the voter’s mind with the alleged misdeeds of the people around him.

This is exactly what the Congress-supporting media is doing, by targeting weak links in Amit Shah’s son, Jay Shah’s business deals, Piyush Goyal’s sale of a firm he was associated with to the Piramals, and Shaurya Doval’s stewardship of India Foundation. Doval, son of the National Security Advisor, runs this right-leaning thinktank and some news reports alleged conflicts of interest since ministers were associated with the foundation.

The strategy is obvious: since the PM’s credibility itself is unassailable, target those around him. So far, this bid hasn’t succeeded, but at least the biased parts of Lutyens media is cock-a-hoop about these “revelations”. The fact that only the anti-Modi media has found something of value in these allegations tells its own story.

Third, Suppressio Veri, Suggestio Falsi. The third strand in the Congress arsenal is to make false allegations, and suppress reality. This part of the strategy began in 2015, when Rahul Gandhi made his famous “suit-boot-ki-sarkar” jibe in Parliament. This kind of shoot-and-scoot tactic was demonstrated first by Arvind Kejriwal before the 2014 elections, when he talked about Modi being the captive of Adani and Ambani, but at that time the voter was too captivated by the promise of Modi to give such allegations serious weight. Since then the NDA government has shown no visible favours to big business, and, in fact, India Inc has been miffed that the PM does not care to interact with them, but the allegations continue unabated. In the process, the reality that it was the Congress that was always in bed with crony businessmen (remember the voice in the Radia tapes talking about Congress being “apni dukaan”?) has now be obfuscated.

The allegations of huge kickbacks in the Rafale deal are one of a piece with this mud-slinging strategy. Without a shred of evidence, Rahul Gandhi has managed to cast doubts over a government-to-government deal with no middlemen in between. In the Bofors case, Sonia Gandhi’s pal Ottavio Quattrochi was caught with the goods; in this case, there is no smoking gun, but skulduggery has been bandied about without any proof.

On the other hand, the government’s real big achievements against crony business, where the Insolvency and Bankruptcy Code and other tough measures have forced big businessmen to exit their core businesses (Ruias, Jaiprakash, GMR, GVK and Ambani are some of those who had to exit their losing businesses), gets no attention beyond the pink press.

By beating the drum about absconding businessmen like Vijay Mallya or Nirav Modi, Congress spin doctors are able to palm off scams and loan defaults originating in their regime to the Modi era. Meanwhile, the fact that both Sonia Gandhi and Rahul Gandhi are out on bail in the trial for their National Herald caper can be painted as a case of victimisation by the Modi government. And this, when we have not received one clarificatory statement from either the Congress party or Sonia and Rahul on why they decided to shift ownership of National Herald, which owns properties worth a couple of thousand crores, to a private company owned by them using Congress party funds. Suppressio veri.

Another case involves the Supreme Court verdict which diluted some provisions of the SC/ST Atrocities Act. While Parliament has overturned that verdict by passing amendments to the Act, the Congress party and the opposition has managed to convey the impression that the Supreme Court did what it did because of the BJP government. Suggestio falsi.

There is little doubt that Rahul Gandhi’s team has disrupted the Modi narrative.

For Modi and the BJP, the challenge is clear. They need a strategy to disrupt the disrupter. Unfortunately, the Modi camp has not shown any great understanding of what is undercutting their case, and how to go about dismantling the Congress challenge.