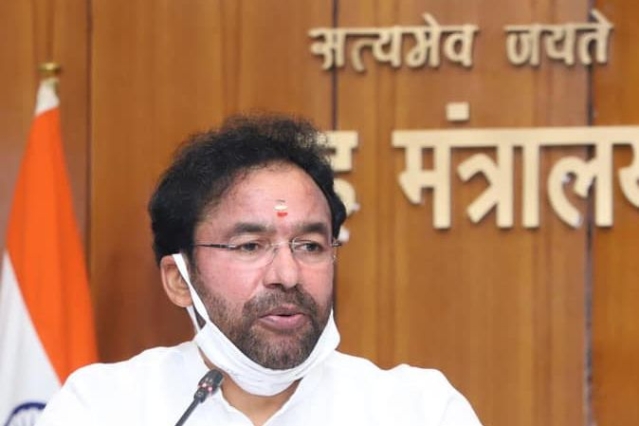 Shri G. Kishan Reddy, Minister of State for Home Affairs, Government of India, spoke about the Hyderabad Liberation Day to Bharatvaarta, a podcast platform, which conducted the discussion in association with Swarajya.

The Hyderabad Liberation Day is hugely important for the people of Telangana. It is also celebrated in Marathwada region and some areas of modern day Karnataka, which were also part of the old Hyderabad state.

Reddy explained that although India got independence on 15 August 1947 from British rule, the state of Hyderabad had to wait 15 more months to really enjoy this freedom. It was only on 17 September 1948 that Hyderabad merged with the Indian Union.

He talked at length about the freedom gained from the tyrannical rule of Nizam Mir Osman Ali Khan, whose Razakar Army went on a rampage on Nizam’s wishes. This army pillaged, killed and raped people to let Nizam stay out of the Indian Union and merge with Pakistan.

However, a people's movement, led by doyens like Swami Ramanand Tirth, PV Narasimha Rao and tribal leader Komaram Bheem ensured that the Nizam was weakened. Reddy explained how Operation Polo, led by Sardar Vallabhbhai Patel, India's first Home Minister, ensured that there was no balkanisation of our independent nation.

He expressed his anguish at how the matters of history and real achievement of Indian people have been brushed under the carpet due to contemporary politics. Reddy said that it was only due to the efforts of the Bharatiya Janata Party (BJP) that the Hyderabad Liberation Day had become a mass movement. The ruling Telangana Rashtra Samiti (TRS) would never celebrate it publicly under the influence of their ally, the All India Majlis-E-Ittehadul Muslimeen (AIMIM).

He said that the AIMIM carries the legacy of the Razakar army and to appease the party, the TRS has given up on this day, despite coming to power in the state of Telangana on the premise of regional pride. He also accused Congress and Telugu Desham Party (TDP) of ignoring the Hyderabad Liberation Day publicly.

Reddy talked about how even a grand empire like the Vijayanagara empire isn't talked about much when we discuss history. He lamented about the Marxist influence on Indian history writing, which he said was ‘extensive and debilitating’. However, he expressed hope that over the years, things were changing. He said that the use of social media had democratised information and brought the real history of Indian civilisation to the people

Reddy paid rich tributes to Sardar Patel, who he mentioned was a big force and not just an individual. He explained how one of his first tasks after coming to North Block was to put a statue of Sardar Patel in his cabin. Reddy said he felt humbled by working in the same ministry occupied by Sardar Patel and then later by Lal Krishna Advani and Amit Shah, the current Home Minister, Government of India.

Reddy called Sardar Patel the architect of modern India. He said that the role of police action via Operation Polo was critical in beating the Nizam.

He made an observation on the famous picture taken at the Hyderabad airport soon after the state fell to Indian troops. In this picture, the Nizam is standing with folded hands and receiving Sardar Patel.

Reddy said that despite the victory, Sardar Patel did not humiliate anyone and left doors open for integration. He said he has appreciated how Sardar Patel appeared so calm and humble even in the picture of his victory and glory.

Reddy talked about Statue of Unity - the dream of Prime Minister Narendra Modi, that he saw as the Chief Minister of Gujarat. He said that a statue which had contribution from people around the country was a fitting and true tribute to the great Sardar.

Reddy also briefly talked about the vision for Telangana state. He said that the state can not be private property of two families. He was referring to the Kalvakuntala (Chief Minister K Chandrasekhar Rao) and Owaisi families. He asserted that the people did not pay with their lives during the Hyderabad Liberation movement and later the movement for formation of a separate state to concentrate power with just two families.

Reddy recalled the role of the BJP in forming the state of Telangana, without which the Parliamentary majority for the birth of the new state would not have been possible. He explained how the development in the state had to go to the interior regions and not just stay limited to Hyderabad.

Talking about the eventful tenure at the Home Ministry, he explained that a lot had been achieved in a year. In fact even though Covid-19 had taken away almost six months from the year, Home Ministry played the pivotal role in that fight too.

But before that, achievements like removal of Article 370, Home Ministry’s administrative role during the Supreme Court judgment on Ayodhya and later during the bhoomi poojan and the enactment of the Citizenship Amendment Act were key highlights of the last year.

He recalled how he entered politics chanting slogans demanding removal of Article 370 from Jammu and Kashmir and hence it was a dream when it not only happened, but he was personally involved in the Parliamentary proceedings.

He closed the interview exhorting the people of Telangana to celebrate the Hyderabad Liberation Day with fervour and pride. He asked fellow citizens to hoist the tiranga in their houses even if the state government failed to celebrate the day officially.

He said that the real tribute to the heroes of the liberation movement would be to remember their courage and sacrifices. He also appealed to the people to pay tributes to the greatness of Sardar Patel without whom, the country would not have come together the way it did after the Independence. Reddy said that the BJP would continue to highlight the importance of the Hyderabad Liberation Day and he will also work towards this cause personally.