Thanks, Siddu, For Sparing The Mutts. Now How About Freeing The Rest Of Karnataka’s Temples? 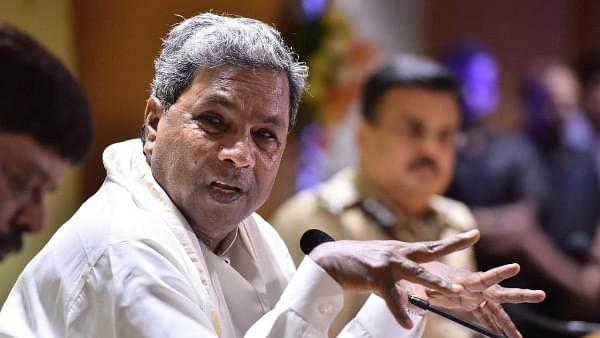 Karnataka Chief Minister Siddaramaiah has said that his “government does not, and will never, intend to take control of religious institutions in the state.” (Arijit Sen/Hindustan Times via Getty Images)

The speed with which the Siddaramaiah government in Karnataka has reversed a proposal to take over some Hindu mutts and temples shows how the mere possibility of a Hindu vote consolidation in the election-bound state can be so powerful.

With opposition Bharatiya Janata Party (BJP) leader K S Eshwarappa charging the government with wanting to take over “majority institutions”, Siddaramaiah said, according to the Times of India, that there was “nothing anti-Hindu” about the proposal, but stated categorically: “The government does not, and will never, intend to take control of religious institutions in the state.”

That’s a big promise, and not a small victory for organisations fighting in courts and in public fora to free temples from government control in much of southern India. If Siddaramaiah wants to be a true Hindu hero, he can extend his promise to the thousands of temples that his government already controls.

One positive result of the BJP’s emergence as the main pole of politics at the centre and many states is that there is now greater appreciation of Hindu sensibilities in “secular” politics. The rise of Narendra Modi has made Rahul Gandhi a “Shiv-bhakt” and “janeu-dhari Hindu”, Siddaramaiah has declared himself a Hindu, a Congress politician in Mumbai sends press releases to tell the public that he visited Sabarimala, and Shashi Tharoor writes a book explaining “Why I am a Hindu”. A closer reading of the book may reveal that he has declared his religious affiliation purely to denigrate other Hindu outfits that are more politically assertive, but we shall let that pass at this stage.

There is, though, a problem in being too happy with this change in political winds. While electoral politics forces ideologies inimical to Hinduism to mute their negativity, it does not really do much to get the state out of temples or interference in Hindu institutions. In fact, even the BJP does not push this idea far, and, as Siddaramaiah himself pointed out, the notice calling for the takeover of Mutts was no different from the one issued by the earlier BJP government. In no BJP-ruled state has there been any effort to strengthen the independence of majority institutions, whether it is temple properties or schools.

If Eshwarappa is serious about the charge he made against Siddaramaiah, he should get his party to state unequivocally that if it comes to power, it will – in stages – hand over temple administrations back to committees of devotees. The same applies to Siddaramaiah: if he won’t take over Mutts, by what logic can the remaining temples now under the Hindu Religious and Charitable Endowments Act be retained there?

The problem is that the major temples generate lots of money, and politicians want to control these flows and possibly use it to their advantage. This is why no politician, whether belonging to a Hindu party or a “secular” one, is willing to change the tide. Since control of mosques and churches is out of bounds for them under the Constitution, they feast on Hindu institutions instead, thus subverting the intent of the founding document. The presumption in the Constitution was that the majority can defend its institutions, but the minority cannot. This proposition has been proven wrong repeatedly in India.

The message for ordinary Hindus and non-political Hindu organisations is simple: you can’t depend only on politicians to deliver even on a positive Hindu agenda of freeing temples and institutions from government control, even when there is no communal or anti-minority angle in it.

Worse, while nominally “secular” parties can occasionally pander to a Hindu vote, “Hindu” parties like the BJP may be under pressure to woo the marginal minority vote and ignore their core support base, as has largely been the case with BJP governments over the last few years.

Clearly, there is a need for a broader umbrella of Hindu organisations that consistently fight in courts and other fora to prosecute a minimum Hindu agenda for equal rights under the Constitution.

The Karnataka victory is just a pit stop in a long battle. Those who control the money in temples won’t give up easily.