The ‘5Cs’ Approach To Kashmir Crisis: Why Reaching Out To All Stakeholders Looks Promising 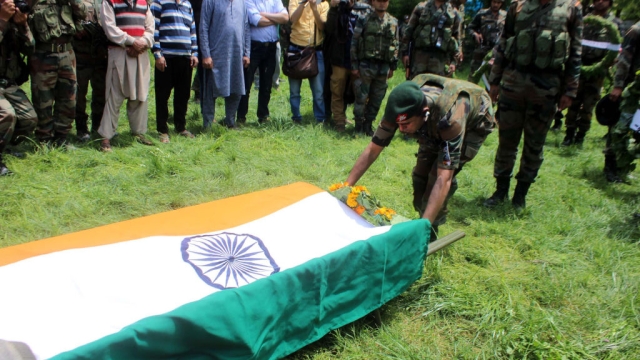 As India commemorated Gandhi Jayanti on 2 October, a date declared as the International Day of Non-Violence by the United Nations, Ashiq Hussain, a Head Constable of Jammu and Kashmir Police was shot dead by the terrorists in Awantipora, a place named after the ninth-century Hindu king Avantivarman. News reports suggested that Hussain was targeted when he was returning home after attending the wedding of a relative.

Hours after he was killed, terrorists belonging to Jaish-e-Mohammed targeted the Border Security Forces’ (BSF) 182 Battalion camp in Srinagar in a pre-dawn fidayeen attack, leaving three personnel injured and one dead. Security agencies believe that the original target was Srinagar airport, but that the airport was not attacked due to very high security in that area. So, the Jaish terrorists attacked the BSF camp nearby. Had the security forces not shown alacrity in repulsing the attack, the number of casualties would have been much higher.

In the 48-hour period preceding and following the killing of Hussain and the attack on BSF camp in Srinagar, terrorists had also killed a young man, Showkat Ahmad Dar, whose bullet-riddled body was found at Qazigand in Kulgam district. His face had been mutilated. The terrorists also killed 55-year-old Ghulam Rasool Ganie, a former sarpanch belonging to the ruling Peoples Democratic Party (PDP).

While such violence and killings may not be a new phenomenon in the state, a new pattern seems to have emerged in the more recent past. In many instances, terrorists, specifically those who are not locals or are from the Kashmir Valley, have targeted Kashmiris who are serving in India's Armed Forces, Central Paramilitary Forces, Jammu and Kashmir Police, or those who are associated with democracy at the grassroots level, in the past few months. It can be discerned by the terrorists’ choice of targets that they want to strike fear and discourage young Kashmiris, who want to stand with the rest of India in thwarting their designs. It is keeping in line with this pattern that the terrorists have targeted defence and paramilitary personnel recently. Mohammed Ramzan Parray, a BSF constable, was killed after Lashkar-e-Taiba terrorists barged into his house in Hajin in North Kashmir’s Bandipora district. Parray was back home for holidays.

Earlier, in the summer of 2017, terrorists had ambushed a jeep of Jammu and Kashmir Police, killing six policemen in Anantnag district. The slain policemen included the young Station House Officer of the Achabal Police Station, Feroz Ahmad Dar. The difficult conditions in which the security personnel of the Jammu and Kashmir operate is well depicted in a 2013 Facebook post by the late Sub-Inspector Dar in which he wrote about how his first night would be in his grave. This constant shadow of death looms over the security forces operating against the terrorists in the state.

Seven-year-old Zohra had innocently enquired whether her father would suffocate after seeing him inside the coffin. She was told that her father would come on Eid and bring her new clothes. She was expecting her father Abdul Rashid, a Sub-Inspector of Jammu and Kashmir Police, to join the rest of the family for her cousin’s wedding. What she had not been told then was that her father was killed by terrorists in South Kashmir’s Anantnag district as he was heading to a police station on 28 August 2017. Just two days prior to this, eight security personnel were killed in a fidayeen attack on the District Police Complex in Pulwama. In a remarkable gesture, cricketer Gautam Gambhir promised to support the education of Rashid’s daughter Zohra, who wants to become a doctor.

It was to become a doctor that another young Kashmiri had gone to Mumbai, his parents would claim. They were too apprehensive to reveal to people around them that their son Umar Fayaz was, in fact, in Pune at the National Defence Academy, training to become an officer in the Indian Army. He had been commissioned into 2nd Rajputana Rifles, the unit that won Tololing for India in the 1999 Kargil conflict. It was barely six months before he was picked up by three pheran-wearing terrorists when he was sitting with the bride at his cousin’s wedding. Lieutenant Fayaz was unarmed. His body was found on 10 May at Harmain in Shopian district. He was the only son of his parents.

Another incident that was initially suspected to be a case of mob-lynching turned out to be the handiwork of terrorists. Deputy Superintendent of Police Mohammed Ayub Pandith was lynched by a mob outside Jamia Masjid at Nowhatta in Srinagar during Ramzan. According to reports in the media, Pandith was stripped and stoned to death. The terrorist who had played an important role in the lynching of Pandith was Sajid Ahmad Gilkar, who was killed three weeks later in an encounter with the security forces in Budgam district.

The security forces had intensified their operations ever since the killing of high-profile terrorist Burhan Wani in July last year. In a video message, Wani had urged the youth of Kashmir to take up arms to establish a caliphate. In another video released in June 2016, he had warned anyone including those security personnel who stood for India or its Constitution. In the same video, Wani had also warned of attacks on sainik and Kashmiri Pandit colonies. Zakir Musa, who had succeeded Burhan Wani as the divisional commander of Hizbul Mujahideen in the Valley, declared in May 2017 that his fight was exclusively for Islam and the establishment of Sharia rule in Kashmir. Musa was later expelled from the Hizbul Mujahideen over ideological differences. His expulsion signalled a sort of ideological split among the controllers of terrorist activities in Kashmir. Musa had even gone to the extent of warning the Hurriyat leaders that he would “behead” and “hang them” in Lal Chowk if they continued to describe the “struggle” in Kashmir as political and not a religious one.

Musa’s successor, Sabzar Bhat, was gunned down in an encounter by the security forces shortly after taking over in May 2017. He was succeeded by Riyaz Naikoo, who is considered to be a moderate. Naikoo had even invited Kashmiri Pandits to return to the Valley. Dissociating with the stance of Musa, Naikoo, while speaking at the funeral of a terrorist in July, had even said that the “movement” in Kashmir has nothing to do with global terrorist groups such as Al Qaeda, but at the same time added that the Pakistani flag is “our flag”. Later in an audio released in September, Naikoo called former Hizbul commander Zakir Musa his brother. This series of flip-flops could imply that handlers of terrorism in the Valley may be confused about the future course that their activities should take, especially given that the government has pushed them into a difficult corner.

The union government, on its part, seems to have adopted a carefully calibrated approach to the developments in the Valley following the death of Wani last year. The security forces on the ground have adopted a stringent approach in dealing with Pakistan-backed terrorists, whether local or foreign. While in 2016, around 165 terrorists were killed by the security forces in the Valley, the number of terrorists killed until August this year has already reached around 140. In addition to the operations carried out by the security forces on the ground, the National Investigation Agency (NIA) and Enforcement Directorate (ED) are also cracking down on those who indulge in terror funding, especially the top leaders of the Hurriyat Conference, in the Valley.

At the same time, the central government has given enough hints indicating its openness to engage in a dialogue with all the stakeholders. BJP general secretary in-charge of Jammu and Kashmir, Ram Madhav during a visit to Jammu and Kashmir in the third week of September said that the government’s doors were open to all the stakeholders of the state, and they were welcome to have a dialogue with the state government as well as the central government without any preconditions. Earlier, in the month of September, Union Home Minister Rajnath Singh undertook a three-day visit to Jammu and Kashmir and assessed the prevailing situation. Singh even declared that if there was a need to visit Kashmir 50 times a year, he would do so. He told reporters that a permanent solution to the Kashmir issue was based on 5Cs – compassion, communication, co-existence, confidence building and consistency.

The outreach from the centre comes after Prime Minister Narendra Modi said in his Independence Day speech, “Na goli se, na gaali se, Kashmir ki samasya suljhegi gale lagaane se” (neither bullet nor abuses, the problem of Kashmir will be resolved only by embracing the people of Kashmir). However, in the same speech, the Prime Minister had said that India would not be soft on terrorists or terrorism. The subsequent visits by Singh and Madhav were aimed at reaching out to all stakeholders in the Valley and emphasising that the central and state governments were open and willing to engage in a dialogue to resolve the problems in Jammu and Kashmir.

This position of the central government is a marked departure from its position exactly a year ago in September 2016, when the unrest in the Valley was at its peak. Madhav had then dismissed suggestions of a “political solution” to the Kashmir issue. He had said that “not talking is also a part of the strategy (of the government in Kashmir)”. Whether the new approach adopted by the centre will lead to any fruition will only be known in the future. PDP, the alliance partner of the BJP in Jammu and Kashmir, immediately welcomed Madhav’s statements on talks with all the stakeholders. The leaders of Hurriyat Conference also cautiously welcomed the move. Perhaps this was largely due to the money laundering and terror funding cases being pursued against its top leaders by the NIA and ED (Shabir Shah was also arrested by the ED).

Burhan Wani, Zakir Musa and Lieutenant Umar Fayaz were of the same age. While Lieutenant Fayaz chose to serve the country by joining the Army, thereby becoming the right kind of role model for the youth of the Valley, the other two chose to become militants and spread terror among the average Kashmiris. If the latest move adopted by the government in Kashmir sees any progress, it would in some way restore normality in the strife-torn Valley.