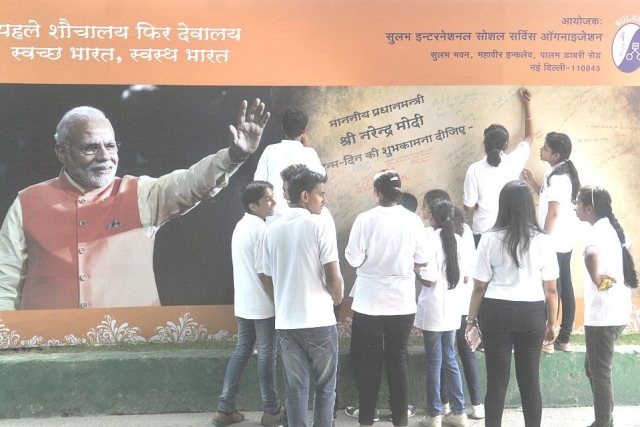 School children writing the messages on the poster put up to celebrate the 65th birthday of Narendra Modi at FICCI Auditorium on 17 September, 2015 in New Delhi (Sushil Kumar/Hindustan Times via GettyImages)

Age is just a number, they say. However, in life and in politics, age does matter. Many a time, politicians of older generations completely lose their hold on the pulse of the youth because youngsters simply cannot identify themselves with some ideas. However, age hasn’t mattered when it comes to Narendra Modi and the millennials.

If you had any doubts about this, pull up the video link of Modi’s recent Pariksha Pe Charcha 2.0 interaction and listen to the roar when he uttered the word ‘PUBG’. While some may think it was a cheer for the online multi-player game, it was not. It was for the fact that the mostly millennial crowd, not even of voting age, found it astonishing that a prime minister would know something about PUBG.

For a 68-year-old to establish this sort of rockstar-like connect with the millennials is a feat in politics that hasn’t been analysed enough. There was a good 50-year age difference between Modi and the median age of the audience, perhaps.

Modi wants to interact with students in their own language and often does. He tweets to young sportspersons. He becomes part of a viral social media trend on fitness. He writes a book for exam-facing students. He speaks about artificial intelligence, big data and internet of things (but not about connecting MRIs, thankfully). Modi is an outlier in the political arena in this respect.

Compare Modi’s outreach with, say, the worn out, almost 1970s like anti-industry, anti-aspirational, povertarian rhetoric that Rahul Gandhi on the opposite side of the aisle employs. In a particularly disastrous interaction with students in Mount Carmel College, Bengaluru, I remember he was going on the offensive politically but did not present a single idea that would excite a young person.

There are key elections in a few weeks and here was Modi speaking to exam-facing children, asking them to think big, even as yet another Nehru family scion promised to end poverty (fourth time in four decades?), this time with a not-so-universal basic income proposal.

Modi, in his interaction with students, spoke of PUBG, playstations, expectations, career choices and dealing with depression and more. Contrast this with Arvind Kejriwal who, like Rahul Gandhi, is much younger than Modi. He was recently found making ham-handed appeals to students and their parents – asking parents to vote for him if they loved their children and to vote Modi if they did not. Within the space of a couple of days, both Modi and Kejriwal spoke to students and their parents, but the difference was not of shades but of the whole spectrum itself.

In Pariksha Pe Charcha 2.0, about 2,000 youngsters, from school-going ones to those pursuing graduation were present at the venue. Many youngsters from the Indian diaspora abroad joined in from various locations across the world. Parents and teachers of students too were there. Modi took questions from them and gave some memorably coined ‘life hacks’, as a millennial would say.

While expectations are good and indeed, drive us towards achievement, they must be tied to the potential of the child, without which they become unreal, Modi said. This comes as much needed sanity in a world where the same child is expected to ace in dance, music (often an instrument and vocal both), debate, quiz, three languages, poetry, essay-writing and math.

The child is also expected to breathe when he or she finds the time between all these activities. I am all for driving children to become better in a world of ever-increasing competition. But it is also true that there are enough parents out there who drive their children to desperation and depression. Modi summed it up pithily with - “do not make the report card of your child your visiting card”.

On choosing the right career for oneself, Modi told students that they should aim big but break it into smaller goals. And goals, he said, should be such that “pahunch mein ho par pakad mein nahi” (within reach but not within grasp). Essentially, he was saying our goals must be realistic and within our reach so that they are practically achievable, but at the same time they must also not be something we know we can easily achieve, which would kill all motivation.

“Do not immediately oppose what your parents say but pretend to listen”, Modi advised a child when asked how to communicate better with parents. It is the act of listening that builds trust and once you have heard your parents out, consider it and later, go back to them to disagree calmly, said Modi, the man who has worked with people and teams for decades now.

When asked what drives him through his famed but punishing work schedule, Modi asked in return if they’ve seen their mothers tire. Just the way your mother takes ownership of the family and never tires, I feel an ownership towards my country, he said.

‘Express rather than suppress’, he told students, when someone spoke about depression and homesickness in students. In a remarkable note, Modi reassured parents that getting professional help for a depressed child shouldn’t be seen as some sort of a stigma. Remove thoughts of what will four people say, and prioritise your child’s health over such thoughts, he seemed to say.

Modi spoke to teachers about making learning more exciting, about paying attention to all students equitably, and also about watching students for signs of depression.

Overall, this was a punchy pep talk with a whole ecosystem that faces exams, because it is not students alone who face exams but also their teachers and parents. It was also an instructive illustration of why Modi appeals to the millennials – he speaks the language of aspiration, goes to youth conclaves and hackathons, specifically addresses those born in the year 2000 on his radio show , welcomes them to electoral democracy, and doesn’t come across as sarkari or cynical. His messaging is on-point and relevant to the concerns of millennials, and most importantly, he knows where not to make political pitches.