The Battle For Barrackpore: A Prestige Issue Not Just For Contestants 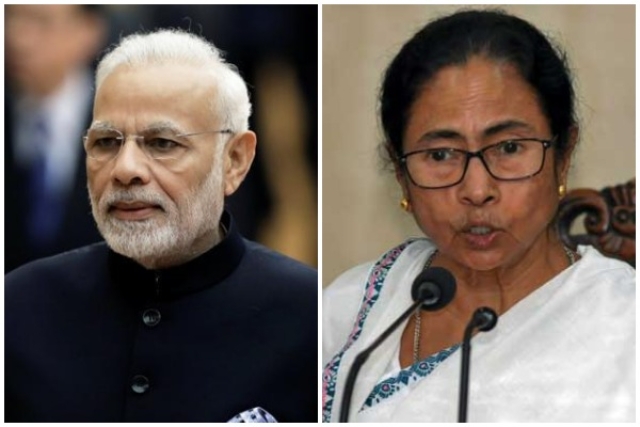 Barrackpore, which stretches from the northwestern edge of Kolkata into the adjoining North 24 Parganas district, is witnessing a tough battle. At stake are not just the reputations and political fortunes of the two primary contestants — the Bharatiya Janata Party’s (BJP’s) Arjun Singh and the Trinamool’s Dinesh Trivedi — but also those of a father-son duo. There are many interesting similarities, differences and twists in the electoral battle that rages in this erstwhile cantonment town-turned industrial graveyard.

Arjun Singh, who has been fielded by the BJP, was with the Trinamool until a few weeks ago. He was known as a Trinamool strongman in Barrackpore and is renowned for his ‘election management’ skills. Singh is believed to have been instrumental in the successive victories (in 2009 and 2014) of Dinesh Trivedi from Barrackpore.

Singh has been the Trinamool MLA from Bhatpara Assembly constituency (a segment within the Barrackpore Lok Sabha seat) since 2001 and even contested this Lok Sabha seat on the Trinamool ticket in 2004 against six-time Member of Parliament and Communist Party of India-Marxist or CPI-M strongman Tarit Baran Topdar. Though he lost to Topdar, Singh put up a good fight and bagged nearly 35 per cent of the votes.

Singh had wanted the Trinamool ticket to contest the Lok Sabha polls from Barrackpore this time, but party chief Mamata Banerjee turned down his demand unceremoniously. According to Trinamool insiders, Mamata Banerjee was apprehensive of Singh’s growing clout in North 24 Parganas district and wanted to clip his wings.

Singh, a politician in his own right who won elections on his own might without depending on Banerjee, felt slighted. “He had been rebuffed and humiliated many times by Mamata Banerjee in the recent past. Her ears were poisoned by some top Trinamool leaders, who felt threatened by Arjun Singh. Singh also disliked Mamata Banerjee’s authoritarian nature and her mercurial temperament that he found difficult to digest,” said a Trinamool leader, who is close to Dinesh Trivedi.

Dinesh Trivedi, too, has had his share of run-ins with Mamata Banerjee. He was forced to resign by Mamata Banerjee as Railway Minister — a job he got from the Trinamool chief after she resigned as Railway Minister to become the chief minister in 2011 — in March 2012 after he presented the railway budget that proposed hiking rail fares. The populist Banerjee who is opposed to fare hikes publicly announced that Trivedi would no longer continue to be Railway Minister. Trivedi suffered the humiliation and put in his papers.

“But Trivedi could not really defy Mamata and leave the party since his business interests — he owns a freight company based in Kolkata — are in Bengal. Knowing Mamata Banerjee’s reputation for vengeance and vindictiveness, he suffered his humiliation in silence and kept a low profile. He knew that defying the party chief would cost him dear. Also, he is a gentleman who does not have the stomach for a bruising battle,” said a close aide of Trivedi.

Trivedi, after his resignation as Railway Minister, kept a low profile and was rewarded for his subservience by Banerjee by being re-nominated as the Trinamool candidate from the Barrackpore Lok Sabha seat in 2014.

Banerjee replaced Trivedi as Railway Minister with her close aide Mukul Roy. Roy rescinded the fare hike proposed by Trivedi in the Railway Budget. Roy, who was the national vice-president of the Trinamool and is credited with building and strengthening the party organisation, fell out with Banerjee over the Saradha scam and the Narada sting operation.

Roy’s name came up in both the cases, and Banerjee suspected Roy of having let out details of the involvement of other Trinamool leaders in the cases to the Central Bureau of Investigation (CBI) and other central agencies in order to save his own skin. After he met Union Finance Minister Arun Jaitley and BJP’s Bengal minder Kailash Vijayvargiya, he was suspended from the Trinamool. Roy quit the Trinamool in September 2017 and joined the BJP November that year.

“Subhrangshu is under huge pressure to repeat 2014 and give Trivedi a huge lead from his constituency once again. If Trivedi does not fare well in the Bijpur segment, Subhrangshu will be blamed and his loyalty to the Trinamool will be doubted. On the other hand, Mukul Roy is also under pressure to ensure the defeat of his former colleague (Trivedi) and the victory of Singh, who is considered to be Roy’s protege. Roy was instrumental in wooing Singh and inducting him into the BJP,” said Parthapratim Mujumder, who was a close associate of Subhrangshu till he (Majumder) severed all links with political parties to start a school in Naihati (another assembly segment within Barrackpore Lok Sabha seat. Naihati was the hometown of stalwart Bankim Chandra Chatterjee.

Barrackpore gets its name from the English word ‘barracks’ (accommodation for soldiers) since the British set up a large cantonment here. It was a flourishing river port that found mention in the accounts of Greek navigators and other chroniclers from the 1st century BCE to 3rd century CE.

When the East India Company set up a cantonment here in 1771, it was already a busy river port with a large settlement of traders and workers on the banks of the (Hooghly) river. The vast expanse of verdant farmlands and forests around this town prompted the British to build a regal weekend retreat (or ‘country house’) for the viceroy here. It is now called the Flag Staff House and is used occasionally by the Bengal Governor.

Barrackpore, perhaps fittingly in the modern context, has a history of mutinies. The first was the Barrackpore Mutiny of 1824, when soldiers of the 47th Bengal Native Infantry revolted against lack of food, facilities and their forced transportation to Burma on ships to fight the first Anglo-Burmese War (1824-26). The revolt was suppressed by brute force and an estimated 180 Indian soldiers were gunned down while a larger number were hanged to death.

The 1857 mutiny, also called the first war of Indian independence, was triggered from Barrackpore by sepoy Mangal Pandey. The limited and short-lived revolt by Trivedi against his party supremo Banerjee while he was the Railway Minister, and the one by Arjun Singh against Banerjee last month, would thus appear to be in keeping with Barrackpore’s traditions.

During the British rule, Barrackpore started emerging as a major industrial centre. Thanks to its advantageous location on the banks of the Hooghly and its close proximity to Kolkata, a number of jute and cotton mills came up there. The British also established an ordnance factory and an Air Force station. A paper mill and many other factories came up in Barrackpore. The industrial units attracted workers from Odisha, Bihar and Uttar Pradesh and, thus, Hindi-speaking people (all Hindus) make for about 40 per cent of the electorate here.

The communists, who ruled over Bengal for 34 years since 1977, sounded the death-knell for nearly all industrial units in Barrackpore, which has turned into an industrial graveyard. Almost all the factories have shut down, and all that remains of these flourishing industries are rusted industrial sheds and chimneys sitting in the midst of shrubs and wild foliage. The land where many of these factories once stood have been sold to realtors and high-rise residential apartment blocks have come up there.

Unemployment, which is rife, is the biggest election issue here. But the Trinamool does not have much to offer except empty promises. Locals say that Dinesh Trivedi has done nothing to revive the sick or closed industrial units or bring in fresh investments.

“He (Trivedi) has been our MP since 2009, but has been totally unsuccessful in addressing the unemployment problem here,” says Sagar Sonkar, 28, whose father was a supervisor of a jute mill. Sagar’s father lost his job and since then, the family has been dependant on the earnings of his elder brother Balraj, who works at a steel mill in Hooghly.

Trivedi, however, enjoys a clean reputation and is known as a gentleman who has time for everybody. “He may be a good person who listens to us with patience, but that is all. Being only good doesn’t solve our problems,”said Ajay Singh, a small trader in Barrackpore town.

Trivedi is seen as the ‘right man in the wrong party’, thanks to the alleged hooliganism of his party workers. “He (Trivedi) has not been a successful MP. He has not been able to do anything for Barrackpore. Perhaps his own party chief doesn’t trust him, or he doesn’t have enough leverage within his party to do anything for Barrackpore,” says Amit Kumar, an employee at the railway yard at Noapara.

Arjun Singh, on the other hand, has the reputation of a strongman. He is nowhere as suave as Trivedi and has a large following among the young men of the constituency. But he is seen as an achiever.

“He (Arjun Singh) did a lot for Bhatpara as its MLA. He got jobs for the locals, got roads built and many benefitted from the state government’s free housing and other welfare measures. It was because of Arjun Singh that we got so many benefits. Other MLAs have not been able to get as much benefits as Arjun Singh got for Bhatpara,” said Paramvir Yadav, a milk supplier, who also runs a grocery store at Barrackpore town.

Many say that votes will be cast not in the name of the candidates, but for Narendra Modi and Mamata Banerjee. “This is a Lok Sabha election as we all know an MP has limited powers to do any major works for his constituency. So votes will be cast for either the BJP or the Trinamool,” says Brij Mohan Singh, a retired employee of the Ichapur Rifle Factory.

His colleague and friend Badrinath Mondal agrees wholeheartedly. “This election is about ensuring the country’s progress and safety. Individual candidates don’t matter. People will vote to strengthen the hands of either Modi or for chaos and decline,” he said.

The BJP has made firm inroads in this constituency over the past one decade. In the 2009 Lok Sabha polls, the BJP’s Prabhakar Tewari garnered a mere 3.56 per cent vote share while Dinesh Trivedi got a whopping 49.28 per cent and CPI-M’s Topdar got 42.84 per cent. But in the 2014 polls, the BJP’s Rumesh Kumar Handa (a former police officer) got a respectable 18.36 per cent votes while the CPI-M’s vote share declined by 16.92 per cent and the Trianmool’s by 3.69 per cent. Since then, the BJP has become very strong organisationally and has been able to enrol thousands of young men and women into the party fold.

The BJP’s appeal is apparent among the Hindi-speaking people of Barrackpore. And they have influenced the Bengali Hindu voters, who form another 36 per cent of the electorate here, as well. The BJP’s campaign has highlighted the party’s strong nationalist agenda, and it has sharply attacked Banerjee for her perceived soft stance towards Pakistan.

“The Balakot strikes and Banerjee’s doubts regarding that, as well as blatant appeasement of Muslims by the Trinamool, are the primary issues here,” said Rabindranath Jaiswal, a railway employee.