The BJP And Ram Temple: Its Lok Sabha Majority Is Alienating The Party From Its Base 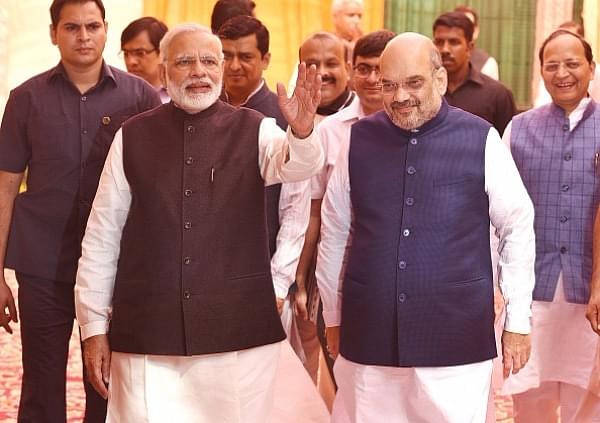 With the Vishwa Hindu Parishad (VHP) and the Rashtriya Swayamsevak Sangh (RSS) backing the idea of promulgating a law to enable the construction of a Ram Temple in Ayodhya, the Narendra Modi government has been pushed into a corner. It will be damned if it does, damned if it doesn’t.

A law, of course, won’t get the temple. Even if the Centre promulgates an ordinance to enable a Ram temple to be constructed at the Ram Janmabhoomi site, it is by no means certain that the Rajya Sabha will pass it too when the ordinance comes up for legislation. Moreover, the law will be challenged in the Supreme Court, thus bringing us back to square one. At best, the Bharatiya Janata Party (BJP) can claim that it did the best, and that is the only purpose of making such a demand before the polls.

There is also another political reality. Any temple built against the wishes, or without at least the grudging acquiescence, of the Muslim parties involved in the court challenge, will become a permanent target for terrorists and spark more communal discord in its wake. Barring a few fringe elements, ordinary Hindus will not want this to happen.

A third reality: compromise solutions are less likely with the BJP in power, unless they are driven by unconnected third parties, since it will always be seen as Hindu bullying of the minorities. The Modi government, despite having a Lok Sabha majority, has actually done little to push any Hindu agenda, leave alone a Ram temple, but it is stuck with the perception that it is doing so. The more the BJP pushes for a Ram temple, the greater will be the opposition to it. So, Congress leader C P Joshi’s boast, that only a Congress prime minister can get the Ram temple built, is not far off the mark. If the Congress wants to, it will fit the role of honest broker between the two sides better than the BJP for the simple reason that it is not seen as trying to shove the idea down Muslim throats. When given a choice of deciding whether the Congress or the BJP should be given the credit for building the temple, Muslims inclined to accept a compromise will most probably plump for the Congress.

Branded as a Hindu party in terms of popular perceptions, the BJP has to prove itself to be more secular than the Congress in order to hold the broad middle ground in politics. This is probably one reason why, despite having a Lok Sabha majority, the BJP managed to do almost nothing for its core constituency.

Consider the power and clout of the Indian Union Muslim League in Kerala. With a Muslim population share of 27 per cent, the league wields more power than the Congress in the state, which is in the secular middle, and thus unable to take strong positions on any issue. The same applies to the Kerala Congress and Christian politicians in the Congress. They wield more power because they do not have to speak for the entire electorate.

When it comes to the BJP, its core Hindu vote is probably around 15-20 per cent, and it would be more powerful and truer to its base if it focused on keeping this group happy than trying to expand its base endlessly, which makes it increasingly irrelevant to its base. The BJP’s natural base, in terms of Lok Sabha seats, is in the range of 100-180 seats, and its power will increase if it can leverage this base in future parliaments. Future coalitions will be happy to have a party with this many seats backing it. It means the BJP can bargain hard for its key demands – whether it is a Ram temple or a ban on conversions or something else. Even if it does not get everything, it can get something, and its base will be happy.

At 282 seats, the BJP is forced to be all things to all people. Thus, it cannot deliver anything to its core voter base. At 100-180 seats, it will wield more power than almost any party in India in an era of coalitions. Even when out of power, its sheer size will force all other parties to agree to at least one part of the agenda.

Maybe, just maybe, the BJP should consider backing the idea of proportional representation in parliament. In the vote range of 20-30 per cent, depending on which way the wind is blowing, it will never get less than 110-170 seats, come what may. It will either be a powerful opposition voice, or a key player in government.