The Budhanoor Tale: How A Village In Kerala’s Chengannur Fought The Floods 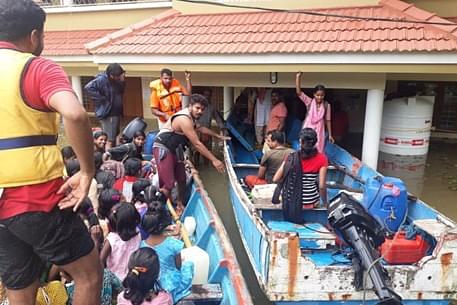 The Indian state of Kerala survived its worst floods after 1924, which left more than 450 people dead. It has been proved that the initial official warning, rescue and mitigation measures were found to be inadequate, and ordinary citizens had to step in and manage rescue operations in their localities.

Such an exemplary show of humanity, amidst humongous devastation and death, by ordinary men and women kept the spirit of survival alive. This is an account from Budhanoor in Chengannur, a small village, which remained isolated from the rest of the world during the floods.

Thousands of people from this village were saved by the timely action of Suresh Bhatathirippad, the priest of the local Bhagavati temple and Kailas, a local swayamsevak of Rashtriya Swayamsevak Sangh (RSS), who promptly reached out to the fishermen from Azheekkal to save the distraught people.

No one in Budhanoor took the rains seriously, till 15 August. People believed that the water would not rise beyond a level and that the rains would subside by the end of the month of Karkidakam. However, on the night of 15 August, things turned for the worse, with River Pamba overflowing the banks with rapid fierceness. The rising floodwaters left the disaster management authorities, and police and revenue officials confused. By the morning, electricity supply got snapped, and the village was completed isolated from the rest of the world.

Only three or four houses in Budhanoor village, belonging to the Adimuttathu Madom, the family of the thantri (chief priest) of the Malayalappuzha Devi temple, were left unaffected by the rising waters.

The Namboothiri family rose to the occasion and threw open the doors of their homes and the family temple to fellow villagers stranded in the flood. Some of the women were reluctant to enter the temple of the goddess fearing they may violate the established rules of piety. When a few expressed their pain in using the temple as a relief camp,

Suresh Bhattathirippad had consoled them with a smile, saying: “Considering that the temples are consecrated with the devta as the protecting guardian of the devotees and the land, we should not hesitate to seek refuge in the home of our goddess. So come in and stay at the temple.”

The daily rituals for the goddess were paused until the water began to recede, and people headed back home. Around 300 people, including women, children and the elderly were housed in the priest’s home and family temple, where they were provided with food and other amenities. The flooded river had inhibited rescue efforts by the army and the National Disaster Response Force (NDRF) personnel, and stopped them from reaching Budhanoor village, earlier.

While the people stranded in their homes were trying to connect with the outside world, seeking help, a young RSS swayamsevak named Kailas made a phone call to the RSS headquarters in Thiruvananthapuram. The pracharak who answered the call asked him to wait for a response in half an hour. He called back within 30 minutes and informed him that the fishermen of Sewa Bharati from the Azhikkal coast are on their way.

Six boats reached Chengannur from Azhikkal, on the morning of 16 August. By the next day, they had rescued around 2,000 people who were marooned in their houses.

Remember, even government rescue teams, including the army, navy, NDRF and coast guard could not reach these remote villages on the first day of the flood. Mainstream media reported about the fishermen who took part in rescue operations in the areas near Chengannur’s M C Road, the arterial highway connecting the principal towns of the region. The fishermen coordinated their operations under the leadership of Brijith, RSS Mandal karyavahak. All worked, in tandem, upon his instructions. However, the media didn’t cover the role of RSS workers either out of ignorance or choice - one would never know!

Even before the world came to know about these people isolated by the floods, they were rescued and shifted to safe locations by these sons of mother ocean.

Boats are the only means of livelihood of fishermen. They rushed in with their vessels to help and save people without fearing a loss of livelihood. The much-maligned (by the leftists) members of the Brahmin Varna opened the doors of the most sacred of places to the needy. If this is not a classic example of the empathy, compassion and cooperation, the Hindu community is capable of, what is?