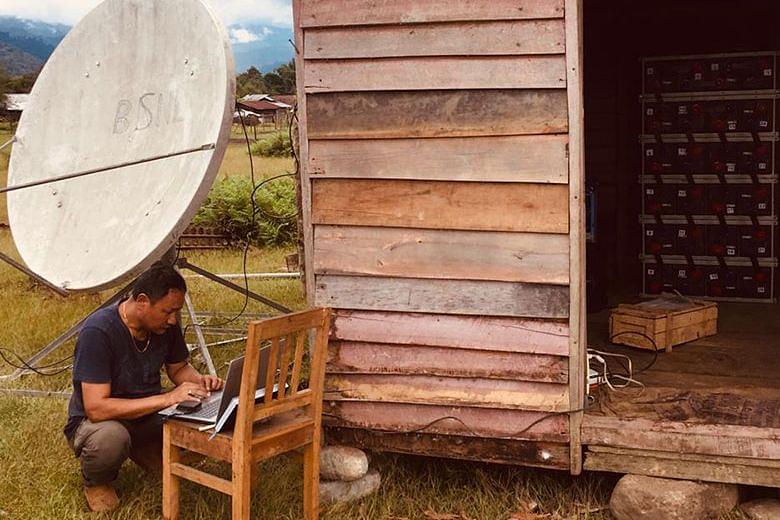 BSNL engineer Karma Tshering outside the log hut at Vijoynagar that houses the sophisticated equipment. (newsfileonline)

For Vijoynagar, e-connectivity has preceded physical connectivity with the rest of the country. That in itself is a unique phenomenon.

India’s easternmost habitation — a cluster of 16 villages collectively known as ‘Vijoynagar’ — in Arunachal Pradesh has finally found a place in the country’s digital map.

When Vijoynagar got its 2G network earlier this week, the 5,000-odd villagers erupted in celebrations. For the youngsters, especially, it was a momentous occasion since they got to use many features of their smartphones for the first time.

But more than all that, it is the account of how the country’s ‘far east’ got Internet connectivity that is fascinating and nothing short of a thrilling adventure story.

No Road To Vijoynagar

Vijoynagar in Arunachal Pradesh’s Changlang district is surrounded by Myanmar on three sides while its western flank is covered by the thick forests of the Namdapha National Park (see this map).

There are no roads leading to Vijoynagar. The nearest roadhead is at Miao, the headquarters of an administrative subdivision by the same name, which is 160 kilometres away. To reach Vijoynagar, one has to trek for about a week through the forests of the national park.

The other alternative is to hitch a ride on army’s helicopters and cargo planes like the AN-32. But ‘air connectivity’ is restricted due to the vagaries of weather.

The long monsoon season and the frequent inclement weather that is quite common in the mountains throughout the year preclude landing of aircraft at Vijoynagar’s advanced landing ground (ALG).

The ALG is a narrow airstrip that was upgraded in September last year to allow operations of fighter and cargo aircraft from it.

Thus, the residents of Vijoynagar depend on ‘mule trains’— mules carrying goods — from Miao for even their basic needs. This, naturally, pushes up prices of all goods: sugar costs Rs 200 a kilo and salt Rs 150 a kilo in this easternmost habitation of India.

Villagers depend a lot on the Assam Rifles, which has a unit stationed at Vijoynagar, for many of their needs and for medicines and medical attention.

The paramilitary force allows locals access to its CSD canteen where goods and foodstuff are available at subsidised rates.

Very often, when aircraft can’t land at Vijoynagar ALG due to bad weather, supplies are para-dropped. But even that is not possible if the skies are completely overcast, as they are for an average of 150 days a year. The only supply then is through the ‘mule trains’.

Given all this, transporting the heavy and sophisticated electronic equipment and construction material required for getting Vijoynagar on the country’s digital map took months of planning and a lot of effort.

The BSNL had to rely completely on the army, the Assam Rifles and the district administration to transport all the equipment and staff. BSNL sub-divisional engineer Karma Tshering, who supervised the installation and testing of the equipment, said that it was a herculean task.

BSNL staff had to be stationed in neighbouring Assam’s Jorhat, where Indian Air Force (IAF) transport aircraft are based, to supervise the loading and transportation of the equipment.

“The equipment had to be packed very carefully and had to be flown out in many sorties. Frequent bad weather led to cancellation of flights or even aircraft returning to base without landing at Vijoynagar,” he said.

Some of the equipment had to be transported on mules and were accompanied by BSNL staff travelling on foot for a week or even more.

Adding to the logistical challenge was the Covid-19 pandemic, which severely restricted the pace of work and movement. The BSNL staff were tested before every trip to Vijoynagar to ensure they did not carry the virus there and infect the locals.

While installing and testing all the equipment at Vijoynagar, the protocol — social distancing, sanitising etc — was strictly followed, said Tshering. The BSNL staff who trekked to Vijoynagar had to take malaria-prevention medicines and other precautions. The trek itself was an arduous one.

It thus took nearly six months for all the equipment to be transported, installed, fine-tuned and tested before the 2G network was officially started earlier this week. And that triggered a lot of celebrations and cheers in Vijoynagar.

“It is a dream come true for us. The service is 2G now, but we’re told it will be upgraded soon,” said Bishu Chetri, a local youth who works as a mason.

How The Place Got Its Name

Chetri is a Gorkha and is a second-generation inhabitant of Vijoynagar, which is located in a vast 800 square kilometre valley that lies in the lap of the northern extent of Patkai Range (an extension of the eastern Himalayan range).

How the Gorkhas, and other non-indigenous people, came to settle in this remotest corner of India is another fascinating story.

The valley was originally inhabited only by the Lisu (or Yobin) people, a Tibeto-Burmese ethnic group who inhabit the Yunnan province of southern China, northern Myanmar, parts of Thailand and eastern Arunachal Pradesh.

The area was ‘discovered’ in May 1961 by an Assam Rifles expedition team named ‘Srijit II’ led by Major Sumer Singh. The team was welcomed by the Lisu people, who were told that the area belongs to India. The border with Myanmar had not been demarcated then.

It is learnt that the Assam Rifles team asked the residents of Dawodi, the village they had gone to, the name of the valley. But since the local Lisu people could not come up with a proper name, Major Singh named the whole area ‘Vijoynagar’ after the son of the then head of the paramilitary force, Major General A S Guraya.

The Assam Rifles then settled about 200 families of their serving jawans and junior commissioned officers (JCOs) in Vijoynagar and offered various incentives, including 50 acres of land to each family, to settle down there. Most of the settlers were Gorkhas, while the rest were a mix of Mizos and the tribes of Assam.

The objective of getting the families of servicemen to settle down there was purely strategic.

“It was done to ensure the permanent presence of people in the valley whose loyalties do not transgress international boundaries,” explained a senior Assam Rifles officer.

What the officer meant was that since the Lisus had close fraternal and ethnic links with the fellow-tribals in Yunnan province (China) and Myanmar, their loyalties in times of adversities could get divided.

It was after the settlement of the families of Assam Rifles personnel in the valley in 1968-1970 that the demarcation of the border with Myanmar in this sector was finally carried out in 1972.

The settlers have integrated well with the Lisus and many, especially of the second generation among them, have married into the local community.

There is more good news for the people of Vijoynagar. A 157.5 km road from Miao that was sanctioned in 2013 but construction of which got derailed due to environmental concerns, is about a year away from completion now.

This Miao-Vijoynagar road, once complete, will make this remote area accessible, ease the lives of the thousands who live in Vijoynagar and usher in many economic benefits. The road will be extended across the Indo-Myanmar border to Putao in Myanmar which is 40 km from Vijoynagar.

For Vijoynagar, e-connectivity has preceded physical connectivity with the rest of the country. That in itself is a unique phenomenon.