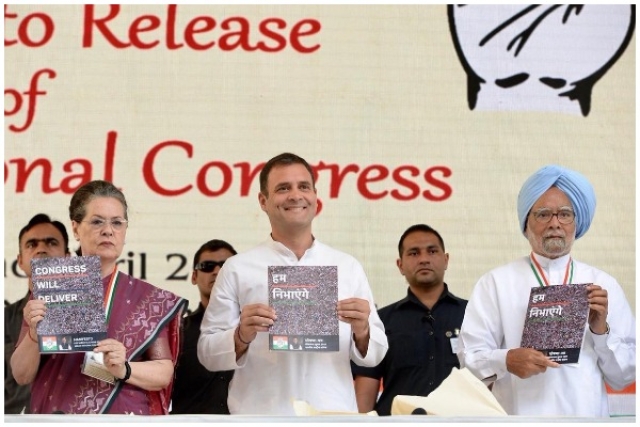 Congress leaders releasing the party’s manifesto ahead of the 2019 General Election.

This unwritten agreement allowed core liberal market principles to take centre stage in framing economic policy irrespective of the party in power. It allowed investment decisions in an environment of diminishing political risk. It enabled the flywheel of economic growth to accelerate.

Importantly, it enabled the creation of a new middle class, lifting hundreds of millions out of poverty faster than at any other time in Indian history.

In 2019, this consensus has ended. Seldom has the schism between the economic policies of the two leading political parties become so vast.

The Bharatiya Janata Party’s (BJP’s) economic and governance reforms are now firmly directed towards expanding the new middle class, a catchall term for the ‘aspirational India’ comprised of the former poor, but who have benefited deeply from India’s gross domestic product (GDP) growth and now, say, drive scooters, buy refrigerators, use ACs etc, and whose children now participate in the new economy.

In stark contrast, Congress’ vision excludes this silent majority, except to speak contemptuously of them for complaining about possible higher tax rates. Indeed, its manifesto all but restores the political sloganeering of Indira Gandhi’s campaigns of ‘garibi-hatao’ through a redistributive approach straight from the 1970s: public spending funded by high taxes and fiscal deficits in order to mobilise the poor for temporary electoral gains.

While the general trajectory of BJP’s economic policies is now firmly oriented towards a liberal market economy, Congress’ socialist approach — as evident from its recently released manifesto — now presents existential risks to the growing Indian economy.

The manifesto is an important document in that it elaborates Congress president Rahul Gandhi’s economic worldview for the first time with such clarity. (Every senior leader from the Congress has admitted that the party hasn’t worked out any details yet, but that what the public should review is the messaging within the manifesto.)

The message is the problem. The Congress has proposed an economic pivot for the nation that involves unprecedentedly large, unfunded, unconditional public spending welfare programmes for the poor of India, a rapidly diminishing section of the population, but one which is easier to cynically mobilise at the polling booths. (This op-ed obviously does not question the self-evident value of addressing the suffering of the poor; merely the means by which that is to be undertaken).

Additionally, the manifesto contains fiats surrounding increasing the ratio of education-spend/GDP and healthcare-spend/GDP; well-intentioned ideas, but whose declarative value is lost when the arithmetic impossibility of such spending is laid bare.

When questioned by the media, Congress leaders first acknowledged insouciantly that higher taxes would be the norm if they come to power, then raced to deny it. As it is, no amount of incremental taxes could pay for the approximately $150 billion of proposed additional annual expenditures. (Total direct collections in financial year 2018 were also, coincidentally, about $150 billion; a 100 per cent tax-rate increase across-the-board would be required to fund their spending.)

Alternatively, the Congress would have to expand the central government’s gross fiscal deficit to beyond 7.5 per cent of GDP. These are levels last seen, coincidentally, in 1991 when the comparable number was 7.61 per cent. India has been to this movie before: A rapidly depreciating rupee, rampant inflation, declining private investment… all of which would be accompanied by a general economic malaise that would upend two decades of hard-earned economic growth.

It would be unwise to believe that the Indian economic revival of the last two decades is sufficiently robust to withstand the assault Gandhi is promising. To those who say this is hyperbole, I say one word: Venezuela. One of the world’s richest countries, laid to waste in less than a decade by similarly misguided policies.

Economic reformation is less of a science and more of a complicated moral philosophy pregnant with human psychology, the study of motivations and incentives, and of choices and consequences. Politicians of all parties should be fearful of disrupting this equilibrium, except to do so with great care.

The Congress’ vision does just that. Violently, and strangely, cavalierly. It speaks of vast spending programmes that require no accountability or work-to-welfare path of its recipients, of an expansionary and intrusive government, of government jobs and of high-taxes… and when all is said and done, it speaks of the private sector in passing, and even then, only to smear it as crooked.

In the end, what Gandhi has promised is the return of a socialist ‘administrative state’, along with its concomitant abuses. It is this approach by Indira Gandhi’s Congress which kept India in darkness until the late 1980s. It is to this where Rahul Gandhi’s Congress will once again take India. (For those who are interested, I encourage them to read my op-ed: “In 2019, PM Modi Must Seek Mandate to Dismantle Congress’ Administrative State”

In a speech to college students last week, BJP’s most formidable strategist made a nuanced argument about the changing nature of Indian demographics, deftly revealing a thought process that will most likely underpin BJP’s future approach to economic planning.

Finance Minister Arun Jaitley mentioned three statistics: That in the next 10-12 odd years, India’s GDP will approach $10 trillion, that the percentage of its population living below the poverty line will fall below 10 per cent, and that India’s middle classes will become more than 50 per cent of its population.

These are astounding statistics for India, and need re-emphasising: within the next decade, India will become an upper middle-income country, and its middle class will be five times as large as its poor.

A lack of focus on these numbers may be the reason for Congress’ apparent cognitive dissonance: their political vocabulary in 2019 resembles that of the Indian politician of the 1970s, while the BJP in 2019 is beginning to speak the language that aspirational Indians are demanding.

Given this trajectory, Congress risks psephological suicide and political irrelevancy were it to continue on the path they’ve laid out for themselves in their manifesto.

The key focus of the incoming administration must be to build on the structural reforms of the last 20 years, and to outline an implementation plan for the next generation of reforms. The next generation of reforms must go deeper and wider, think more ambitiously, and aim to prepare India for its arrival on the world stage as a $10 trillion economy with a population in excess of 1.5 billion.

Also, the next administration must build on the fiscal consolidation at the Centre and state level of the last five years so as to redefine the very role of government in the economy and end the ‘administrative state’ once and for all, the long-enduring curse of India.

The 2019 elections will not merely be a fight between two political groupings. It has now become a clear struggle between two starkly opposing political and economic philosophies. The choice has seldom been clearer.