The Economics Of Protests: How Vandals Can Be Forced To Pay The Price For Mindless Acts 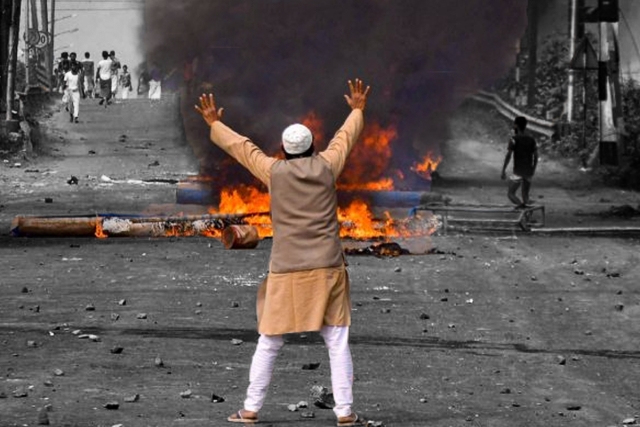 Democracy means dissent and there are multiple ways to show dissent. Being the largest democracy, India has had several experiences of large-scale dissent which have been unique in world history.

Even before Independence when India was experimenting with democracy, Mahatma Gandhi showed dissent towards British colonial powers through the non-cooperation movement and peaceful protest popularly called "Satyagraha".

Bhagat Singh, another young mass leader of that time, exhibited dissent by throwing a non-lethal bomb in the central legislative assembly, not to harm anyone or cause violence, but force the deaf British government to hear the Indians loud and clear.

Just after Independence, Dr Shyama Prasad Mukherjee resigned from the Jawaharlal Nehru government to mark his dissent over the Nehru-Liaquat Pact, 1950.

At the same time, India had witnessed dissent in the form of violent protests on numerous occasions. Right from Chauri-Chaura incident during non-cooperation movement to the present day, violent protests have increased with maturity of Indian democracy.

However, the stark contrast between then and now is the philosophy of Gandhi, who called off the non-cooperation movement across the country just because it started with violence. Thereafter, the violent protest was delegitimised in the Indian psyche; even if it happened for a right cause.

India is once again in the middle of violent protests over the issue of Citizenship Amendment Act (CAA) 2019.

Without diving into the rights and wrongs of protest over this issue, it was disappointing to see public property being vandalised, railway lines damaged, buses and trains burnt, public and private vehicles destroyed, public buildings including schools, colleges, universities defaced, and many such acts leading to loss of property for government as well as general public.

Of late, this has become a kind of an organised crime where dissenters vent their anger by indulging in property destruction. Various governments, central and state, over these years had struggled to maintain law and order during such violent protests and reduce damage to property.

Various governments have failed in their duty to protect property and rights of citizens. Unless and until the reasons for failure are analysed, governments will not be able to stop this kind of dissent, which are causing anxiety to common citizens.

The ordinance, which was replaced by the act passed by Parliament, was similar in nature. It defined public property and stipulated provisions for penal action resulting in rigorous imprisonment of up to 10 years or fine or both.

The law also has strict provisions for granting bail and therefore, tried to deter people from indulging in vandalism. Several states have their own laws to complement this.

However, governments have failed to execute this law properly. As a result, the law is ineffective in curbing the menace of vandalism. In fact, vandalism of public property has been increasing as it is being used to pressurise the government of the day to submit to the protesters’ demand.

Taking suo motu cognisance of various instances of public property destruction, the Supreme Court of India constituted two committees in 2007 to look into the law and suggest suitable changes to make it much more effective.

One such committee was headed by retired judge K T Thomas and another by eminent jurist Fali S Nariman. Both committees submitted their reports to Supreme Court, based on which the apex body framed and issued guidelines in 2009. The highlights of the guidelines were the requirement of protest organisers to sign an undertaking of peaceful protest, police to get the protests videographed or use the videography by private persons, recover damages from the protesters and high courts to take suo motu cognisance of vandalism.

Ten years have passed since this guideline and India is still witnessing a higher degree of vandalism on various issues. Why has the law repeatedly failed despite several attempts by the legislature and judiciary?

Until the reasons for its failure are analysed and addressed, the problem will not be solved. The mounting economic loss has reached such a scale that India will have to pause and ponder over its remedies, if it has to uplift its economy to $5 trillion. On the contrary, the protest in its present form will scare the investors resulting in capital flight leading to contraction of the economy.

The law has failed because of cost of implementing it seems to be high for the ruling dispensation and the benefits for group indulging in vandalism is too high, almost zero cost.

The ruing dispensation fears that it may displease its voter base that may drift away if the law is enforced. Rule of law will make the protesters pay the price either through imprisonment or damages or both. This will annoy the vote bank and can cost the ruling dispensation dear at the time of election.

For example, caste-based reservation stir led the ruling party to lose power in Rajasthan in 2018. For a political party in a democracy, nothing can be costlier than the price paid for retaining power. This is the main reason why no government takes strict action against protesters indulging in vandalism.

From the supply side, costs for protesters are almost negligible. As a group, protesters know that the government will not act against them and therefore, they get emboldened and commit acts of vandalism even at a time when it is not desired. Benefits for protesters are too high as they get electronic and print media coverage, in addition to the limelight the cause attracts. In summary, the protesting group gets all it wants while government remains a mute spectator, as a result of which public suffers at large.

The way out is simple. If the costs for protests are increased so much that it outweighs their benefits, groups will refrain from vandalism. The cost can be increased in many different ways if the liability is shifted completely on to the organisers of the protest, and any damage will guarantee financial recovery from the group or members of the group.

In addition to this, legal banning of the organisers/organisation or individual is another such option. This ban could be in form of withdrawing their right to protest, cancelling voting rights, right to contest election, right to public employment, or withdrawal of government benefits, or combination of any of these.

Once the liability of conducting peaceful protest is shifted on to organisers, it will induce behavioural change in people.

Since the Economic Survey 2019-20 clearly listed the use of behavioural economics in policy implementation; such paradigm shift in legislation should be a top priority for the government.

Recently, the Utter Pradesh government set an example by recovering the damage cost resulting from anti-CAA protests. A clear and transparent communication from its Chief Minister Yogi Adityanath related to financial recovery worked as a deterrent. Swift recovery by state administration provided credibility to this message.

Behaviour economics says that only credible communication has the potential to change the behaviour of economic agents. Game theory and rational expectation theory also use such principle to explain the behaviour of people.

Therefore, a stern message from state chief backed by swift action forced protesters to abandon vandalism and resort to peaceful protest, the only type of legitimate protest in a functioning democracy.

It is high time that the central government enacts a fresh law or amend the existing law based on behavioural economics to address the menace of vandalism. The dead weight loss to society should be prevented at the earliest.