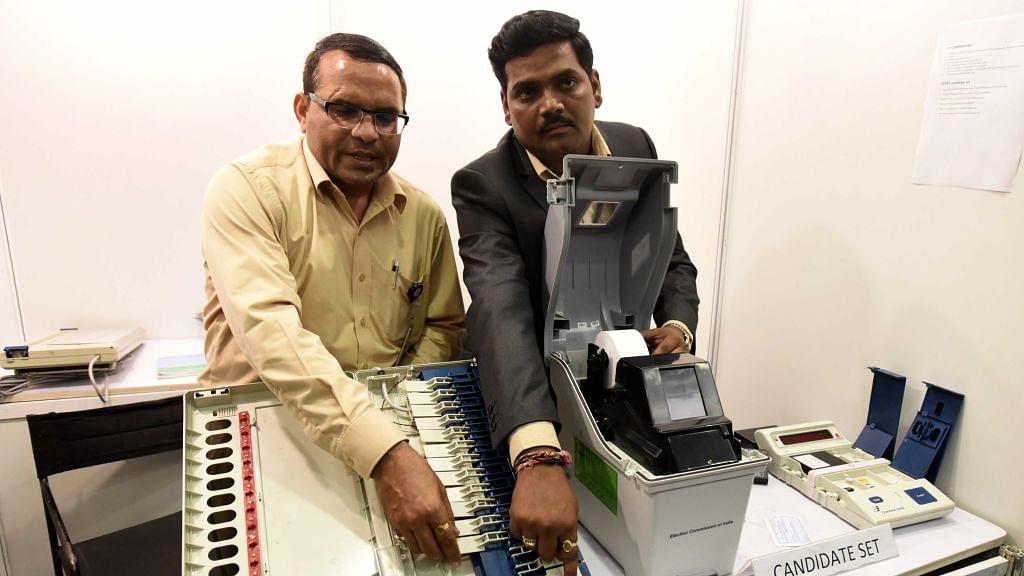 Election Commission of India officers conduct a live demonstration of the workings of the EVM and VVPAT machines ahead of announcing the schedule and process for its EVM challenge, at Vigyan Bhawan on May 20, 2017 in New Delhi (Sonu Mehta/Hindustan Times via Getty Images)

The defining feature of modern democracies has been the reliance on voter mandate. As opposed to the feudalistic practice of passing the throne from father to son, modern polity has accepted the people’s mandate as a central determinant of political power. The Indian Constitution has also reaffirmed the supremacy of democratic transfer of power by entrusting the Election Commission with the mandate of free and fair elections.

Political history of post independent India until the 2000s was however flooded with examples of booth capturing, election frauds, bogus voting and use of money-muscle power for manipulating the results of elections. It was in this context that the Election Commission introduced Electronic Voting Machines (EVMs) as a transparent alternative to paper based ballot voting. Now, neither could a local goon pressure me in to voting for a dominant party nor would I need to comply with the traditional voting behaviours of my family. Thus, conducting free and fair elections became easier and in effect voter mandate became more transparent and democratic.

Meanwhile, the demise of Gandhi family’s stronghold in the political arena and the rise of the Bharatiya Janata Party (BJP) as an alternative have understandably shaken the foundations of India’s grand old party. The traditional practice of passing the baton from one Gandhi to another has been disrupted and people have been voting for a change from dynastic inheritance of power. The opposition, instead of defending its stand on real issues, has conveniently labelled the EVM, the villain. Just as how students, who fail an exam, start blaming the question paper, so is the Congress party justifying its loss by blaming the EVMs. Additionally, other opposition parties who have also lost to the BJP in state elections have joined hands with the Congress to insulate their failures by propagating a false narrative of EVM tampering.

This marks the rise of a dangerous trend in Indian politics where opposition is questioning the very essence of democracy in India. Not being able to digest its successive losses, the Congress has been infecting the public psyche with an anti-democratic argument of imagined tampering of the EVM. A return to family based politics is being given supremacy over the mandate of people. Simply put, if the Gandhi family does not win an election, Congress will claim that EVMs were tampered! This argument is both politically and technically flawed.

In the technical context, EVMs which are currently in use have been manufactured in different years starting from 2006 and beyond. This is when BJP was not in power and the manufacturers could not have practically predicted, which candidate would be contesting elections several years in the following years, leave alone the sequence of candidates in the ballot. Coming to the design, EVMs are stand-alone machines which are doubly secured and send the encrypted data directly from the ballot box to the control unit, negating any chance of manipulation at the ballot units. Moreover, the EVMs are not computer controlled nor do they use any internet connection and so the whole narrative of hacking the EVM software is fundamentally wrong. Hence no tampering is possible either through hardware port or through wireless, wi-fi or bluetooth device.

If EVMs are indeed tampered how do you explain the loss of the BJP in major states like Bihar and Punjab? Logically this means that according to the Congress, EVMs were tampered in elections for Lok Sabha or in states like Uttar Pradesh and Assam where Congress lost and the machines turned fair when the Congress and opposition won in Punjab, Bihar and Delhi!

Thus, this biased attitude of blaming the EVMs when the Congress or other opposition parties lose is not only false but also sets the stage for anti-democratic forces in India. If people are voting against dynastic and caste based politics in favour of development and national security, the voter mandate has to be accepted. EVMs cannot be used as a scapegoat for rejecting the democratic mandate. And this position of the Congress placing the dynastic politics over transparent voting is nothing short of a return to the mediaeval ages of monarchy and family rule.

Conclusively, as opposed to an era of booth capturing and bogus voting, EVMs have stood the test of time in facilitating transparent transfer of power from one party to another. Today it is the BJP, tomorrow it could be Congress, after which it could be some other party ruling at the Centre. Hence, political parties will come and go but we will have to take a principled stand to respect the democratic mandate of India’s people. This is especially true now when the Congress and other opposition parties have been trying to pass around a false narrative of EVM tampering based on whether or not they win an election. And we as citizens of the largest democracy have to resist any attempt to usurp the right of the common man to fair vote through the transparency offered by the EVMs.