The Gandhis Are Over: Glue That Held Congress Together Has Come Unstuck 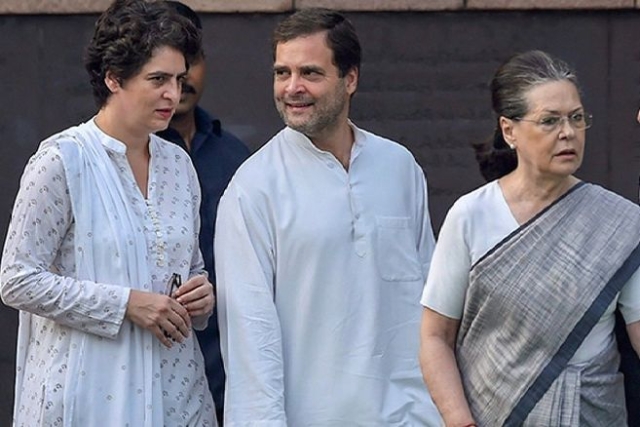 The arrival of Priyanka Vadra to wipe the tears of the victims of Sonbhadra’s tribal killings will, once again, reinforce the idea that the Congress party needs a Gandhi family leader at the helm to rejuvenate itself. Ten Gond tribals were shot dead last week over a land dispute in Sonbhadra's Ghorawal area, and Priyanka rushed to take political advantage even as brother Rahul Gandhi was missing in action, and the Uttar Pradesh government seemed slow to redress the grievances.

Ever since the Congress party under Rahul Gandhi’s leadership got a sound thrashing in the 2019 general elections, and the man himself abandoned his post, most commentators have been asking how the party will reinvent itself without the family. The party has been in disintegration mode, with legislators in Goa and even Karnataka moving to Bharatiya Janata Party’s (BJP’s) side. In Rahul Gandhi’s absence, sister Priyanka has moved in to fill the vacuum.

Does the Congress really need the Gandhi family? The idea that even if the Gandhis are no longer big vote-winners in any state, they are still needed to hold the party together is widely accepted. A few days ago, columnist Swaminathan Anklesaria Aiyar, emphasised the same point, claiming that “all past attempts to create a Congress minus the Gandhis have failed.”

There is some truth to this at the national level, but look at the state level, and the reality is the exact opposite. N T Rama Rao left the Congress, and created the Telugu Desam. Jagan Reddy got turfed out, and today he is the Chief Minister of Andhra Pradesh. K Chandrashekar Rao, now Chief Minister of Telangana, too started out as a Congressman, but later joined Telugu Desam before finally opting to create his own identity in the Telangana Rashtra Samiti.

Even in states where the Congress party remains a contender for power – Punjab, Karnataka, Himachal Pradesh, Haryana, Rajasthan, Madhya Pradesh, Gujarat, Chhattisgarh, Assam and Kerala – it is the regional satraps who bring in the vote, not the Gandhis. Amarinder Singh would have won Punjab even without the Gandhis, and Siddaramaiah is the politician to reckon with in Karnataka, not Rahul Gandhi.

The Gandhi glue did not endear Navjot Singh Sidhu to Amarinder Singh, nor did the glue help Siddaramaiah retain Karnataka in the last assembly elections in 2018. The Gandhi glue, in fact, failed to cement a workable coalition with H D Kumaraswamy, leaving Siddaramaiah chafing at the bit. In opposition, he would have been a bigger threat to the BJP than in a marriage of convenience with the Janata Dal (S), where the bigger party plays junior partner.

The real glues that hold politicians together in any party are the following.

One, ideology. No matter how the BJP fares, whether it wins or loses, ideology holds its members together in the long term. The same is true for the Left, and even the caste-based parties.

Two, power. Power is a better glue to holding disparate party elements together than a family past its sell-by date. This is true not only of the Gandhis, but also the Yadavs in Uttar Pradesh and Bihar. Ultimately, if Akhilesh Yadav or Tejashwi Yadav become dominant in Uttar Pradesh and Bihar, it will be because they are more able politicians, and not because they are related to Mulayam Singh and Lalu Prasad.

Three, charisma. Party members will stick by a family if it is a real vote-winner, and not only because they are family. Right now, dispirited members of the Congress are hoping that Priyanka Vadra will be a vote-winner for them, but this is far from proven. If she could not even ensure a win for her brother in Amethi, or for the party in eastern Uttar Pradesh, where she was put in charge, it is a stretch to believe that she can deliver where her brother did not.

The Congress party does not need any glue to hold it together. It needs victories. Unfortunately, the Gandhi family is unable to deliver that. The family is the crutch the party does not need, but the latter has been used to using the crutch for so long, that sheer inertia prevents it from realising this truth and throwing it away.