The 'Grey Lady' And Pegasus Deceit: Why Latest 'Discoveries' In The Story Are More Hype Than Substance, Again 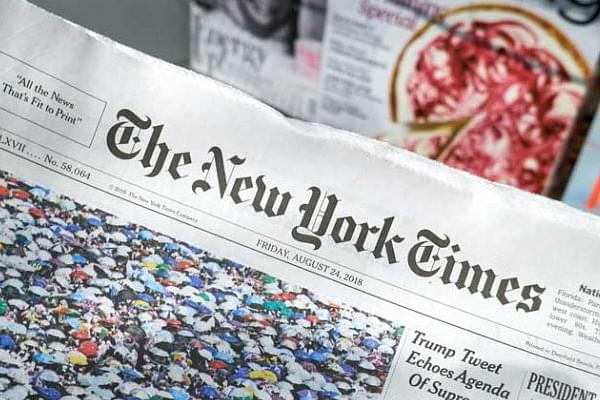 Publication houses, journalists and supposed investigators are often so off the mark that they refuse to recognise the truth.

Post-truth, pre-truth, anything but the truth — this facile attitude adopted by a handful is not damaging the ones it is supposed to target. Rather, it is eroding the confidence and trust that people would pose in them, and their abilities.

L’affaire Pegasus is playing out on the same lines. Every few months, some ‘sensational’ discovery turns up that reveals ‘a grave threat’ to the ‘foundations of democracy’ and ‘free speech’, and ‘treasonous behaviour’ that damages the reputation of the government.

The latest in this series is an interview done by The Wire that seeks to raise suspicion.

Yet, the mountain made out of a non-existent molehill continues to remain invisible to most people even as the liberal Bible known as New York Times has stood up once again to raise the issue, with everyone chasing it.

What New York Times Really Does

Let us look at what has been quoted by The Wire.

At the very outset, I feel conned. Conned, because a New York Times story writer (and I mean it literally) is considered credible. We all know how the Times has gotten away with fictional stories in the past without being forced to pay for its consequences.

Remember the run-up to America’s second invasion of Iraq in 2002? As a fake story of mysterious aluminium pipes was floated by vested interest groups, the New York Times could not identify the propaganda being peddled.

Instead, it gave a carte blanche to the vested interests and decided to go ahead and publish the fraudulent story nearly verbatim.

All that eventually was discovered in Iraq were mounds of dead bodies created by endless fighting that was triggered, thanks to the public support generated by such fiction.

If this seems somewhat vintage, let us get into the recent Russia collusion theory that was used to label America’s then boorish President Donald Trump a traitor, a Russia agent, and a Manchurian candidate.

They even got a Pulitzer for their 'investigative work'.

Except for a minor detail.

The Mueller investigation as well as the Senate Intelligence — results of the public outcry — affirmed that there was no evidence that President Trump or his staff conspired with the Russian government to impact the 2016 election.

If that was not bad enough, the American Department of Justice charged Igor Danchenko of lying to the FBI.

Who is this Danchenko, one may ask?

Danchenko had worked with ex-British spy Christopher Steele on the now infamous Steele dossier, which was published by Buzzfeed 10 days before Trump took office. The Steele Dossier made a number of explosive claims linking Trump to the Kremlin — including that Russia had material on the Republican candidate, implying he was their ‘Manchurian candidate’.

A recent book called The Grey Lady Winked has been silently becoming a bestseller. It raises questions on the inconsistencies, fallacies and lies published by New York Times over the years.

The Grey Lady, the New York Times in this case , could, perhaps, do well to ponder why it is being hauled through the coals so much more in recent times.

Question Marks On The Inconsistencies

In the interview’s excerpts that have been put out, Bergman has been quoted as saying that the Indians signed a contract worth “dozens of millions”, which formed only a small part of the $2billion arms deal inked with Israel in April 2017.

This is problematic, because dozens of millions is a rather vague way of putting it. Unlike a $61 million contract of Mexico or UAE, where the contract ‘was in the range of $10 million to $15 million’, all we hear is ‘dozens of millions’.

That reads like a very sloppy investigation and reads more like hearsay. This becomes even weirder when it is mentioned that the Indian contract envisages concurrent attacks on up to 50 phones.

Surely, the cost should have been known.

Another reason to reasonably doubt Bergman's statements is his claim that India entered into a government-to-government deal with Israel to acquire Pegasus, and the deal was on behalf of the company that owns the spyware.

'Deals between countries', as is being claimed on the issue of Pegasus between Israel and India, sounds bizarre for a simple reason. As per Bergman, ‘in order for an intelligence agency to buy and then install Pegasus and have an online activation of the system, it needs to be handled by the top authorities in Israel.’

This implies quite a few things:

Then again, there is the problem of 50 contracts in itself. The Wire reported last year that 174 individuals’ phones were supposed to have faced attacks, successfully and unsuccessfully.

Even assuming that it was done in groups, it makes no sense to have four rounds of attacks. Who did these attacks? Who coordinated these attacks? When did they occur? The chronology of attacks is never specified clearly by The Wire or the New York Times at least when it comes to India.

Even the supposed forensic tests report of Free Labs seems somewhat unreliable. When not able to detect the presence or intrusion, the report states that it ‘suspects’ the intrusion happened.

Suspicion is just that — suspicion. There could be other spywares similar to Pegasus. How was Amnesty so sure to suspect an intrusion using Pegasus?

There is just too much hype and very little substance in such tall claims as are being peddled by The Wire and the Grey Lady on the Pegasus issue. Much of it reads like clever deceit, so one wonders what is sought to be achieved by the people who follow each other blindly.

To many like us, we get reminded of this famous caustic Hindi poem that the liberals of India keep quoting, aloof to the fact that it reflects pretty much the situation on Pegasus:

In short, everyone follows what the king, in this case the Grey Lady, says, without using their sensibilities. Unless of course there is malice.