The Hagia Sophia Court Judgment — What Lies Beneath? 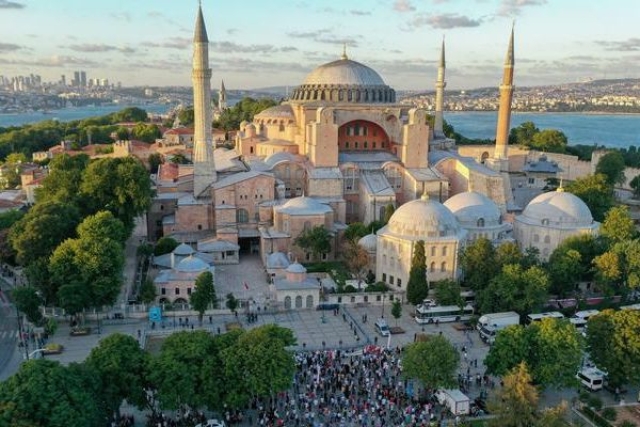 The Hagia Sophia in Istanbul, Turkey, one of the most admired buildings in the world, is in the news because of a recent Turkish Supreme Court ruling, which changes its status from museum to mosque.

This attracted condemnations from multiple Christian outfits of varied denominations, and governments, because the building was originally built as a small church in the 4th Century CE.

The present imposing structure was built later in the mid-6th century CE, by order of the Byzantine emperor, Justinian the First. It only became a mosque after Constantinople, as Istanbul was then known, and the Byzantine Empire, fell to Ottoman king Mehmet, the Conqueror, in 1453 CE.

It then became a museum by cabinet fiat in 1935, under Kemel Ataturk, the founder of modern Turkey.

It is this 85-year-old cabinet decision which has now been overruled by the Turkish Supreme Court.

This in turn has caused anguished op-ed writers and commentators to invoke strong imagery of the Holy Crusades, and impart a sinister, confrontational, Christian-versus-Muslim spin to the recent judgment (The Crusades were a series of military campaigns conducted between the 11th and 15th centuries CE, by Christian kings from Europe, with the blessings of the Church, to reclaim their Holy Lands and traditional pilgrimage centers from the Muslims).

But there is a lot more to this judgment than meets the eye, with strong underpinnings which go far beyond a simplistic account, of how the building’s status changed so many times: from church to mosque in 1453, to church again briefly in 1919, to not a church, but not quite a mosque, for a few years, to museum in 1935, and to mosque again in 2020.

First of all, the spot has a chequered past predating Islam. The original church was burnt down shortly after it was built; a replacement met the same fate some years later, when it was burnt by arsonists during the Nika race riots of 532 CE.

Second, even as a church, the building underwent multiple changes of hands long before the Ottoman Empire was a gleam in its founder, Osman’s, eye.

What was built as a symbol of Byzantine liberation, from Roman yoke, was comprehensively defaced in the 8th century by iconoclast Christian puritans.

A century later, the winds changed, and a new order restored the statues. Then, early in the 13th century, a Roman, Latin faction wrested control of the church, only to lose it back to the Eastern Orthodox Church half a century later.

It is only after the Ottomans triumphed in 1453 CE, that it became the lodestone of the Ottoman Caliphate, and the socio-political centre of the Islamic world. Generations of Mughal emperors had the kuthbah recited in Indian mosques on Fridays, in the name of a Caliph who lived in the vicinity of this magnificent structure, in Istanbul.

So we see that the Hagia Sophia has always been a powerful symbol of identity for various strands of different faiths.

But with the defeat and disintegration of the Ottoman Empire, after the First World War, Kemel Ataturk, the new leader of Turkey, decided that the only way forward was a break with the past.

For Ataturk, like other Asian leaders of his age, Marx came before Mohammed, which meant that the Caliphate, and its symbols, had to go.

Islam made way for secularism, a visceral, theological chain, which had bound the clergy and the state since the 7th century was broken, the post of Caliph ceased to exist, and a modern, nation-state was founded on an ethnic, Turkish identity, sans faith; the Hagia Sophia lost its religious function, and became a museum.

And so it remained until the late 1980s, and the end of the Cold War, until a new need for a pan-Islamic identity resurfaced with the first Gulf War, and a pile of Wahhabi petro-dollars as high as the minarets of the Hagia Sophia.

But the astute saw it coming from well before.

They knew that the Caliphate was an integral part of Islam, laid down as a core necessity, right from the time of those who had the privilege of serving alongside the Prophet Mohammed.

The mullah and the sultan were but two sides of one coin. Now, a separation of church and state might have been a prerequisite for liberal, secular, open democracies based on universal adult suffrage, but it wasn’t to Islam.

Unfortunately, the bulk of the twentieth century suppressed that belief, because most of the leaders of Islamic nations then, were products of a colonial, Occidental system, with unalloyed liberal, rationalist, socialist views, in the best traditions of Burke, Kant, and 18th century European enlightenment (via, of course, Hegel, Darwin, Marx, Bentham, Nietzsche, Mill and countless other dead white men).

The rulers of Iran preferred petroleum to the pulpit. Ataturk wanted factories, not mosques.

The Ba’athists of Iraq made Baghdad more glamorous than Biarritz.

Naranj Restaurant in Ba’athist Damascus, across the border, outdid the best Michelin-starred kitchens Europe had to offer.

Iskander Mirza and Yahya Khan of Pakistan were more ‘English’ than the English. Beirut was more Parisian than Paris. Even Palestinian leader Yasser Arafat was more liberal than puritan.

Sadly, they never understood that you can deny a man his past, but you can’t deny him his salvation.

If that sounds depressingly familiar, look at it in Indian terms:

Upon Independence, Nehru said that the factories of his Soviet-styled ‘Five Year Plans’ would be the new temples of modern India. Faith was replaced with an anodyne, secular credo, which would homogenise and integrate.

That is why the Babri Mosque at Ayodhya was, for him, an issue best kept locked away in the gloomy dungeons of slow justice.

It was neither temple nor mosque, but a needless dispute, reflecting irrational urges of another time, and antediluvian stirrings which had no place in his idea of a modern, progressive, liberal, secular India.

The janmabhoomi was his Hagia Sophia, and Nehru’s decision of 1949, to seal the gates to the birth site, was Ataturk’s cabinet decision to turn a mosque into a museum.

The pity is that there actually was no dispute: exactly as Hindus believed by tradition, that Shri Rama was born at a sacred spot in Ayodhya, and, as excavations later proved, that a grand temple had been demolished by Muslim invaders to build a mosque there instead, Turkish Muslims held that the Hagia Sophia was a church which was legally converted after conquest into a mosque, as per valid tenets and traditions of the Islamic faith.

This is no different from Christian nations, who actively support the Jewish state of Israel, in part, so that sacred Biblical sites like Jerusalem, Bethlehem or Nazareth, do not fall into Muslim hands.

And there wouldn’t have been a dispute either, if only a set of Marxist historians, acting at the behest of secular, liberal forces, hadn’t sold the Ashrafi Muslim leadership of the Gangetic Plains, of that time, the lollipop that they had a good case.

As late as 1990, a section of the Muslim leadership was inclined to accept a compromise out of court. So much acrimony and bloodshed could have been avoided. But, Liberalism prevailed, the Sunni Waqf Board was inveigled into pursuing a legal solution, and the rest, as they say, is history.

Yet, for all the communal riots which have taken place since then, and the social divides which fester, more and more Indians now realise that the crux of the problem wasn’t in Muslim alienation, or sentiments of minority victimhood, but with the purveyors of imported ideologies who dug that divide.

Their problem, then, is not with Indian Muslims per se, but with those Liberals who goad them; and that is the true worth of the recent, massive mandates in favour of the BJP.

The Turks took a few decades longer to get to their post-colonial, civilisational paradigm point, because theirs is not a genuine democracy (even if they hold periodic elections).

An intensely-Westernised, officially-secular military retains much say in state matters, amidst now-fraying links to NATO, a bumpy association with the European Union, and Russian efforts to reestablish their traditional primacy in the Eastern Mediterranean, and Asia Minor.

But the trends are the same. Turkey too, is rejecting structural, attitudinal, and social impositions of an Occidental, colonial pedigree.

That age-old debate, of whether Turks are European or Asian, is being asked by a new generation, who seek such answers of identity in both God and country, without ideological contradiction.

Now, while few would welcome a Turkish variant of the Islamic Brotherhood in Ankara, a creeping rejection of strictured secularism is the undeniable, current reality – people are moving away from a synthetic society, built using alien ideas from alien lands.

They want their own ways back, whether anyone else likes it or not.

So, we see that just as a Nehruvian Era is being brought to a close in India, an Ataturk-ian Age, too, is on the ebb in Turkey.

Now, in conclusion, there is no doubt that much of the hubbub in Turkey is artificially engineered.

Domestic compulsions and political dynamics are the same everywhere. President Recep Erdogan plays the religion card frequently, to consolidate his support base. On occasion, he has sought to juggle dangerously unachievable, but enticing visions of Pan-Islamism, with a muscular racial memory of an Ottoman Caliphate redux, to try and create a leadership role for Turkey in the Middle East.

That has earned him the title of an Islamist, and an expansionist, who would set his secular Turkey on a collision course with the Christian West.

Also, the timing of this Supreme Court judgment coincides with a global power struggle, marked by intense Russian efforts to clip American influence in the Middle East, and geopolitics over the piped supply of gas to Europe worth hundreds of billions of dollars.

Both centre on Turkey being weaned out of NATO. The implications extend to India as well.

Still, while most of the accusations hurled at Erdogan may hold water, and even if he might be playing a dangerous game for high stakes (which might backfire), his decision to make the Hagia Sophia a functioning mosque again need not be read, solely, as one more instance of the increasing Islamisation of Turkey.

Similarly, while it is no doubt galling for Christians, to swallow the abrogation of a century-old status quo, this move should not be used to blindly fuel further Islamophobia.

The reason is that as much as the Hagia Sophia decision may be political, it also represents people making a choice, and finally shrugging off identities fashioned by an imported ‘Idea of Turkey’.

Ergo, a Turkish decision to make the Hagia Sophia a mosque again, may be inferred less as an alarming, fanatical, Islamist indicator of which way Turkey is headed, or, as a metaphoric expression of rising socio-political hostility to relentless, Western, Christian interference in the region, but rather more, as an aggressive rejection of that Liberalism, which was imposed on Turkey by Turks long ago.

Bottom line: this move is anti-secular, not anti-Christian.