The Many ‘Returns’ Of Kalyan Singh 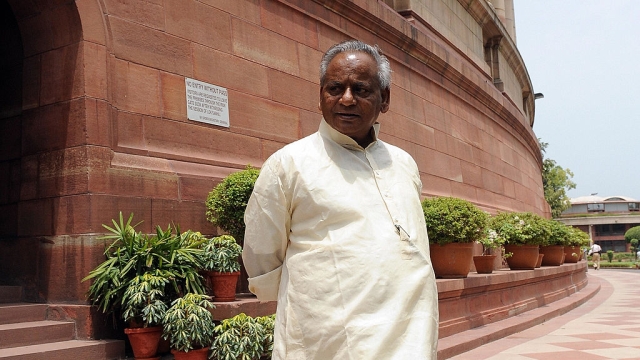 When the Bharatiya Janata Party high command decided to make party veteran Kalyan Singh the governor of Rajasthan in September 2014, it was interpreted as an end of his active political career.

No Indian politician retires from politics, and Kalyan Singh is no different. So what if he is 84?

Before taking up his gubernatorial assignment he had ensured that his son Rajveer, an MP from Etah, was made a vice-president in the party’s state executive.

Kalyan Singh had to be kept in good humour, after all. Having dominated the state political scene for decades, he is not one who can be easily written off. All the talk of him being brought back to head the BJP’s 2017 poll campaign in Uttar Pradesh supports the argument.This, as the BJP desperately looks for a leader of stature to head its poll campaign.

It now appears as if the BJP can’t do without the active services of the former rebel, who not only once joined hands with the Samajwadi Party but also parted ways with the BJP to form his own outfit --- the Rashtriya Kranti Party---in 1999 to launch his son into politics. He appointed Rajveer, the key factor in his disenchantment with the BJP, its president.

His decisions --- to campaign for the SP in the 2009 elections and form the RKP--- became a cause célèbre nationally as Kalyan Singh was no ordinary leader and was taking on stalwarts like Atal Bihari Vajpayee and LK Advani.

In 2010 he again created a stir by leaving the party complaining of “neglect and humiliation” and formed a political outfit named the Jan Kranti Party.

The previous year, 2009, he and Mulayam Singh Yadav had made for strange bedfellows in the state’s politics--- Kalyan an RSS man, a Hindu leader who was instrumental in the demolition of Babri mosque at Ayodhya, and Mulayam a defender of Muslims, their interests, and responsible for the “massacre of kar sevaks” in 1990.

It will, therefore, be ironical to see the octogenarian leader being made the party’s face in the election campaign targeting mainly the SP, for which he had campaigned with vigour and sincerity in 2009. What shocked the BJP voters then was that Kalyan Singh had agreed to sup with the enemy who had ordered firing on kar sevaks and led to the weakening of the party in UP.

Yet, his first tenure as chief minister of Uttar Pradesh from June 1991 to December 1992 was remarkable. He is still remembered for his charisma, administrative acumen and integrity.

In his second term from 1997-1999 much of his administrative qualities were compromised due to avoidable personal reasons. Although his government survived, withdrawal of support by Mayawati in 1997 weakened him politically. So did the ego tussle between him Rajnath Singh, Kalraj Mishra and Lalji Tandon, each of them thinking he was bigger than the other three.
As his differences with the party high command became irrevocable, Kalyan Singh decided to quit the party to chart a new course. He eventually resigned when was replaced by Ram Prakash Gupta as CM in 1999. He decided to return to his parent party though in 2004.

Coming back yet again to state politics?

On a visit to Lucknow in April 2016, Kalyan Singh had hinted that he could make a return to politics in the state. “I was asked to go to Jaipur as governor and I obeyed it. Now any new role would also be accepted in the same spirit,” he had told the media.

Names of several other leaders had in the meantime surfaced and faded away, barring that of Rajnath Singh. Smriti Irani, Varun Gandhi, Mahant Adityanath, Mahesh Sharma have all been discussed as possible candidates to fill the leadership vacuum at the top level but none appeared to be a serious contender. With Rajnath Singh reluctant to move out of Delhi and Kalraj Mishra and Lalji Tandon no longer the power centres they once were, the old war horse could well be back in the reckoning.

That Kalyan still retained his image of a political strongman was proved when the BJP state president KP Maurya retained Rajveer as state vice-president in the recently reconstituted state executive committee. It was part of a package deal struck between the rebel leader and the BJP leadership in 2014.

But why Kalyan Singh, who has been a rebel, having left the party twice, and who treats Mulayam as his frenemy? What is it about the Lodh leader that the party has to fall back on him even though his return did not help the BJP in previous elections?

One explanation could be that the BJP wants to consolidate its hold on the OBC votes and Kalyan is regarded as the tallest of Lodh leaders in the state. It already has Apna Dal’s Anupriya Patel on its side for Kurmi votes, KP Maurya is there as the party’s state unit chief. Kalyan would only add to its arsenal for targeting the OBCs.

The only dampener is Kalyan’s eroding voter base. Despite his return in 2004, the BJP could win only 10 of the 80 parliamentary seats. It had won 29 seats in 1999. In the 2002 assembly elections, the RKP managed to win only four seats, but the BJP’s tally came down from 174 in 1996 to 80. It was said that his influence had cost the BJP dear in about 40 seats where Lodh votes mattered the most.

The BJP again projected him as the chief ministerial candidate in 2007 assembly elections but fared miserably. The party’s strength in the assembly fell further from 80 to 51.

Further in the 2012, Kalyan Singh’s JKP could not win even a single seat and his son and daughter-in-law both lost the elections.
Will the Kalyan magic work this time? He himself may think so while the BJP hopes it will, if used in tandem with the other backward caste leaders. The more important question is that after his flirtations with Mulayam, would he still be regarded as a strong votary of Hindutva?