The Missing 56: 1971 War’s Indian POWs In Pakistan Who Never Returned 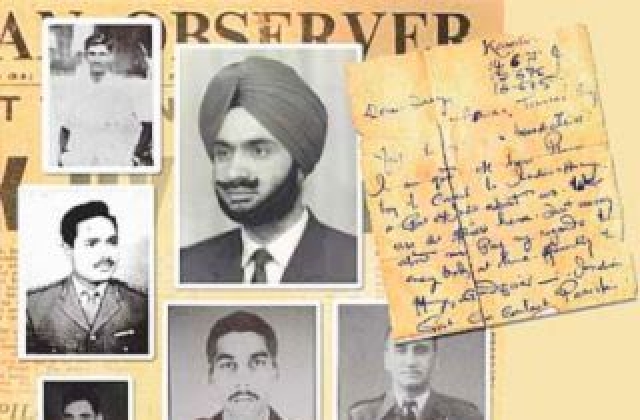 Photos of some of the missing POWs and the letter written by Maj Ashok Suri. (Source: Facebook @TheMissing54Indians)

A few days back, the world heard Imran Khan, the Prime Minister of Pakistan, screaming vengeance for the imprisonment of the Kashmiri separatists.

He hopped from country to country talking in favour of the jailed Kashmiri Muslim separatists, who actually had, for several years, worked against the common man in Jammu & Kashmir, while filling their own pockets.

These people have never shown an iota of faith in the Indian Constitution despite having lived, earned and eaten in the country. But they had the PM of Pakistan shedding tears for them. Such irony!

The same Pakistan never felt even once that they should release the 56 India prisoners of war (POWs), especially after the fact that New Delhi sent back 93,000 Pakistani POWs.

We are talking about the 1971 Indo-Pakistan war when the Pakistani forces in East Pakistan agreed to a complete and unconditional surrender. The war ended and as per the terms of the treaty of surrender, 93,000 Pakistani POWs were released by the Indira Gandhi-led Congress government of the day.

But for the families of the Indian POWs, it was the beginning of a never-ending wait. The Indian government, it seemed, had forgot all about asking Pakistan to send back the Indian soldiers it had in custody.

It is tragic that the families of these POWs have not found closure.

And this apathy towards POWs does not seem to have ended under the current government too. To its credit, the Narendra Modi government was very prompt in getting Abhinandan back and has also fought bravely for Kulbhushan Jadhav.

But unfortunately, this government too has been incapable of ending the heartbreaking wait of 45 years for the families of those POWs.

One only has to remember Captain Saurabh Kalia to imagine what these POWs must have gone through over the years.

Captain Saurabh Kalia and five other soldiers were the first ones to confirm the intrusion by the Pakistani Army in Kargil. After continuous cross-fire with the Pakistani armed forces from across the LOC, he and his troops ran out of ammunition.

They were finally encircled by a platoon of Pakistanis and captured alive before Indian reinforcements could reach them.

Indian officials claim that Lt Saurabh Kalia and his men were in captivity from 15 May 1999–7 June 1999 (over twenty-two days), and were subjected to inhuman torture as evident from injuries to their bodies when they were handed over by the Pakistani Army on 9 June 1999.

Post-mortem examinations conducted by India revealed that the Pakistanis had tortured them by burning their bodies with cigarettes, piercing the ear-drums with hot rods, puncturing their eyes before removing them, breaking most of their teeth and bones, fracturing their skulls, and finally shooting them dead, as evidenced by bullet wounds . The post-mortem also confirmed the injuries were inflicted ante-mortem (before death).

Now imagine yourself as the parent, child or wife of one of the POWs of 1971. Wouldn’t you want that the government tries to at least find out about the status of these POWs? We do not have any information as to whether they are dead or alive.

Equally cruel is the fact that the Pakistan government, which sheds copious tears for Jihadi terrorists, is never co-operative on this issue.

No amount of goodwill gestures — like that of our Brigadier M P S Bajwa, who wrote a citation for late Captain Karnal Sher Khan and put it in his pocket, because of which Captain Khan was awarded the Nishan-e-Haider by Pakistan — moves our neighbouring country.

This happened during the same Kargil War that showed the thoroughly inhuman face of Pakistan with respect to Captain Kalia and his team. Perhaps the Pakistan Army has never received training in being gallant!

All our expertise in diplomacy stops at the doorsteps of the Pakistani government when it comes to our soldiers who were never released. Why? They had only done their duty as any proud Indian soldier would.

Since a foreign country is involved, these issues can only be taken up by the Ministry of External Affairs and the PMO. Is it not natural to expect our government to move the wheels of International Justice forums and fight for our POWs’ Right to Life?

Many wonder whether there is any proof that 56 POWs were languishing in Pakistani jails. Some of the evidence is presented below (as sent by a war veteran).

Most of the dates are pre-1980. What we know now is that many have turned insane with the torture inflicted upon them or have died of serious illnesses or under mysterious circumstances.

1. Major Ashok Suri. On 26 December 1974, R S Suri received an envelope, dated 7 December 1974, from his son. The envelope contained a hand-written note in which his son had written, "I am okay here.”

A covering letter in the envelope read: "Sahib, valaikumsalam, I cannot meet you in person. Your son is alive and he is in Pakistan. I could only bring this slip, which I am sending you. Now going back to Pak." It was signed by one M Abdul Hamid.

Dear Daddy, Ashok touches thy feet to get your benediction. I am quite ok here. Please try to contact the Indian Army or Government of India about us. We are 20 officers here. Don’t worry about me. Pay my regards to everybody at home, specially to mummy, grandfather. Indian Government can contact Pakistan Government for our freedom.

The then Defence Secretary had the handwriting confirmed as Ashok’s and changed the official statement from "killed in action" to "missing in action"!

2. Major A K Ghosh. Major Ghosh’s photograph was published in an article in Time Magazine dated 27 December 1971. The photograph is proof that Maj A K Ghosh was in Pakistani custody when the war ended on 17 December 1971. He did not return with the POWs in 1972 at the time of the Simla agreement.

3. Wing Commander Gill, Captain Singh and 40 other POWs. Mohanlal Bhaskar who was in a Pakistani jail between 1968 and 1974 and was repatriated on 9 December 1974, wrote a book in Hindi titled, “Main Bharat ka jasoos tha”.

In a signed affidavit, he stated that he had met a Col Asif Shafi of Second Punjab Regiment of Pakistan and a Maj Ayaaz Ahmed Sipra at Attock Fort.

Maj Ayaaz Ahmed Sipra spoke of his befriending a Wing Commander Gill of the Indian Air Force and a Captain Singh of the Indian Army as well as mentioning that there were around 40 POWs of the 1965 and 1971 wars in that jail who had no chance of being released.

Maj Ayaaz Ahmed and Col Shafi later apparently moved to the US where Col Shafi was again traced by Manish Jain — son-in-law of Sqn Ldr Jain, another Indian missing officer and believed to be in Pakistani jail since the 1971 war — and Shafi had confirmed to Jain unofficially in a telephonic conversation that he had met Wg Cdr Gill in Attock in 2000.

4. Major Waraich. A Pakistani general, General Riaz, Governor of NWFP (North-West Frontier Province), who subsequently died in an accident, informed Ashwini Kumar, the then IG of the Indian Border Security Force (BSF), as a personal favour to him at the Munich Olympics in 1972 that one Major Waraich was being held in Dargai jail, NWFP.

5. Many POWs in Lahore Jail. In the biography of Benazir Bhutto, British historian Victoria Schofield reported that a Pakistani lawyer had been told that Kot Lakhpat Rai prison in Lahore was housing Indian POWs from the 1971 war. They could be heard screaming from behind a wall, according to an eyewitness within the prison.

7. Indian pilots. An American General Chuck Yeager also claimed in his autobiography that during the 1971 war, he personally interviewed Indian pilots captured by Pakistan.

8. Visit to Pakistani Jails. The families have also claimed that on the two occasions when they were allowed to visit the Pakistani jails, the jail guards privately attested to the men being alive — before they were ushered away by the prison authorities.

The Ministry of External Affairs in an affidavit submitted to the Punjab and Haryana High Court in 2017 informed the court that the Pakistan government has neither provided consular access to the prisoner of war nor did it respond to India's request to confirm Dharam Pal Singh's detention.

Havaldar Dharam Pal Singh was captured by the Pakistani Army in 1971 and his wife Pal Kaur had referred to an affidavit filed by one Satish Kumar of Ferozepur, which had claimed that Dharam Pal Singh was alive and was lodged in the Kot Lakhpat Rai Jail in Lahore (the same one mentioned in Benazir Bhutto’s biography), which is also known as Central Jail, Lahore.

Satish Kumar in his affidavit has said he was an inmate of the same jail between 1974 and 1976. Pal Kaur also cited the case of Jasbir Kaur whose husband Major Kawaljit Singh (Shaurya Chakra winner) was also in a Pakistan Jail.

It is a matter of shame that Pakistan did not have the large-heartedness to return our 56 POWs when we had returned their 93,000 POWs. And today they talk about how they feel for those who have butchered our people in Jammu and Kashmir.

They talk about it being a ‘holy’ war, when every action of theirs is completely unholy. What is equally shameful is that political parties of the United Kingdom — that nation which is, directly and indirectly, responsible for thrusting that war upon us — think it fit to side with Pakistan.

Would they keep quiet if their Army men were held as POWs in a terror-mongering country such as Pakistan? Would any European country allow for it?

It is time our government took a hard stand and got our POWs released if they are still alive. If not, the Modi government should force Pakistan to disclose complete information about their deaths, so that the families and loved ones of the POWs get some closure, finally. We owe it to our brave soldiers.

The following image captures the timeline of the evidence obtained for the existence of Indian POWs in Pakistan. It has been created from the timeline shared by Wing Commander Retd Satyam Kushwaha.

Below is the list of the POWs with their Rank and Unit. This list was tabled in the Lok Sabha in 1979 by Samarendra Kundu, Minister of State of External Affairs, in reply to a question raised by Amarsingh Pathawa.

And here, put up on a wall in the 26 Squadron Museum, Pathankot, is the summary of the battle called Operation Cactus Lily, fought in December 1971 to which all these missing POWs belonged.