The Myth Of The ‘Kerala Model’ 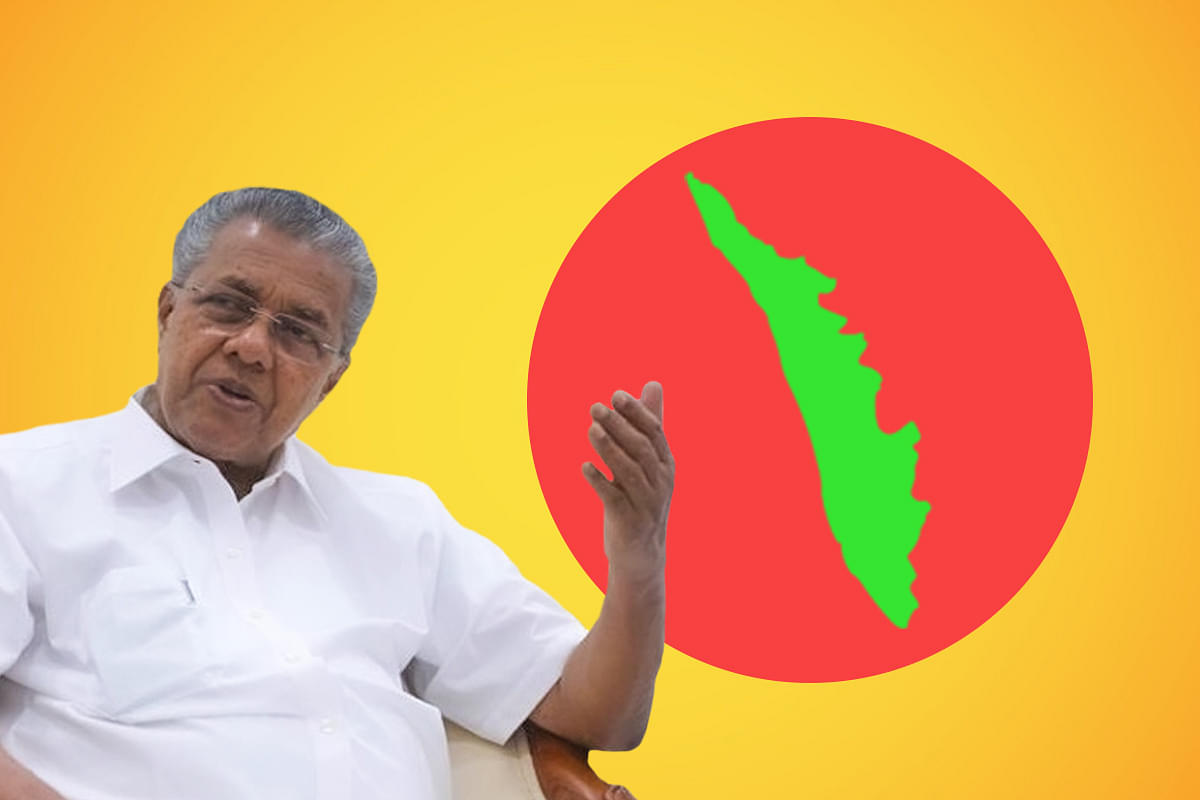 There’s something curious happening in mainstream media: the more the communists in Kerala fail to bring an alarming epidemic situation there under control, the louder the narrative of a successful ‘Kerala Model’ gets. According to the BBC, “…Kerala has done an admirable job in controlling the spread of coronavirus unlike the rest of India”

Doctors, epidemiologists, and data analysts have been aggressively corralled by media houses in the last few weeks, to concoct an argument that things actually aren’t as bad as they are being made out to be. Absurdly, this attempt comes at a time when Wuhan virus cases, fatalities, and positivities linger agonisingly in high plateaus, and the state’s economy lies shattered by months of lockdown.

The principal contentions supporting a successful ‘Kerala Model’ are as follows:

One: Kerala had flattened the curve, but lost out because vaccine supplies were inadequate. Former Finance Minister of the state, Thomas Isaac, tweeted that “…Kerala has managed Covid better… present spike in case load is due to failure of Centre in providing sufficient vaccine.” Not to be left behind, our omniscient ultracrepidarian, Dr Shashi Tharoor, also promptly joined the fray and tweeted a similar plea to the Centre, asking for more vaccines.

Two: cases in Kerala are rising because the state administration protected its people from the virus more effectively. This argument draws upon national serological surveys which found that Kerala has the lowest prevalence of antibodies in the country.

Three: Kerala has done a good job of detecting cases — the best in the country, in fact, and is also under-reporting cases the least in the country. This inference is made by blindly estimating a theoretical number of actual cases (detected and undetected), by combining reported cases in a state with the percentage prevalence of antibodies in a state’s population from the serological surveys.

Four: Kerala has the most cases because it has the lowest prevalence of antibodies amongst a population. In other words, percentage population susceptibility is driving case counts. This is a variation on the argument put forward in point three above.

Five: Kerala has done well because cases were kept low enough to prevent the state’s public health infrastructure capacity from being overwhelmed.

Six: according to Health Minister Veena George, the current epidemic situation in Kerala is actually the result of a well-planned strategy, which anticipated a plateau period.

Seven: maintaining a plateau is actually a strategy to achieve herd immunity.

And eight: The state is a victim of its own success because it is fatigued by lockdowns. So, criticism of the state’s handling of the epidemic is unfair.

Let us analyse these contentions made by such eminent personalities, using the same data they did, and see if their arguments hold water. Is the ‘Kerala Model’ truly worthy of emulation, or is it in fact a disastrous myth?

One: Thomas Isaac uses a cause-and-effect principle to attribute a rise in daily cases to the non-availability of vaccines. This is disproved as illogical, because he is trying to establish a relationship between past inadequacies of testing, tracing and isolation, with present efforts to inoculate the population. Even Marxists can’t reverse time.

Indeed, as the chart above shows, Kerala’s first wave of 2020 never really died out, and its second wave began before the vaccination drive picked up pace in earnest.

Cases and test positivity began to rise further in March 2021, from a pre-existing high of over a thousand cases a day, and in step with declining testing, when the percentage of the state’s population covered by a first dose of the vaccine (black curve), was barely 3 per cent.

How can Isaac argue that a lack of vaccines is a cause, when his government’s inability to contain infections, the effect, predates the vaccination drive?

Two, Three and Four: These arguments use the serological survey to allude that the state successfully protected its people from the virus, detected cases more efficiently than others, and undercounted cases less.

There are multiple flaws here. First of all, the latest sero-survey is non-representative, with a wide error band, since it only covers 70 districts in the entire country. Further, the survey does not include most of the hotspots contributing the largest number of cases in India: Delhi, Ahmedabad, Mumbai, Pune, Bhopal, Indore, Jaipur, Khorda, Lucknow, Kolkata, and East Godavari, for example, were skipped. And with specific reference to Kerala, only three contiguous districts in central Kerala were covered, which means that two of the worst-affected districts, Malappuram and Kozhikode, weren’t part of the survey at all.

Consequently, deriving theoretical estimates of potential total cases by extrapolation, while excluding the worst-affected districts, is an incorrect scientific method, which will only return non-representative figures that can’t be validated.

Further, how can low sero-prevalence in Kerala be used to show that the state protected its citizens, while also being simultaneously employed to argue, that it is this same low sero-prevalence which is the cause for rising cases? It’s a contradiction. It has to be one or the other: either you protected your people, or you didn’t. This is the level of intellect being deployed to make a case for a successful ‘Kerala Model’.

Now, coming to the chest-thumping about tests, the argument is that Kerala has tested more per million, and detected more cases, more efficiently. Here’s a counter-question to the apologists before the rebuttal: if that is so, then why hasn’t the cumulative and test positivity come down to below 5 per cent, even after so many months?

Do they even understand that they are actually disproving themselves by this line of argumentation? The simple reason is that, efficiency in containment of an epidemic is best determined by evaluating how quickly a state administration managed to nip the spread in the bud before a significant portion of its population was infected.

And the easiest way to make this evaluation is by plotting cumulative positivity against tests per million. If a state is able to bend the positivity curve below the WHO-defined 5 per cent safe zone line, before a quarter of its population gets infected, then it may be deemed that the state has done a good job. A second chart below tells it all:

As we can see, Bihar, Uttar Pradesh and Gujarat contained the situation well before the epidemic in Kerala (orange curve) raged once more out of control. That is the crucial point: higher tests-per-million is not some sort of achievement, as uninformed apologists make it out to be. Rather, it is a mark of failure.

In Kerala, it is as if testing is being done for testing’s sake, like the mindless metronomic activity of an automaton, with no thought given to reducing positivity to necessary levels, before a larger percentage of the population gets infected.

But, this approach also actually ties in with arguments Five, Six and Seven combined: about maintaining an anticipated plateau through a well-planned strategy, without putting undue pressure on health infrastructure. Put together, it sounds ominously as if the state might be quietly following a policy goal of herd immunity through infections. If this is true, and Swarajya is not saying that it is, then it is an extremely serious matter which probably contravenes Union policy directives in a culpable fashion.

Look at this sentence from an article, and then link it to Veena George’s statement to a television channel, about ‘maintaining a plateau’ just below threshold levels: “One could argue that this is the idea of ‘flattening the curve’: keep the cases at a low, manageable level for the healthcare system for as long as possible until the infection reaches the herd-immunity threshold.” Have the apologists inadvertently put the Kerala government in the dock, in their eagerness to make an un-makeable case?

Why else would anyone in their senses want to ‘maintain a plateau’?

The Kerala government had better deny this soon, and clarify with proof that they are not following, and have not followed, an unannounced policy of trying to achieve herd immunity. If not, questions will be raised, and it will be a Lady Macbeth moment for the Marxists, both for the fatalities that occurred, and the livelihoods lost to the rigours of an unending lockdown.

The last point, Eight, is about a fatigued Kerala somehow being a victim of its own success. The prosecution’s rebuttal is fairly basic: what success, when the epidemic is raging so badly out of control there? Essentially, this is an emotional argument, a tautology, which rebuts itself. If a government is so weighed down by the epidemic, that it is too fatigued to function efficiently, then it can very well resign and go home.

All that remains for review then is the unsavory epidemic politics practised in the state. Politicians and commentators who say that people mustn’t celebrate Onam this time, without severely castigating a decision to open things up for Eid, are merely playing the old appeasement game.

It has no real bearing on an objective, scientific assessment of epidemic management in Kerala. The point is: you don’t even need to try and correlate a rise in cases, with a mindless decision to temporarily lift lockdown restrictions for Eid; these hoary arguments, and the ‘Kerala Model’ they seek to build, both come apart well before that.

In any case, experts making such selective recommendations only further erode what little credibility they had left, and, in fact, make it extremely difficult for them to be taken seriously any longer. Meaning, that these statements are better ignored by data analysts, and best tackled politically.

In conclusion, we see that basic principles of statistical analysis were bent and broken to somehow try and demonstrate that the communists in Kerala had done a good job of containing the epidemic. In reality, the ‘Kerala Model’ was an illusion right from the start.

Why they do this is beyond our moral ken, but the way they do it, is a lesson in how not to use, abuse, or misuse epidemic data, to ineptly argue a futile case. Sophistry of this sort has grave consequences on public health, and it had better stop.