The Origin And Spread Of Jihadi Terror In Karnataka 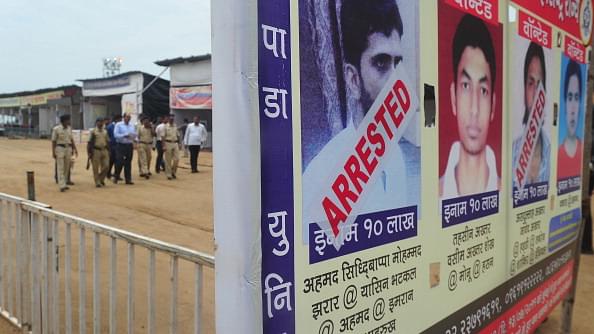 A police team walk past a poster featuring wanted and arrested alleged militants Yasin Bhatkal and Asadullah Akhtar during a security inspection in Mumbai. (INDRANIL MUKHERJEE/AFP/GettyImages)

The origin of terrorism in Karnataka can be traced back to 1993, when Bhatkal taluk of Uttara Kannada district witnessed the first major instance of communal disharmony post Independence. The violence, which continued for over nine months, claimed 17 lives and left hundreds more injured. It was not just the Uttara Kannada district but the entire state of Karnataka was shocked at the scale of violence seen during those months. To understand the gravity of the situation, the Karnataka government formed a committee led by Justice Kadambadi Jagannath Shetty, and asked for a report on the matter.

The Justice Shetty panel submitted its report on the issue in 1994. The report clearly stated that terrorist activities had started in Bhatkal with many training and/or indoctrination camps being organised in the area. It also explained the modus operandi of such activities and the funding received for such camps from West Asia.

The ideal thing for citizens to do would be to expect that the government of Karnataka, given the input it received from the Justice Shetty panel, drive out those promoting terrorist activities from the area completely. Sadly, the then Veerappa Moily-led Congress government in the state gave the report a quiet burial, and did nothing to improve the security situation in Bhatkal and the surrounding areas. The Deve Gowda-led Janata Dal government, which was focused on minority appeasement too, couldn’t find time to act on the report either. The price of the inaction that the state paid was the death of Bhatkal MLA, Chitranjan, in 1996. It was quite apparent that while the government was in slumber, the terrorists were wide awake as well as active.

The Karavali region in Uttara Kannada was, until the 1990s, a region of relative peace. But in that very decade, it became notorious for being a terror hub. We need to keep in mind that Bhatkal historically has been a place with immense influence of Jainism. The place was ruled by Cholas, the Hoysalas, the Vijayanagara Samrajya, the Keladi Nayaks, as also the Mysore tyrants, Hyder Ali and Tipu Sultan. This serene place, having a proud history, is now linked to terror, with the Bhatkal brothers prominently occupying the minds. What can be more distressing?

There are five people, who are responsible for this state of affairs – Sultan Armar, Shafi Armar, Riyaz Bhatkal, Yasin Bhatkal and Iqbal Bhatkal. The seeds of terror in the area were planted during the Idgah Maidan dispute of Hubbali. At the height of the Idgah Maidan dispute, several political parties, namely the Congress and the communist parties highlighted their intent of appeasing the minority community in lieu of votes. It was under these circumstances that the Students Islamic Movement of India (SIMI) was born under the leadership of Riyazuddin Azir.

The plan of coastal Karnataka-based founders of SIMI was to widen its base quickly and comprehensively to other parts of India, especially northern Kerala. SIMI meetings even started taking place in madrassas and Islamic-themed schools. The outwardly student organisation quietly built up organisational and terror capabilities within the group. Later, a prominent SIMI member was caught in a bomb blast case in Madhya Pradesh. Through him, many secrets of the ‘student’ organisation started surfacing before the authorities. The intelligence and central investigation forces came to deal with this menace by attacking SIMI through raids, intense investigations, custodial questioning wherever the organisation had a presence. The followers of Nagori, the terrorist caught in Madhya Pradesh, had vowed to carry out terror activities across the country. However, the central government put it in the list of banned organisations and put a temporary clamp on its activities.

In all of this, Paksitan’s two-pronged strategy towards spreading terror was to, a) make foreign terrorists infiltrate into India, and b) make terrorists out of radical Indian Muslims. Bhatkal, with its 75 per cent Muslim population provided a fertile ground for Plan B. We can be sure that Pakistan would have noticed the huge number of Bhatkal-based Muslims in the top echelons of IM. The Navayati Muslims in that area, unlike Muslims from Tamil Nadu and Kerala, do not speak the local language. They use Urdu for their day-to-day interactions, and this was very useful to the Pakistanis, who turned Bhatkal into their test lab for terror and indoctrinated thousands of Muslims to consider it their life's mission to hate the few Hindus, who remain in that area, and those that live elsewhere in India. Pakistan’s immediate focus was to try and flare up communal tensions and spread Darul Islam.

This was how Bhatkal and the terror emanating from that taluka gave Karnataka the first taste of terrorism. Recently, America’s Central Intelligence Agency (CIA) included Shafi Armar in the list of most-wanted global terrorists. Sultan Armar, Shafi’s brother and resident of Bhatkal went on to establish another terror organisation – Ansar Ul Tauheed (AUT). Shafi Armar has taken over AUT after the death of Sultan Armar and now functions as Islamic State’s chief recruiter in India.

On the other end, the power of the network run by Bhatkal brothers can be determined by taking a look at the 25 July 2008 serial bomb blasts in Bengaluru. It was two months since the Bharatiya Janata Party had formed its first majority government in south India led B S Yeddyurappa. The blasts shook the ruling party and the citizens of Karnataka. The state police’s investigation led to the arrest of an ‘activist’ called Eedappan Thodika Jainuddin, alias Abdul Sattar alias Saleem. Ironically, the information revealed by him was more shocking than the bombings themselves. The activist had received orders from Riyaz Bhatkal to carry out bombings in more than 150 places in the city. In preparation for the attacks, Saleem had done recces of places like Vidhana Soudha, Vikasa Soudha as well as many IT/BT companies in Bengaluru. Observing the tight security arrangement at these locations, Saleem decided to detonate the explosives on Ulsoor Road, Mysore Road, City Market, Kalasipalaya, Shivajinagar and other such areas. All the locations had a sizable Muslim population, thus ensuring maximum Muslim casualties in any attack.

Saleem believed that this would spark large-scale communal tensions across the state. Interestingly, Saleem had received only Rs 10,000 to carry out these attacks. The materials for the bomb were all sourced from Kerala. This demonstrates how motivated these so-called activists were to spread terror in the country.

The Recent Past And The Present

To understand the mindset of the present administration, we need to look back to 2012, when the Congress was in opposition in the state. Every year, when Republic Day and Independence Day approached, the supporters of a particular ideology were arrested in Karnataka. Dinesh Amin Mattu, currently the media adviser to Chief Minister Siddaramaiah, had publicly shed tears expressing concern over the mental trauma that these individuals were speculated to have undergone. This author has no objection to Mattu having a special affection towards these communities. However, a glance at a list of people, who were arrested in cities like Bangalore, Hubli, Karnataka during the Independence Day of 2012 tells us a different story: Shoaib Ahmed Mirza, Abdullah alias Hakim Jamadar, Aajaz Mohammed Mirza, Muhammad Yusuf Nalband, Riyaz Ahmad Bhatty, Muti ur Rehman Siddiqui, Ubudullah Imran Bahadur alias Samir Uruf Imran, Mohammad Sadiq Lashkar alias Raju, Wahid Hussain alias Sahil, Baba alias Mehboob Bagalkot and Jaffar Iqbal Shulapur. These are people, who were linked to and are involved with various terrorist organisations that are under investigation. All these suspects had planned to kill some Karnataka MLAs, leaders of Hindutva organisations, journalists, and sabotage the Independence Day celebrations.

After the Siddaramaiah-led Congress government came to power in Karnataka, a number of jihadi organisations have been trying to reap the harvest from the seeds of terror sowed in Bhatkal. The organisations now recruiting and/or operating in the state include HuJI, the Lashkar-e-Taiba, Popular Front of India, SFI, KFD and other similar organisations. These organisations are spreading across the state at an astoundingly fast rate. Karnataka got a taste of this during the recent Tipu Jayanti celebrations organised by the Siddaramaiah government. The celebration of Tipu Sultan’s birth saw more than 5,000 Mapilla Muslims crossing over from the Kerala border to create a chaos in the entire southern and coastal Karnataka region. This was something that state Home Minister Dr Parameshwara himself had admitted to.

Looking back, the recent incidents in the Karavali region, it is certain that jihadist ideology has developed firm roots in the region. What is, however, difficult to explain is the inaction (and thus tacit support) towards such activities. The citizens of Karnataka are unable to understand the intention for this pervasive inaction by the state. In the past four-and-a-half years, the Siddaramaiah government has shown zero interest in curtailing the activities of these terrorists. More than 1,700 Islamist activists, who were taken into custody or imprisoned for attacking a police station during the previous government, have been released without proper probe or investigation. This laxity is in stark contrast with the cases that were brought on BJP leaders, who attempted to take out a rally to Mangalore to protest against these jihadi outfits. The Siddaramaiah government, in one instance, booked Sangh leaders for organising a funeral procession for an activist, but did not try to find out who threw stones at the procession. To this author, this episode is the best indicator of the Chief Minister’s attitude towards terrorism and Islamist thuggery in the state.

The communal conflict that is being currently perpetrated along the coast of Karnataka, cannot be typecast as just another Hindu-Muslim riot. This is not a run-of-the-mill ideological face-off between two religions. This is an indicator of the intensity of jihadi terrorism that has taken root in southern India. While Siddaramaiah continues with his tacit support to such elements within the state, Karnataka is staring at a dark future, one that will be the torment of each and every Kannadiga.

This article first appeared in the Kannada paper, Vishwavaani.

Also Read: How Siddaramaiah Turned Karnataka Into A Haven For Islamism

Rohith is a Writer and Regular Columnist at Vishwavaani