The Return of Salwa Judum? 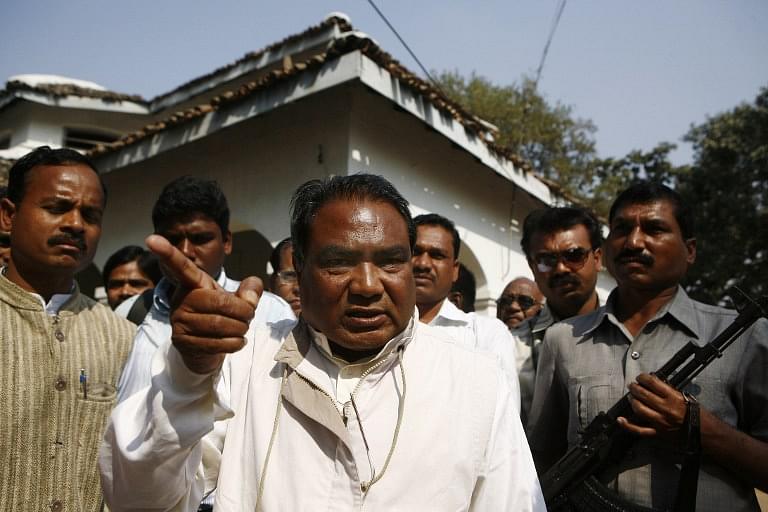 Ask anyone in Chhattisgarh’s Bastar district about Chhavindra Karma and the answer comes pat:“He’s not a patch on his father.” Legacy, perhaps, is the biggest obstacle faced by 33-year-old Chhavin, son of the late Mahindra Karma, a respected Congress leader who was killed by Maoists in 2013 while campaigning in the Jeeram Ghati.

Legacy, and the seemingly less troublesome fact that the senior Karma’s notorious, armed, civilian, anti-Maoist movement, Salwa Judum was banned by the Supreme Court in July 2011. With an innocuous name, Salwa Judum or Peace March, backed by the Chhattisgarh government, armed ordinary civilians to fight against Maoists in 2005.

The result was anarchy and chaos — villagers were sent to Salwa Judum camps in jail-like conditions and hundreds of innocent tribal folk were killed in the name of peace. Thousands fled their villages to neighbouring states, unable to face continual persecution from the Salwa Judum, the Maoists and security forces.

Chhavindra Karma wants to restart all of that, but in a peaceful manner, he says. “We have named it Vikas Sangharsh Samiti,” says Karma Junior. “You cannot call it Salwa Judum Part 2. You know that the Supreme Court has banned it. We can’t go against the court order,” he says.

Karma was all set to kickstart his Samiti on the second death anniversary of his father on 25 May with former Judum members P Vijay, Soyam Mukha, Chaitram Attami and Sukhram Dadi amongst others. But that has not happened. “A day before our launch, our supporters were attacked, and two of them were killed in Kesapur and Gondpal villages,” he says nervously. “We have postponed it. We can launch it at any time. In fact, even the routes for our padayatra are mapped and ready.”

The junior Karma is a restless man surrounded by menacing gun-toting security men. He talks fast, almost impatiently, and refuses to meet the eyes of the person he addresses.

Karma aggressively defends the Judum and blames the state government for not defending it properly in court. “The allegation that weapons were given to villagers is false,” says Karma. “Only the uniformed forces provided by the government for security used to hold weapons. Even when the fire was exchanged, security forces fired back only in self-defence. The state government did not defend the Judum properly in court,” he adds.

“Both Salwa Judum and the Vikas Sangharsh Samiti want peace and development in Bastar,” continues Karma. “The goal is the same, only the methods are different. A lot of wrong people had joined the Judum. We are going to rectify these deficiencies in the Samiti,” he says.

People in the administration though say that the Bastar of 2005 is not the Bastar of 2015. Much has changed since the days of Salwa Judum. Close to 40,000 CRPF troops are on the ground in Bastar and Maoist strongholds around the area. An equal number of police and STF personnel complement operations against Maoists in the region. In the past three years, the forces have gained a clear upper hand, pushing the Maoists deeper into the jungles. In such a scenario, observers say there is no need for a second Salwa Judum. “I do not see this Vikas Sangharsh Samiti taking off,” says Amit Kataria, District Collector of Bastar. “There is not enough support from either Congress or the government. The state government will certainly not support it. Chhattisgarh has changed now. At that time, there were no security forces and these regions were very backward. Now the situation is different and not conducive for a repeat of Salwa Judum,” he says.

Karma’s senior colleague and Chhattisgarh Congress Committee President Bhupesh Baghel indicates that the party does not approve of Karma’s move. “The Congress party has a stand, and we are conducting programs based on those,” he says. “The party cannot be responsible for what groups people are forming outside of the Congress-approved programmes. Mr Karma has been requested not to indulge in forming such groups,” he explains.

While the Congress shies away from Karma’s plan, arch political rival BJP is strangely eager to support it. “It is an individual’s programme, not his party’s,” says Subahoo Kashyap, BJP leader and former MLA of Bastar. “Salwa Judum is not about weapons or violence. It is a movement of the people, for the awakening of the people. The Chhattisgarh government under Chief Minister Raman Singh is committed to eradicating Maoism. What Karma plans to do is a good thing; it will stop the youth in villages from getting diverted. We welcome it,” he says.

Local leaders also say that the Rashtriya Swayamsevak Sangh (RSS) actively supports the Congressman’s plan. One of the petitioners in the Salwa Judum case in Supreme Court, activist Nandini Sundar, warns of the dangers of a repeat of Salwa Judum.

“There was no public sanction even for Judum I,” says Nandini Sundar in an email exchange with Swarajya. “People were forcibly brought to Judum rallies and camps, and over the years escaped home as and when they could. Certainly no one is in favour of Judum II and the Karma sons have in the past themselves admitted it was a mistake,” she writes.

“The situation is not vastly, but somewhat, different from 2005. In 2005, there was no public knowledge of what was happening — since then there has been considerable attention to the region — not enough, of course, but at least it is not the black hole it once was,” she explains.

Chhavin Karma is well aware of the rabid opposition his Vikas Sangharsh Samiti could get from across the political spectrum. He is also wary of crossing the apex court’s diktat. But the legacy, in politics, is crucial. Chhavin, simply put, wants to be his father’s son.