The Right Must Carve Out Its Own Intellectual Space 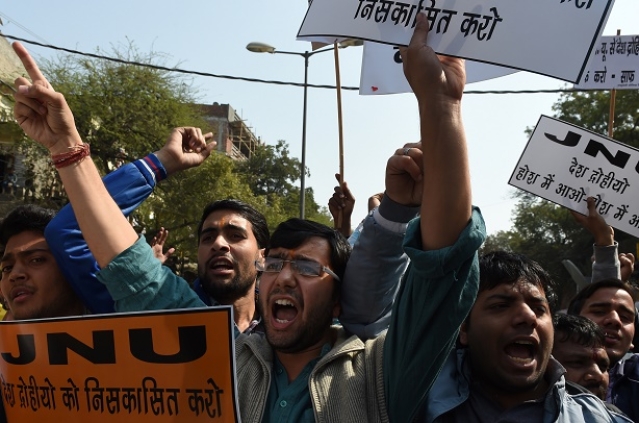 In September 2015, Prime Minister Narendra Modi attended a townhall at the Facebook Headquarters in California. Mark Zuckerberg, the founder of Facebook, conducted the townhall which was broadcast live across the world on YouTube, among other platforms. For an Indian, these were two men who illustrated the enormous power of social media and the democratization of popular discourse.

Mark Zuckerberg revolutionized social media and communication through Facebook. The site now has a whopping 1.4 billion users. Narendra Modi, on the other hand, won a massive electoral mandate in 2014 and his campaign’s use of social media, including Facebook, played a major part in reaching out to urban middle class masses directly without the intervention of the old media.

Over the past year or two, the power of social media has been preeminent in Indian elections, as shown not just by the BJP’s victory in 2014, but also by its defeats in Delhi and Bihar. The AAP victory in Delhi was based on an extremely tech savvy campaign run by its volunteers, while Prashant Kishore helped Lalu Yadav and Nitish Kumar beat the BJP in Bihar with an innovative campaign.

In the age of Twitter, Facebook and WhatsApp, public engagement and debate is on the rise, and the Indian electorate seems to be a far more active participant in democratic debates than in the past, when it was more of a passive consumer of news and narrative generated in newsrooms.

Over the last few years, another major impact of social media has been its influence on the coverage of old media channels. Today, factual inaccuracies get called out immediately and editorial double standards are exposed instantly on social media.

Social media outrage also forces old media channels to cover ‘inconvenient incidents’ such as the recent riots in Malda. The Malda riots received decent coverage – albeit late by a few days – instead of being completely ignored, which is probably what would have happened in the absence of social media pressure.

In a column for Project Syndicate, Sanjeev Sanyal writes that the process of taming ‘India’s Elites’ is well on its way. From evicting high profile squatters in Lutyens’ bungalows to court cases against the ‘first family’ of the country, there is a sense that India’s elites are at last being held accountable to the common rule of law.

Therefore, thanks to the advent of social media, we are now seeing more active participation from the masses in the electoral process, more informed conversation on issues which matter to the public, a challenge and a counterpoint to the narrative of the old media – especially English news channels – and also a beginning of holding ‘India’s Elites’ accountable to the rule of law. So has the balance of power shifted decisively from the ‘Elites’ to the ‘Masses’? Not entirely.

A little less than two years into the Narendra Modi government, many supporters are slowly realizing how difficult it is for the government to implement its agenda with the lack of numbers in the Rajya Sabha. But numbers aside, real power and clout still seems to be trapped in an elite ecosystem of judges, bureaucrats, ‘five star activists’, think tanks and NGOs.

The story of Supreme Court judges being approached at midnight to deliberate on the mercy petition of a convict to be hanged generated much ire among the public. But even leaving aside matters of life and death, we are seeing hitherto unseen judicial activism. This has been noted widely by many in the media. Bloomberg View commented that it was not Prime Minister Narendra Modi but the courts that were running the show in India.

Besides ruling that the Parliament-approved National Judicial Appointments Commission (NJAC) Act is unconstitutional, Indian courts have also been pontificating on all sorts of issues. In a shocking instance, the Nagpur Bench of the Maharashtra High Court advised the public to stop paying taxes to protest against government corruption.

Among other things, courts have themselves decided to double the taxes on diesel vehicles entering Delhi while also getting involved in religious matters such as entry into temples and local folk customs like jallikattu. The list of increasingly dubious judicial overreach is never ending.

The recent ruling of the Telecom Regulatory Authority of India (TRAI) on net neutrality is another instructive instance on the exercise of influence and power in India’s policy making circles. Indian technology entrepreneurs and net neutrality activists came together to campaign against Facebook’s Free Basics and were eventually successful in convincing India’s telecom regulator to prohibit discriminatory pricing, thereby effectively forbidding Facebook from offering a few websites for no cost to those who can’t afford an internet connection. 457 companies signed a single letter opposing Free Basics while more than 800 entrepreneurs wrote a letter to the Prime Minister explaining how it was a threat to India’s start-up ventures.

There were good arguments on both sides and the debate did not split down the usual ideological left-right split. Yet, one cannot help but note that the argument was won by the side that was more organized, put more effort into it and had more skin in the game. And in the process, one does feel that India’s unconnected masses, at whom this product was aimed, remained under-represented in the consultation process.

Those who made the case for net neutrality can also be described as India’s ‘new elites’. These were policy analysts, activists, start-up entrepreneurs and venture capitalists. And over the coming years, there is bound to be greater influence and pressure from these groups in shaping public policy in India according to their vision.

What is noteworthy, apart from what captures the interest of India’s elites and old media, is also what is totally excluded by them in their discourse. Take the case of the Right To Education (RTE). The RTE is conspicuous by its absence in almost every conversation that one sees either on television or print media. It is almost singularly ignored in India’s plethora of weekly op-ed columns, and the truth is that apart from a few discerning folks on social media, the sectarian nature of the law is in fact unknown to almost every middle class Indian who is otherwise well informed.

One of India’s leading intellectuals Pratap Bhanu Mehta made a passing reference recently on this issue, which is today only a complaint of the right-wing on social media. The paragraph in which he talks about both the incredible double standards of morality being practiced around banning jallikattu and the sectarian nature of the RTE is worth mentioning here:

The third faultline is how difficult it is to find a secular language in which to articulate common meanings on moral and political issues. The jallikattu case is interesting because it shows the difficulty of articulating a common understanding of cruelty. Defenders of the tradition have a point that on any conceivable measure of cruelty to animals, we tolerate far more in the name of religion or even our eating habits. If the application of a standard of cruelty to animals is not to appear arbitrary, it will have to involve a far-reaching transformation of our practices. The growing resentment over RTE exemptions to minority schools raises the question of whether this issue necessarily needed to be framed in terms of minority and majority. Could we not have found a way to conduct this argument through a consideration of what first-principles thinking on freedom of association and property would look like? Instead, the organisation of education has already been legally communalised with the imprimatur of the court. The question is: Can issues like cruelty to animals, freedom of association, gender justice, non-discrimination in civil society, all elements of a secular morality, be articulated in a way that they become an object of “overlapping consensus”, to use Rawls’s famous phrase. And can they be enforced in ways that do not reinforce the sense of communal competition, state arbitrariness? Unfortunately, the courts are not yet providing a framework that produces clarity on these issues. And our politics, of course, never takes any bull by the horns.

This article however remains a rare exception in India’s secular-liberal ecosystem. The grip of India’s elites – dynastic and otherwise – on the political narrative probably slipped a little, but it remains as strong as ever in the realm of policy making and implementation.

There is a saying in the West that while right-of-center parties are in political office once in a while, it is only the Left which is able to truly exercise power. India’s experience till date has been completely in line with this. And so, while those who are of a right-of-center persuasion have made a dent in the outer circle of power (electoral politics), like the young Abhimanyu of Mahabharata, they lack the knowhow to penetrate the inner circles of Chakravyahu of power (policy making and implementation).

India’s right-wing, which is a very large umbrella, needs to add institutionalized intellectual heft to build on its current popular appeal among the masses. Without that, the tenures of various right-wing governments, at the Centre and the states, will feel like missed opportunities to many of their followers.