The Sedition Law Sucks: Time For The Government To Water It Down To Limited Situations 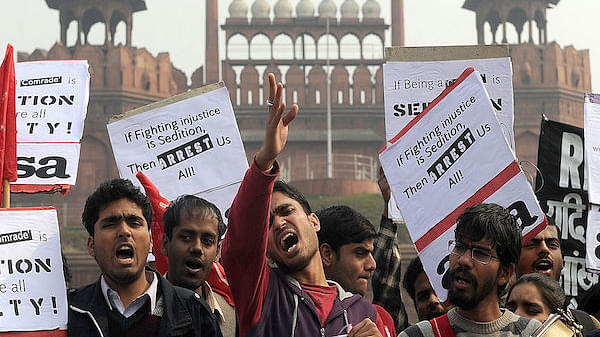 When the law is an ass, fools will have a field day, and the media will make a meal of it. The sedition cases sought to be foisted on actress-turned-politician Ramya and Amnesty International, the former for merely saying that “Pakistan is not hell, and the latter for allowing some “azaadi” slogans at its event, are puerile.

The private complaint against the actress is likely to be junked, since it makes no sense. In any case, it is not the people of Pakistan who make it a hell, but its Deep State, including the ISI and the Army. By nurturing violent jihadi groups in its backyard, the Deep State has reduced Pakistan to a hellhole of radical violence. Even the case against Amnesty will ultimately bite the dust, though there is much to criticise in Amnesty’s flawed definition of human rights.

But do we have a hellish problem in Section 124-A of the Indian Penal Code (IPC) which talks of the crime of sedition? The clause is so all-encompassing that anyone even criticising the government can be put in jail.

“Explanation 1.—The expression “disaffection” includes disloyalty and all feelings of enmity.”

This is simply too wide a definition and can be used by any government to jail its opponents, even though the explanations to this law clearly say that political opposition should not be considered sedition. But even the explanatory clause has ambiguities. Explanation two says “Comments expressing disapprobation of the meas­ures of the government with a view to obtain their alteration by lawful means, without exciting or attempting to excite hatred, contempt or disaffection, do not constitute an offence under this section.”

The problem is in the second part of the sentence, since most anti-government protests tend to get violent, and it is easy for the police to say attempts were made to “excite hatred, contempt or disaffection”. No political party chooses its words carefully when railing against rivals, and one has to accept this as part of the Indian ethos of over-the-top emotionalism.

Indian political activists always call for the overthrow of elected governments whenever they disagree with them, and supporters tend to burn a few buses or vehicles enroute to rallies.

The definition of sedition should be narrowed down to one simple thing: a call to secede from the Union accompanied with calls to violence. It should not apply to political opponents who do not call for secession.

The law of sedition should, thus, apply to the “azaadi” violence in Jammu and Kashmir, but not to political protests, like the Jat agitation in Haryana, or the Dalit protests against cow vigilantism, which could sometimes get violent.

When the Supreme Court takes a call on this provision in the IPC, it should read it down to a narrow meaning, or ask the government to amend it.