The Sinister Games Of The Church In Tamil Nadu 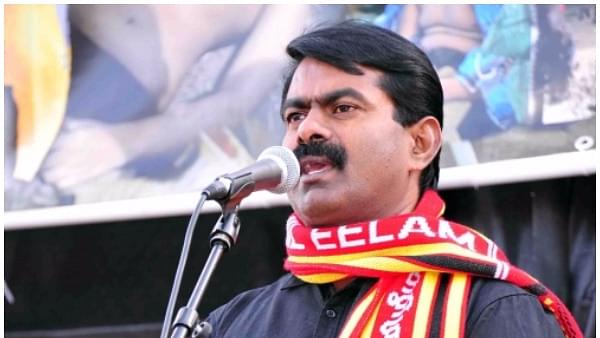 Whenever ‘St Joseph’s College’ Trichy is mentioned, most Indian minds cutting across linguistic and religious barriers associate the name with a great personality and his memoirs, Dr A P J Abdul Kalam. In his autobiography, Wings of Fire, Dr Kalam recollected the fond memories of Rev Father T N Sequeira of St Joseph’s:

On Deepavali, on his instructions, the Brother in charge of the hostel and the mess volunteers would visit each room and distribute good gingelly oil for the ritual bath.

However that may soon change. The institution that produced some of the greatest personalities of Tamil Nadu may soon be identified as the epicentre which nurtured racist storm troopers of Tamil separatism.

Seeman, the founder leader of Naam Tamilar (‘We Tamils’) party is a curious combination of many strands. He not only propounds a separate racial and linguistic identity for Tamils but also a separate religious identity. He also wears his Luddite cap, so to speak, when he opposes the Neutrino project. Yet, he threatens eco-activists were they to oppose the imaginary dams he would build in Tamil Nadu to deny water to Kerala - he would have them deported or worse. He also believes strongly in Illuminati conspiracies and asks his cadre to familiarise themselves with Illuminati conspiracies against Tamils. He degrades Hindu puranas in the most vulgar language while at the same time claiming that Hindu gods from Shiva to Muruga are all his ancestors. He justifies the destruction of Bamiyan Buddha by Taliban.

His party’s public banner announces Adolf Hitler as one of the guides of his movement. He proclaimed in a recent speech on the authority of Alex Collier that Tamil was the original language of humanity. Alex Collier, he says, is a linguist when the reality is otherwise. Collier is not a linguist. He says he got the information from extra-terrestrials of Andromeda.

Tony Joseph, a former editor of Businessworld magazine, in Seeman's rhetoric, becomes an Oxford professor who has discovered that Tamil was the original language of all South Asian inhabitants.

A rabble rousing Tamil chauvinist, he is one of the fringe elements in mainstream Tamil politics. Yet he has been vigorously promoted by one section of the media. And now, the Roman Catholic Church seems to have embraced him and has started promoting him to the unsuspecting students in its academic institution.

One such academic campus happens to be St Joseph’s College, Trichy.

The All India Catholic University Federation (AICUF) had arranged a speech by Seeman in September this year at the college. A large number of impressionable students from the college were made to listen to his rabble rousing speech which was filled with baseless charges against the government. For example, on the goods and services tax (GST), Seeman said to the students that ‘for braille paper and the wheel chair used by the differently abled, there is GST of 5 per cent and 15 per cent respectively but there is no tax for the petrol of Ambani, electricity of Adani and the arrack of Mallya.’

The unsuspecting students exposed to these baseless innuendos erupted into thunderous applause. Even the personal life of Prime Minister Narendra Modi was not spared. ‘He is roaming around the world while his wife is fighting for maintenance’ the chief guest Seeman remarked again to the thunderous applause of students. Interestingly, even the dignitaries on the dais laughed uncontrollably over these remarks. Then, for Aadhaar, he cursed those in charge, ‘Just watch! All these guys would die of leprosy!’ He also went into pseudo-scientific claims of Tamil being the mother of all world languages. Then he called on the students to have ‘racial pride’ and ‘racial conscience’. The speech was filled with quotes attributed to Mao, Lenin and Marx.

The next month, Trichy saw St Joseph’s College host the cultural conference of another fringe Tamil nationalist group. Named ‘Tamizhaga Penkal Seyal Kalam’ (Tamil women work-field), the organisation had announced earlier on Facebook that for them, Indian Independence Day was a black day. They called it a black day for ‘Kashmiris, Central Indian tribes, Punjabis, Nagaland, Manipuris and Mizos’ as well. (When contacted by this writer by phone, the person who attended the call feigned ignorance and denied that they were secessionists: ‘We consider Tamils being suppressed by India culturally; India is exploiting our resources and destroying our language; we want to find a remedy for this.’

The exhibition hosted by the college showed the unscientific ‘Lemurian/Kumari Kandam’ Tamils as the original first humans (and hence Tamil the first language). Then, they went into a totally uncorroborated account of Tamils having a separate culture with separate religion of ‘Maalism’ and ‘Sivanism’ which the panels said were made into Saivism and Vaishnavism by the cunning Aryan Brahmins. Anti-Brahminism, very similar to the Nazi anti-Semitism was shown all over the panels. Tamil kings were alleged to have become puppets in the hands of Brahmins and Brahmins were shown to usurp the lands of Tamils. Interestingly, while this unadulterated Tamil utopia was presented, the historically great Tamil kings, including the Pallavas and imperial Cholas were shown as being bamboozled by the Brahmin priest-craft.

This is not the first time the Church has been playing such a mischievous role in spreading hateful racist theories in the name of social justice. Almost five decades ago, the famous social reformer and educationist of Tamil Nadu, Chithbavananda, in his paper on Christian Hindu encounters, painfully pointed out the way Church officials had called Dravidian movement as a ‘time bomb placed in Tamil Nadu to destroy Hinduism’. The Dravidian movement was given a lot of tactical but not overt Church support. However, Dravidian movement could not achieve what it aimed at. It in a way fizzled out. Today, television channels owned by Dravidian politicians and their families compete with each other for telecasting serials on Ramayana and Mahabharatha. Only thing the Dravidian movement achieved from the point of view of the Church was a disruptive cognitive dissonance.

The Church, relentless in its evangelical agenda, has zeroed in on more virulent elements within the Dravidian movement as well as fringe Tamil nationalist-secessionist movements. Mathimaran, a vociferous Dravidian rhetorician claims that Bharathi, the great Tamil poet was only a Brahmin supremacist. He pits Dr B R Ambedkar against Gandhi much like Kancha Illaiah. He is invited for the training programmes of Christian nuns and his books filled with anti-Hindu hatred are sold in these programmes.

So, clearly the Church now aims to switch to the next level in its crusade against Hinduism in Tamil Nadu. It promotes Tamil secessionist-nationalist fringe groups. While the Dravidian movement considered all Tamil Hindu culture as Aryan Brahminical imposition, these groups take a more nuanced step. They claim that the original Tamil religion and culture were different and were corrupted by ‘Aryan Brahmins’. Seeman, on the other hand, claims Shiva and Muruga to be his ancestors. This claim, where Hindu deities are posited as secular ethnic ancestors, plays well into Christian evangelical agenda. While it gives a psychological comfort of an illusive attachment to Tamil culture, it effectively reduces the spiritual aspects of Tamil culture to a naught. So Shiva is no more the cosmic principle but an ethnic ancestral totem symbol. Similarly, Tamil music and dance forms, temple architecture and literature – can all be reduced to ethnic elements and secularised (only to be later Christianised).

That St Joseph’s College, which has produced some of the finest Indians and good human beings, and which has been served by such dedicated noble souls like Rev Fr T N Sequeira, whose universal spiritual nature was appreciated by none other than Dr Kalam, should have been used for such a divisive hate propaganda against a community and religion is a real shame. It is easy at this point to seek interference of the government to stop such a hate campaign in the premises of a hallowed educational institution, but it will be better if the college administration itself realises its ethical blunder and expresses its regret to the nation.

It is also important that the Tamil Nadu government, through proper scientific and cultural education, immunises young minds against such hate propaganda.