The Tragedy Of Ghoshpara: What Lies In Store If Infiltration From Bangladesh Is Not Stopped 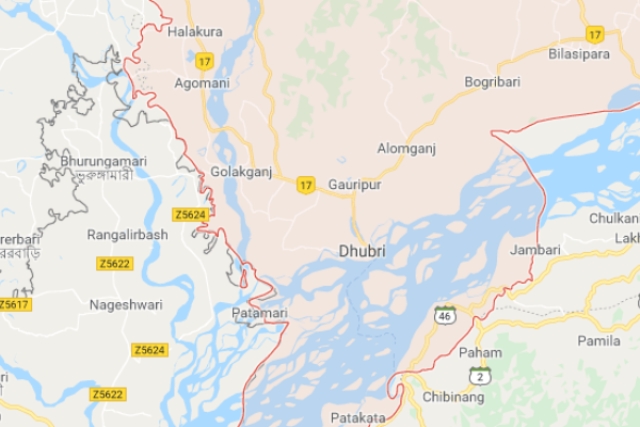 Ghoshpara is situated a few kilometres away from Dhubri town, Assam.

Ghoshpara was once a sleepy little village on the outskirts of Dhubri, a large town in western Assam bordering Bangladesh, Bengal, and Meghalaya. As is evident from its name, it was populated almost exclusively by Bengali Hindus (‘Ghosh’ is a Bengali Hindu family name) who were engaged in agriculture, dairy, and farming. Today, its name has been changed to Gaspara (see map), and it does not have any Hindus. The last Hindu family left, or rather, was forced to leave, in 1992.

Situated a few kilometres away from Dhubri town, this large village of about 150 households on the banks of a wide channel of the Brahmaputra was quite a prosperous one. The Indo-Bangladesh border lies just 1.5 km to its west. And that has been its bane. Since time immemorial, Muslim peasants from East Bengal, which became East Pakistan and later Bangladesh, had been migrating to and settling down in the chars (land formed by alluvial deposits of the Brahmaputra) and cultivating those lands. But till 1951, such migration had been sparse, and it was only after 1951 that it assumed dangerous and vicious proportions.

Sailesh Chandra Ghosh, 72, remembers the village he grew up in and was forced to leave in late 1989. “I remember that till the early 1950s, only Hindus used to stay in Ghoshpara. Then the Muslim population in the char areas nearby started growing suddenly and by 1959, Ghoshpara was completely surrounded by Muslim hamlets. The Muslims who had settled in the chars since the 1930s and 1940s started harbouring fresh illegal migrants from East Pakistan. And the entire Goalpara district (Dhubri was then part of Goalpara district) saw a huge rise in the population of Muslims. The illegal influx seemed deliberate and part of a larger game plan to increase the Muslim population here,” said Ghosh.

The illegal migrants started settling in newly formed chars and, as they grew in numbers, they became more assertive. “They were very hard-working, and I remember they had this amazing habit of saving most of what they earned through farming. The chars were fertile and the yields were very good. So the incomes of these migrants was also quite high. And they had little expenditure, living in squalid conditions, eating off the land, not spending anything on education of their children and very little on clothing. They saved a lot and then started buying farmlands from Hindus all around. Slowly, they became prosperous. They also started squeezing out Hindu traders, and one practice that became very noticeable was that Muslims would only patronise Muslim shopkeepers and traders and boycott Hindu shops and businesses,” said Ghosh, who had five cows and ran a small grocery shop.

Shashi Bhushan Ghosh, 81, was Shailesh’s neighbour in Ghoshpara, and the two families now live close to each other in small houses on R K Mission Road in Dhubri town. The octogenarian, who suffers from arthritis now, recalls his idyllic days at his native village: “We were all quite prosperous and never bothered much about the landless Muslim peasants from East Pakistan settling down in the chars. Some of them even worked as sharecroppers on our farmlands and till the late 1960s, we never had any problem with them. I remember it was in 1965 (the Indo-Pak war) that some of them raised Pakistani flags in the chars, but the police came and pulled those down and arrested some of them. After that, they became somewhat belligerent and assertive and their attitudes towards us changed. By that time, they had grown strong numerically too.”

Shashi had 32 bighas of farmland and owned a small dairy with a dozen cows and a few goats. “Since the late 1960s, the older Muslim migrants from East Pakistan who had grown rich by then started buying farmlands in our, as well as surrounding, villages. Many Hindu families sent their sons and daughters to study in Dhubri, Gauripur, and even Guwahati, and most of them started taking up jobs or became doctors and engineers and never returned to their villages. As a result, many Hindu families in our village started selling off their lands and settling in Dhubri town. Some migrated to Guwahati and even Cooch Behar in neighbouring Bengal. Thus, Muslims started settling down in Ghoshpara. Another tendency we noticed among them was that they always harboured fresh (illegal) migrants from East Pakistan. They all had relatives and known people in that country and constantly encouraged them to come over and helped them settle down,” says Shashi Bhushan.

Both Shashi Bhushan and Shailesh say local Hindu politicians belonging to the Congress tacitly encouraged the illegal migration and helped the illegal migrants obtain ration cards and other documents and get them enrolled in the voters’ list. “We soon realised that the local politicians were doing so to create vote banks. The Muslims would vote en masse for them and, in return for their support, got protection and were also encouraged to bring more of their countrymen (East Pakistanis) in,” said Shashi Bhushan. “These illegal migrants also started various illegal businesses like cross-border smuggling of cattle, foodgrains, and other stuff, and criminal activities slowly increased,” said Shailesh, whose two sons are engaged in petty trades and vocations in Dhubri town.

Goalpara (of which Dhubri was a part) and the whole of Assam (as well as neighbouring Bengal) witnessed a massive influx of refugees from East Pakistan in 1970-71 (prior to and during the Bangladesh war). A large section of them were Muslims who never returned to newly formed Bangladesh, and changed the demography of Goalpara, as well as many other parts of Assam, forever. Ghoshpara bore the brunt of this fresh influx in a way none of its inhabitants could ever imagine.

As Muslim migrants became numerically strong and inched close to becoming a majority in areas around Ghoshpara, the Hindus in the village started feeling the pinch. “Frequent quarrels and brawls between them (the Muslim migrants) and the men from our village started breaking out. They became aggressive and would pick up quarrels over trifles. Then they started targeting young girls of our village, teasing them, passing lewd remarks, and taunting them. They started objecting to our blowing of conch shells and beating of drums during the daily pujas at the village Kali temple and during other religious festivities. There was a particular Urdu-speaking Maulana who came sometime in 1977 or 1978 and took over the mosque outside our village. By that time, about 25 Muslim families had become part of Ghoshpara, and they set up a mosque inside the village. We objected and there was tension, but the local Congress politicians, and the administration at their behest, supported them,” recalled Shashi Bhushan.

The new mosque changed everything, says Shailesh. “Muslims from areas around our village would come to the mosque in large numbers every day. Minor clashes with the Hindu residents of Ghoshpara became almost a daily occurrence. Many Hindu families had their sons and able-bodied young men studying or working elsewhere and could not put up a robust resistance. The Muslim migrants started getting the upper hand and we became second-class citizens in the land of our own ancestors. We found it difficult to live amongst them, more so since they started slaughtering cows on the outskirts of our village. They would pass derisive remarks against us, and during the daily rituals at our temple, they would start blaring sermons from the loudspeaker of the mosque. But it was when they started targeting our womenfolk and girls that we decided we had had enough. Lodging complaints with the police didn’t help since the administration always sided with them and told us to ‘compromise’. We were even warned against complaining against the Muslims too much because that would destroy ‘communal harmony’. We were helpless,” said Shailesh.

The Hindus started selling their lands to Muslims, often at lower-than-market prices, and migrating to Dhubri town and other places. By 1990, there were only three families left in the village. One of them was Shailesh’s. “My family at that time comprised my elderly parents, an elder sister who was a spinster, my wife, and two sons and a daughter. My two elder brothers had already sold their lands and houses and moved away to Dhubri. One night in the spring of 1990, two of my cows were stolen. A few months later, standing paddy crops in a part of my 10 bigha farmland were stolen. Theft of vegetables from my farm became a routine occurrence. And later that year, another cow of mine died from poisoning. The last straw was when some young Muslim men molested my daughter and attempted to abduct her. I rushed to the police, but they were of no help. It was then that I decided we could not longer stay in Ghoshpara. In early 1991, we sold off everything at a very low price—the Muslims knew we were desperate to sell and go away and so took advantage of that—and bought a small house in Dhubri, where we stay now,” said Shashi.

The last family—that of Kantilal Ghosh, comprising his widowed mother, a brother, wife, and two sons—braved on for another year. Kantilal was also in charge of the local Kali temple, but by then only a daily puja would be conducted perfunctorily and without the ringing of bells or blowing conch shells since the Muslims deemed it ‘haram’. Kantilal was very attached to the temple that his grandfather, a prosperous farmer, had helped build.

In the aftermath of the Babri Masjid demolition in December 1992, communal riots broke out in Dhubri. The Muslims of Ghoshpara attacked Kantilal’s house, and the family could escape only due to the timely intervention of the police, who escorted them away to the safety of Dhubri town. Their house was torched and their lands taken over forcibly. The temple was desecrated, and no puja was ever held there since then. There are no Hindus left there to conduct pujas. And the Muslim residents changed the name of the village to Gaspara since no Ghosh remained there.

But this is not the story of this one village alone. There are many such villages in Assam and neighbouring Bengal that have been cleansed of Hindus by illegal migrants from East Pakistan and Bangladesh. And the process continues!