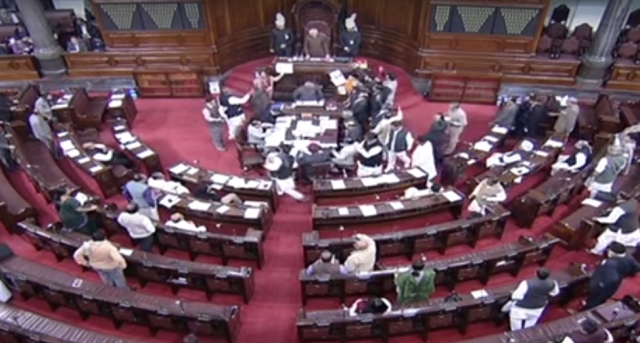 The Rajya Sabha, like the once hereditary House of Lords, was probably intended to be filled, not with our erstwhile kings and princes, but with wise grey eminences.

Maharajahs, rajahs, princes/nawabs/begums/emirs/akhonds etc., in our neck of the woods, were discredited, unfairly, after our post-WWII independence. This, for perforce siding with the British to keep their nominally independent ‘princely states’ from being annexed into the Raj.

They were however annexed promptly into the Union of India when the British left and abandoned them to their fate. And the Indian royals, being neither democratic nor a Nehru pleasing Fabian/Laskian, were left with the choice of joining electoral politics or fading into oblivion. There was going to be no free berth into the Rajya Sabha.

This circumstance, quite unlike the hereditary peers of Great Britain who survived both being decimated in WWI, impoverishment in WWII, the loss of some of their lands, with the proverbial onslaught of death and taxes.

But, over time the Labour Party chipped away at them while in power, and now the Lords are only lifetime peers, and not hereditary ones, with no power to block legislation passed by the House of Commons.

Of course, though the Rajya Sabha vaguely echoes the House of Lords, in India, an incumbent is indirectly elected or nominated for a five-year term whenever a seat falls vacant. He or she may come from any field of endeavour and be nominated or indirectly elected in recognition for distinguished achievement. And sometimes for being an old political war horse, that loses a Lok Sabha election, or cannot, in fact, win one, but is seen to be someone who needs to be provided a berth nevertheless. Sometimes this person can even be the prime minister or the finance minister of the realm.

The original idea, however, was to benefit the lower house with individual and collective insights in legislative matters that they may have overlooked. And it was to do so, more objectively, in a less political manner than the elected lower house, but with a greater emphasis on what is good for the nation.

The Rajya Sabha was meant to offer sage counsel and give pause to the legislative doings of a brute majority government, or even a fractious push-me-pull-you coalition.

Instead, circa 2015, and for some unquiet years in the recent past, it has become a wasteful impediment to legislative progress. It is now renowned for its subversion of parliamentary etiquette, careless of the waste and expense of public resources while conducting what appears to be a boorish slugfest.

Not that the Lok Sabha is any slouch in this department either, raising the bogey of the parliamentary system itself coming under strain at present.

This even as the Election Commission does an ever better job of conducting free and fair elections, both to the centre and the states. It is distinguished for holding the most extensive elections across the length and breadth of the country, involving the greatest number of voters in the world.

But the indirectly elected and nominated members of the Rajya Sabha have particularly, glaringly, and repeatedly, subverted the original intent of the constitutional fathers of late. It is now a place for the opposition to engineer bloody-minded blockages, orchestrate disruption, shout slogans, make strange noises, and indulge in name-calling. If there are no fisticuffs, tearing of clothes, throwing of furniture, shoes, microphones, stands, as has been done in certain state assemblies already, it seems to be only a matter of time.

But what is rare is the discussion, debate, and voting it was set up for. And this, in the full glare of live TV, beamed by satellite to the nation, plus parts foreign.

Everybody in the Rajya Sabha is now apparently partisan, and not always in the spirit of freedom of expression or the workings of democracy.

It would, of course, have been just as bad in the Lok Sabha as well, if not for the government’s absolute majority, but there too, the rump of opposition figures rule the roost. They make an irresponsible din till the house is adjourned with the Speaker there, this time, appointed by the government in power, unable, or unwilling, to take punitive measures to enforce discipline. Meanwhile, the nation loses crores for every day the parliament is in session.

At the end of its logical tether, credence is given in some quarters to reports that some Vastu experts rue the day the British created a Chamber of Princes that was round. Because, it is this self-same round building that independent India converted into its parliament. Round buildings in Vastu Shashtra symbolise infinity and death/the afterlife and do not make for the practicality and good sense a rectangular parliament might have imparted.

Meanwhile, parliamentarians from other countries, students from swish colleges abroad, visiting royalty, troops of monks, military generals, populist dictators, communist bosses, other exotic visitors, come and watch the functioning of the biggest democracy on earth run its parliament in session. They must be carrying away some very strange impressions. If they happen to hit upon a decorous day, it is quite by accident.

Biju Janata Dal (BJD) MP ‘Jay’ Panda from Odisha has been conducting a quiet campaign suggesting that we need to clip the Rajya Sabha’s wings. He cites many precedents of countries that have successfully curtailed the powers of the ‘unelected’ upper house, and details ongoing efforts in other countries which have realised how pesky the upper houses can be.

Either, says Panda, it should be legitimised by being directly elected by the people just like the Lok Sabha, or its ability to block should be limited, say to a year. But if after that, the Lok Sabha still wants to pass a particular piece of legislation, the Rajya Sabha should not be able to stop it.

This is similar to the president of India returning something for further consideration, up to three times, but having to affix his signature to it after that, if the government of the day persists with its modified or original form.

Curiously, not much of a chorus has developed from Jay Panda’s lead, in the media, amongst fellow politicos, or in civil society. One pink paper did write an editorial in support, but that is more or less it so far. The edit piece writers are content to rue the non-functioning of parliament but do not call for steps to reform it. It is suggested this is because they do not want to criticise the Congress position in favour of disrupting Parliament to pressurise the government.

Panda has been served with a privilege motion for writing his opinion on the matter and giving interviews on it too. The opposition in the Rajya Sabha does not want its powers curtailed, and the government of the day is not joining issue against it either.

Panda meanwhile is on his way to being censured or disciplined for his enlightened views, and nobody is doing anything about it.