The Wave That Few Saw: How Modi Got The Country To Vote Against Lutyens Delhi’s Bogus Idea of India 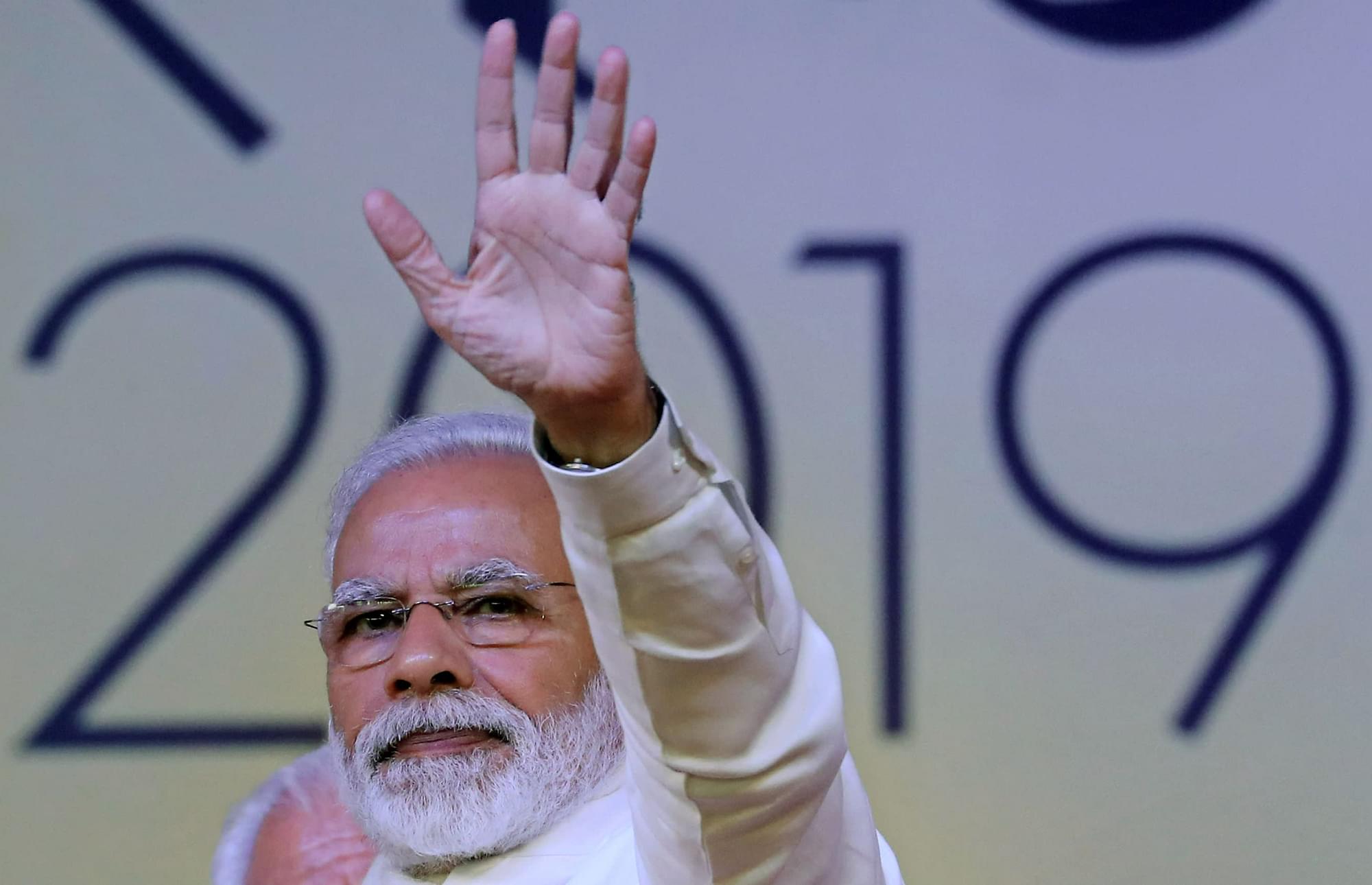 The national sweep that the Bharatiya Janata Party (BJP)-led National Democratic Alliance (NDA) is headed for emphatically reinforces the reality that in Hindu-majority India, you cannot seriously hope to win elections by being Hinduphobic or minoritarian. You can have development, you can try to divide the country on the basis of caste, religion or language, but Mandate 2019 shows that whenever this process goes too far, the silent Hindu vote will rise in anger.

The Modi Wave of 2019 has been bigger than the one in 2014, despite weak economic performance, because it has consolidated the Hindu vote in many parts of the country in order to defeat anti-Hindu politics. It is a decisive victory against the minoritarian Idea of India plugged by the Lutyens elite.

In state after state, despite the reality that the BJP had maxed out its seat-count in 2019, the party’s net losses were minimal, and the gains in new territories significant, thanks largely to a Hindu vote consolidation. If the BJP lost ground in Uttar Pradesh, its losses were so marginal in the rest of the Hindi belt and western India – Madhya Pradesh, Rajasthan, Chhattisgarh – that the gains in new territories more than made up for them. Moreover, the NDA maintained its 100 per cent record in Gujarat, and the Sena-BJP jugalbandi bettered its record in Maharashtra.

The gains the BJP has made in West Bengal were largely the result of Mamata Banerjee’s minoritarian policies, which led to a Hindu counter-consolidation against her in some seats. This explains why she was getting more and more hysterical towards the end of the campaign, one of the most violent in recent memory.

Even in a state like Kerala, where the BJP did not make progress, the complete decimation of the Left Front, the erstwhile repository of the Hindu vote, speaks volumes. The Left has lost everywhere – West Bengal, Tripura and now Kerala – largely because it chose to position itself as a “secular” party at odds with its Hindu base everywhere. Post-independence, Congress was the party of minorities, and this made Hindus swing towards the Left even though the latter’s narrative was about class polarisation. The BJP’s rise in the three formerly Left states shows that if a more authentic and credible Hindu party surfaces, they may shift their allegiances.

The BJP has gained because the Modi government has chosen not to follow overtly pro-business policies. In fact, the Prime Minister has regularly focused on pro-poor policies, sometimes even to the detriment of business. The BJP’s shift towards Centre-Left positioning means it is now the party bang in the middle of the Indian polity. It was, and remains, the primary pole of Indian politics.

First, the BJP is no longer a Hindu-Hindu party, kept out by eastern and southern India. This was never true since the BJP has ruled Karnataka long before Modi came on the scene. But after the advent of Modi, the party has spread east with a vengeance, taking over many states in the North-East, and now becoming a strong alternative to the Trinamool Congress in West Bengal and Naveen Patnaik’s Biju Janata Dal in Odisha. The Left’s defeat in Kerala portends the rise of the BJP in this state in future, and its ability to gain seats in Telangana just months after being trounced by the Telangana Rashtra Samiti in the assembly elections shows that the BJP footprint is spreading in the south too.

Second, the Left faces an existential crisis, and it is rapidly losing the Hindu vote that kept it in contention in three states. If it wants to regain its past form, it has to stop being a Hinduphobic party. Frequently taking positions that irritate the majority community – as it did on Sabarimala – makes no sense. It has cut the branch it was sitting on. Its position on class no longer holds, for today all parties have moved towards populism and pro-poor postures.

Three, unprincipled coalitions of arithmetic work only upto a point. In Uttar Pradesh, Bihar, Jharkhand and Karnataka, the anti-Modi mahagathbandhans were trumped by chemistry-based coalition led by Narendra Modi. Another reality: if the coalition is based on some castes and communities, there is usually a counter-consolidation based on other castes and communities. In Uttar Pradesh, the Dalit, Muslim, Yadav and Jat coalition fizzled as the upper castes, non-Yadav OBCs, and non-Jatav Dalits voted overwhelmingly in favour of the NDA. The minor splinter parties that left the NDA in a huff have been left on the wayside.

Four, the Congress dynasty is past its sell-by date. It does not pull in any additional vote on its own, but the English language media and the opposition parties have been unwilling to tell Rahul Gandhi the truth – that the emperor has no clothes. The party no longer has a reason to exist under the Gandhis, after failing to significantly better its 2014 performance. The additional seats over the 44 in won in 2014 are entirely due to the DMK in Tamil Nadu, and the implosion of the Left in Kerala.

Five, it is mistake to rubbish nationalism as a force in Indian politics. This election gave the lie to the outlandish statements of the tukde-tukde gang at JNU, which were defended by the anti-Modi media and opposition as the right to free speech. Few Indians want to see free speech taken to such lengths at this stage in India’s rise on the world stage. Breaking India is not in anyone’s interests, including the opposition parties.

Six, the BJP has been labelled as the arrogant party, but experience proves that, when required, it can stoop to conquer. It has been more realistic about the need for allies than the rest of its competition, even though it did not treat its allies as equals in the 2014-18 period. When faced with the possibility of its allies turning rogue, especially the Shiv Sena, the BJP not only massaged the egos of Sena chief Uddhav Thackeray, but also gave Nitish Kumar and Ram Vilas Paswan a larger share of the seats in Bihar than seemed reasonable. Contrast this with how Mayawati and Akhilesh Yadav sidelined the Congress in Uttar Pradesh, and how the Congress and JD (Secular) have been bickering even though both were facing an existential crisis in Karnataka. Clearly, the BJP knows a bit more about keeping partners in good humour than the opposition.

Looking ahead, the message for the BJP itself is obvious as it prepares to deliver on its promises of banishing poverty by 2022.

First, it must focus on getting BJP state governments and governments led by allies to agree to a common economic programme so that Centre and states are on the same page and work towards the same goals. In the first round, what Modi did in Delhi did not filter through even to its own state governments. Delivery on promises needs the BJP to carry its state leaders and coalition partners along. This means Modi must keep his partners happy even when having its own single-party majority. The coalition partners are needed for pushing legislation through the Rajya Sabha.

Second, the focus of Modi 2.0 (or NDA 3.0) must be on economics – and this boils down to jobs, jobs, jobs. Even farm distress cannot be alleviated without creating enough jobs in the non-farm sector. Clearly, reforms in the labour, land and agriculture markets must be prioritised. In 2024, a buzzing economy will give the NDA the edge, regardless of whether Modi seeks a third term, or is happy to hand the baton over to someone else.

Third, the BJP, having made inroads in Bengal and Odisha, must focus its political vision towards understanding the south, especially Tamil Nadu. Hindi-belt logic may not work fully here, though the Hindu vote is ready to be awakened within the context of a broader southern sensibility. The BJP is the party best placed to bridge the north-south divide by becoming the first party after the post-independence Congress to develop a footprint in every nook and cranny of India.

Fourth, the BJP needs to reach out to Muslims – not with the Congress-style identity politics, but with a genuine hand of help for economic and social progress. As a Hindu-oriented party, the BJP cannot shift focus from defending the majority community’s interests to minority appeasement – if it does that, it will see a diminishing future – but this does not mean denying Muslims a fair share of the national pie and representation. The BJP would do well to create a formal structure for dialogue between Hindus and Muslims, so that the contradictions that keep the two communities suspicious of one another can be ironed out without compromising the interests of any community.

The BJP has won the first battle by defeating the Idea of India that is purely driven by minoritarian politics; it needs to develop a new and more inclusive Idea of India, based on Dharmic sensibilities that does not “other” the minorities. The old Idea of “secular” India, as enunciated by the rootless Lutyens elite, was based on making the majority community feel small, has to die. A resurgent India cannot be built without a confident Hindu core. That is the ultimate message of the 2019 elections.