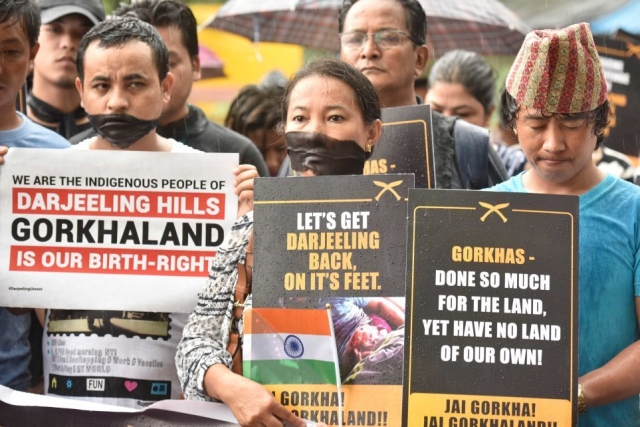 Supporters of Gorkhaland at a rally in Mumbai, India. (Anshuman Poyrekar/Hindustan Times via GettyImages)

The latest fiasco over handling of the emotive and contentious ‘Gorkhaland’ (the demand for a separate state carved out of the Darjeeling Hills and Dooars areas of North Bengal) issue by the Union Ministry of Home Affairs (MHA) should serve as a timely warning to the Bharatiya Janata Party (BJP) in Bengal.

The MHA had issued invitations for tripartite talks (with the Bengal government and representatives of the statehood movement) on ‘Gorkhaland’ last week.

But that alarmed the state BJP which felt it would lose ground in the rest of Bengal if it is perceived as supporting or facilitating the statehood demand.

As soon as news spread about the MHA’s invite for talks to discuss ‘Gorkhaland’, the Left parties and the Congress started accusing the BJP of refuelling the statehood demand.

Before Trinamool could also make this into a major issue, the state unit of the BJP reportedly alerted the party’s central leadership.

The MHA issued a corrigendum earlier this week that the meeting would discuss “issues related to the Gorkha Territorial Administration (GTA)”.

The GTA, a semi-autonomous body with limited financial and administrative powers, was awarded to the people of Darjeeling Hills as a halfway measure to a separate state.

But the GTA, which has been without an elected body for the last three years, failed to meet the aspirations of the people of the Hills. Hence, the Gorkhas have rejected the GTA and have grown tired of such half-way measures.

One the other hand, Bengalis cutting across party lines are vehemently opposed to the statehood demand which they view as another ‘partition of Bengal’.

The BJP finds itself in an unenviable position here. The party had ambiguously supported the Gorkhas’ demand, but couched it carefully as one for a ‘permanent political solution to the Gorkhaland issue’.

The BJP has reaped political dividends from its support to the Gorkhaland cause with the Darjeeling Lok Sabha constituency electing BJP candidates for three times in a row (Jaswant Singh in 2009, S.S.Ahluwalia in 2014 and Raju Bista in 2019).

Tamang is considered to be close to Trinamool, especially its chief Mamata Banerjee. The latter is widely believed to have engineered a split in the GJM to weaken the movement for a separate state that the GJM was spearheading in 2017.

The BJP’s stand on Gorkhaland helped it win not only the Darjeeling Lok Sabha seat, but also a few other seats in northern Bengal in the 2019 Lok Sabha elections.

The Gorkhas form a significant chunk of the electorate in at least three other Lok Sabha seats, and in a total of 12 Assembly seats, in the Dooars area of northern Bengal.

But the lack of any movement on its promise to facilitate a ‘permanent political solution’ to the ‘Gorkhaland’ issue can easily set in motion the process of alienating the Gorkhas from the BJP.

A muddled approach to the issue and its mishandling, as was evident in the recent u-turn by the MHA, only serves to trigger such alienation.

The Gorkha National Liberation Front (GNLF), an ally of the BJP in the Hills, was quick to criticise the MHA’s about-turn.

The MHA’s handling of the issue also lent credence to the oft-repeated charge by the Binay Tamang faction of the GJM that the BJP is merely playing with the sentiments of the people of the Hills.

Darjeeling MLA Neeraj Zimba threatened to resign as an MLA and from the BJP, on Tuesday, if the MHA does not work towards finding a ‘permanent political solution’ as the Gorkhas have been promised.

This threat should not be disregarded by the BJP since it reflects the sense of disquiet and disappointment among the Gorkhas with the saffron party.

Many prominent Gorkhas who spoke to Swarajya said they were disappointed with the BJP. “We have supported the BJP, but it feels like we are being taken for granted. There has been no movement on even setting in motion the process of finding a permanent political solution to the Gorkhaland issue that the BJP had promised,” said lawyer Prashant Lama.

The BJP finds itself in an unenviable situation: any overt support for ‘Gorkhaland’ will cost it support in the rest of Bengal, while not moving forward on the issue will cost it the goodwill of the Gorkhas.

But it owes a moral obligation to the Gorkhas to facilitate a ‘permanent political solution’ that it had promised to them.

Trying to bury or ignore the issue and go back on its promise due to political compulsions will cost the BJP its credibility not only among the Gorkhas, but also the people of Bengal.

There is also the geo-strategic angle to this. The Darjeeling Hills and the areas in the Dooars where the Gorkhas are present in significant numbers form part of the vulnerable ‘chicken’s neck’ corridor that links Northeast with the rest of the country.

A sense of intense disquiet among the Gorkhas in this strategic area could easily be exploited by China for its nefarious ends.

Northern Bengal is a smorgasbord of ethnicities: the tribals in the tea gardens of the Dooars, the Gorkhas in the Hills and the Dooars, the Rajbongshis in Dooars, Bengali Muslim and Hindu settlers from erstwhile East Pakistan and Bangladesh, and a large Hindi-speaking community comprising Biharis, Marwaris and people from Uttar Pradesh.

Unrest in this region can act as a spark in a powder-keg. Hence, the BJP needs to play its cards with a lot of finesse in order to keep Gorkhas and all other communities happy, and also to shore its own political credibility.

The tightrope walking that this entails is not easy, but not impossible either. The solution perhaps lies in doing the right thing after winning the trust and confidence of all communities.