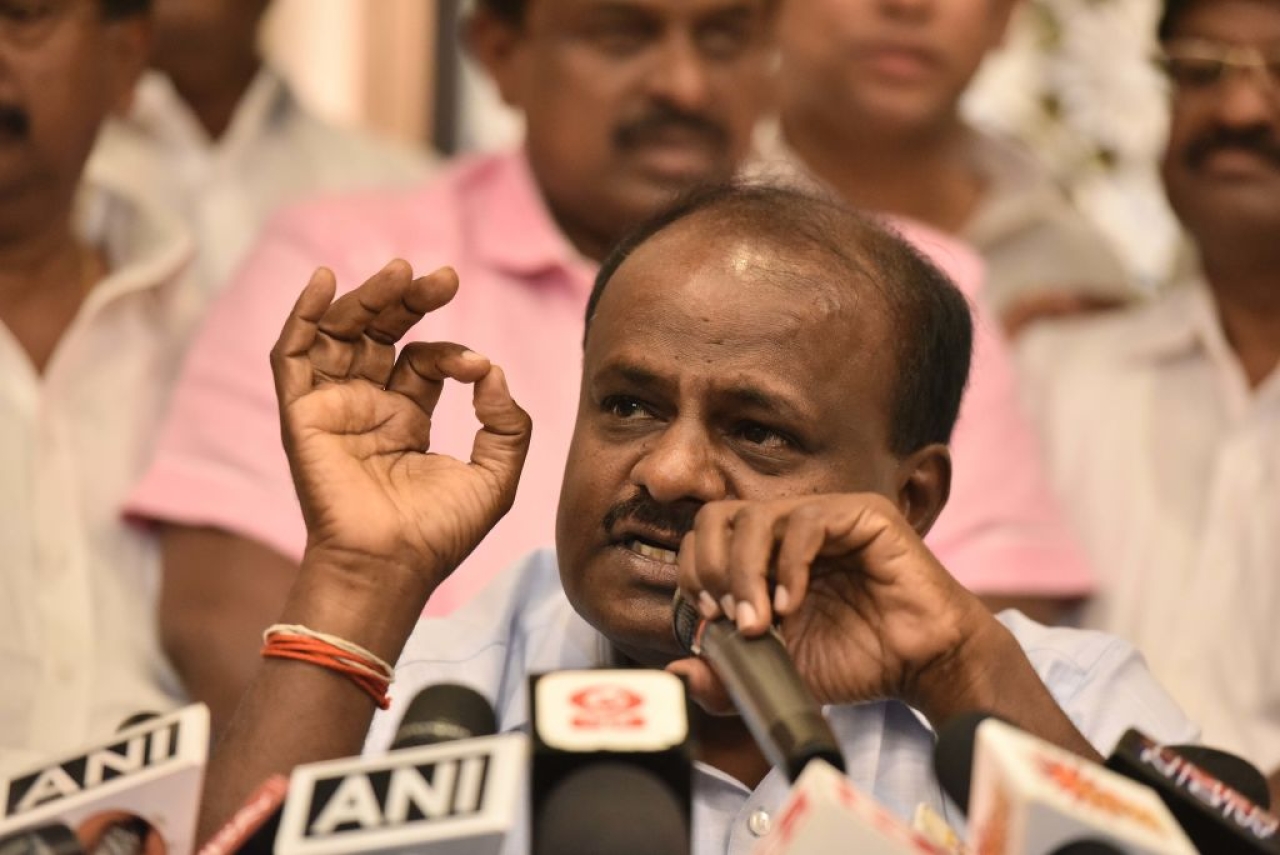 A majority of the political parties in Tamil Nadu has welcomed Karnataka Governor Vajubhai Vala’s invitation to Janata Dal (Secular) or JD(S) leader H D Kumaraswamy to form a government in the state. The parties have also been unreserved in hailing the fall of the Bharatiya Janata Party (BJP) government in Karnataka within two days after failing to muster a simple majority as “victory for democracy”. In their eagerness to oppose the BJP and Prime Minister Narendra Modi, these parties have displayed ignorance of the problems Tamil Nadu could face if Kumaraswamy becomes the Chief Minister.

For one, Tamil Nadu will surely have problems in getting its due share of water from the Cauvery river.

There are three things noteworthy to show how Kumaraswamy and his JD(S) will be a different customer to deal with on the Cauvery issue.

One, Kumaraswamy’s father, former prime minister H D Deve Gowda, who was also Karnataka’s chief minister, hasn’t been sympathetic to Tamil Nadu’s cause either. A look back at the history of Cauvery dispute will tell us how Deve Gowda almost brought the then prime minister P V Narasimha Rao to his knees to release Cauvery water in 1995. With monsoon failing that year, Tamil Nadu approached the Supreme Court seeking 30,000 million cubic (TMC) feet of water. The Supreme Court didn’t entertain the petition, asking the state to approach the Cauvery Water Dispute Tribunal, which ordered Karnataka to release 11 TMC of water. Deve Gowda, then the chief minister, refused to release even a drop of water. It then required all the persuasive skills of Rao to make him agree to release six TMC feet of water.

If this is one part of Deve Gowda’s history, political parties in Tamil Nadu, especially the Dravida Munnetra Kazhagam (DMK), should remember what happened the subsequent year. The undivided Janata Dal was an alliance partner of the DMK. Deve Gowda and another former Karnataka chief minister, S R Bommai, were at the helm of the party affairs. Deve Gowda, in particular, was keen on the Janata Dal having an alliance with the All-India Anna Dravida Munnetra Kazhagam (AIADMK), cutting off ties with the DMK. The AIADMK was then caught in controversies over corruption, but Deve Gowda, overruling allegations of his alliance partner M Karunanidhi of DMK, gave a clean chit to AIADMK leader and then Tamil Nadu chief minister J Jayalalithaa. It resulted in Janata Dal going it alone in 1996 Tamil Nadu assembly elections along with the Communist Party of India (Marxist) and Marumalarchi DMK, and drawing a blank from the 233 seats the alliance contested.

Second is Kumaraswamy’s own history with the issue. In 2007, when the Cauvery water tribunal gave its final verdict, Kumaraswamy was Karnataka chief minister. He called for a state-sponsored Karnataka bandh on 12 February against the order. His government also challenged the final verdict in the Supreme Court, which pruned Tamil Nadu’s share of Cauvery water by another 15 TMC feet.

Third, in its manifesto for the just-concluded assembly elections in Karnataka, the JD(S), calling the notification of Cauvery River Water Tribunal Award a death blow to farmers of the Cauvery basin, said that the party would ensure that injustice meted out to farmers will be rectified. In fact, the manifesto blames the Congress members of Parliament for their inaction in taking up Karnataka’s cause. The party also said that it will pursue power projects in the Cauvery basin, though in consultation with the Tamil Nadu government.

On Friday (18 May), Karnataka objected to the proposed Cauvery water board in the Supreme Court, which brushed it aside while ordering the setting up of the board.

In contrast, when B S Yeddyurappa was the chief minister, Karnataka enjoyed good relations with Tamil Nadu. Indeed, there was bonhomie between him and then Tamil Nadu chief minister, M Karunanidhi, who was fondly called periyanna (elder brother) by Yeddyurappa. In 2009, the statue of Kannada poet Sarvajna was unveiled in Ayanavaram in Chennai, while a statue of Tamil Saint Thiruvalluvar was unveiled in Bangalore (Bengaluru).

Addressing the media during the unveiling of Sarvajna’s statue, Yeddyurappa, referring to Cauvery dispute between the two states, said: “difference of opinion is also quite natural. But we should be sagacious enough to devise means to resolve them. Mutual trust and discussion facilitate such a course of action”.

Will any Tamil Nadu politician get Kumaraswamy to come out with a similar statement? The survival of JD(S) depends to a great extent on farmers who rely on Cauvery water. And the party has always preferred politics over solutions on the issue, including indulging in violence, as it did in September 2016. It is unlikely that the JD(S), Deve Gowda and his family will make a climbdown.

Will they at least allow the Cauvery water board to be set up in Bengaluru as proposed by the central government? Watch out the events unfolding.

Get Swarajya in your inbox everyday. Subscribe here.
Tags:
780 Shares