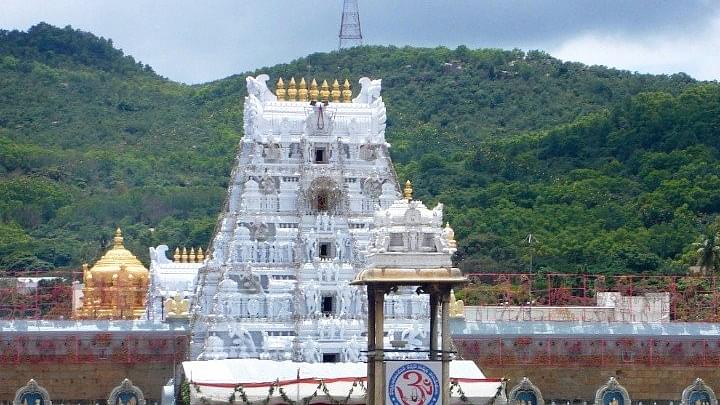 Outrage erupted at the Tirumala Tirupati Devasthanams(TTD), the autonomous body which manages the famous Tirupati Balaji temple when its head archaka(priest) AV Ramana Dikshitulu made stunning allegations of corruption and impropriety in the administration of the temple. The head priest alleged that priceless jewels, including those donated by the Vijayanagara king Krishnadevaraya, the Mysore Maharajas, the Chola and Pallava dynasties were missing. Damningly, he alleged that a rare pink diamond donated by the Mysore Maharaja, which the administration said was broken, has been found being auctioned at a Sotheby’s sale. He also accused the TTD of violating the strictures of the agama shastras (ritual prescriptive texts) that govern the functioning of the Tirupati temple.

What happened next illustrates everything that is wrong with Hindu Temples being under state control. Instead of taking the allegations seriously, the administration hastily convened a meeting of the board of trustees and served retirement orders to Ramana Dikshitulu and three other head priests. This was done was by fixing the “retirement age” for temple priests as 65 years. Sources say that the decision was influenced by the State Endowment Department, which administers temples in Andhra Pradesh.

This is not the first time that Ramana Dikshitulu and the TTD administration have locked horns. A few months ago the administration served a notice to Ramana Dikshitulu for bringing his son and grandson into garbha graha (sanctum sanctorum) of the temple, which as hereditary priests they were entitled to do. He has also been under scrutiny for being close to the former chief minister YS Rajashekar Reddy, performing homas ( vedic ceremonial fire rituals) for him on multiple occasions.

While this may look like a relatively straightforward clash between the temple priests and the administration, with a dash of politics, the issue is far more complex. Across states, there have been multiple issues and challenges with the state takeover and administration of Hindu temples. At the root of this is the question of what a temple is and how and by whom should it be administered.

A temple is commonly understood as a place of worship. However, this definition does not do justice to the deeper, more fundamental aspects of temples. At its core, a temple is a consecrated space, where a specific devata (deity) has been enshrined in a Vigraha(idol). The nature of stone used, the form and the mudras (hand gestures)of the Vigraha, the consecration process that is followed, the overall architecture of the temple and the daily puja procedures are all specifically aligned to invoke and sustain the presence of a specific devata. These processes are painstakingly described and governed by the agama shastras, which are considered to be authoritative. Thus in the Hindu worldview, a temple is not merely a place for congregational worship, nor are the idols only symbolic of philosophical meanings. A temple is considered to be the extended body of the Devata. Even in law, the deity is considered to be a legal entity to whom the temple property belongs.

From a social perspective, temples have been centres of learning and spiritual instruction. They were also centres of amazing depictive arts like sculptures and paintings and the performative arts including music and dance forms. Even today, some temples sustain niche art forms like the arayar sevai in Srirangam. They were congregational spaces with grand celebrations which the entire community organised and participated in. Many temples used to sustain water reservoirs, shelter houses for pilgrims, gardens and goshalas (cow shelters). Further, many of them used to be a source of food security, providing annadhana to the needy and pilgrims. In short, they functioned as the social, cultural and spiritual heart of the community.

Given this nature of the temple, the questions of how and by whom it should be administered become relatively straightforward. A temple is to be administered by the community, through representation, according to the specific agama shastra adopted by it. The role of the state was traditionally restricted to ensuring security and occasionally providing grants.

Today, however, many states temples like Tirupati are under the administrative control of state governments. The trailblazer in this regard is Tamil Nadu which passed the Hindu Religious and Charitable Endowments Act in 1951, which became a template for many other states as well. The reasoning behind state takeover of Hindu temples rests on the premise that there are “religious” and “secular” parts to temple administration. While the government cannot intervene in the “religious” dimension, it has the authority to administer the “secular” dimensions of temple administration. This clearly goes against the Hindu worldview which sees the entire temple and its functioning as sacred and does not recognise the arbitrary dichotomy of “sacred” and “secular” functions of a temple.

The temptation for states to control temples is obvious: money and power. There is immense scope for diversion of funds. Some governments have gone so far as to seek trust funds for building airports and bridging budget deficits. The standard template for state takeover includes the allegation of corruption and mismanagement by trustees or purohits (priests), superseding the trust for “streamlining administration” and appointing government nominees to control the institution.

The worst offender by far has been Tamil Nadu, with over 36,000 temples and 50 plus religious mathas ( Hindu monasteries) under state government control. The malaise spread rapidly with former chief minister N T Rama Rao taking over the Tirumala trusts, followed by other states taking control of wealthy temple trusts including Vaishno Devi and Siddhi Vinayak among others.

The vast temple land endowments are either officially diverted for state purposes, leased out or sold for paltry sums or worse, allowed to be encroached upon. A recent Madras High Court judgement rebuked the state for allowing over 50,000 acres of temple land endowments to be lost to encroachment. Temple land endowments in Tamil Nadu had shrunk from 5.25 lakh acres to 4.78 lakh acres due to encroachments. For 4.78 lakh acres, the planned annual revenue collection was a paltry 304 crores, while by any reasonable measure, the figure should be in thousands of crores. Of this, less than 36 crores have been collected. Further, large portions of the temple donations are syphoned off to the state treasury as administrative expenditures and management fees. In many cases, the administrative expenditure far outweighs the religious expenditure. Temples have been “renovated” without consulting either agamic or archaeological experts, resulting in agama violations and loss of ancient inscriptions, priceless murals etc. Rampant corruption and appointments as political favours have further crippled temples in performing their role as social, cultural and spiritual centres of the Hindu community.

This kind of arbitrary state behaviour is not legitimated either by tradition or by the secular nature of the state as mandated by the constitution. The allegedly secular state does not interfere in the management of the religious endowments of any other faith. Yet, for decades, it has been increasingly involved in the arbitrary takeover and mismanagement of Hindu temples. It is high time that we ensure that temples are freed from state control and the endemic corruption and politicising that comes along with it.

Ultimately, the issue at Tirupati is far more than a mere tussle between the priests and the government appointed administration. Serious allegations of financial irregularities, political interference, patronage seeking and arbitrary decision making that haunt Tirupati ultimately flow from the fact that the state government effectively runs the temple. As an immediate step, the accusations demand a thorough, independent, impartial investigation possibly by moving the High Court or the Supreme Court.

On a longer term, legal means like the writ petition filed by Swami Dayananda Saraswati in 2012, challenging the constitutionality of endowments acts of three states - Tamil Nadu, Andhra Pradesh and Puducherry have to be taken forward. This would help resolve the woes of not only Tirupati but of thousands of smaller temples that languish under the tyranny of the state. Only then, can temples once again become the heart of the community’s social, cultural and spiritual life.

Also Read: Great Hypocrisy Of “Secular” Indian State: It Controls Only Temples; We Must Take Them Back