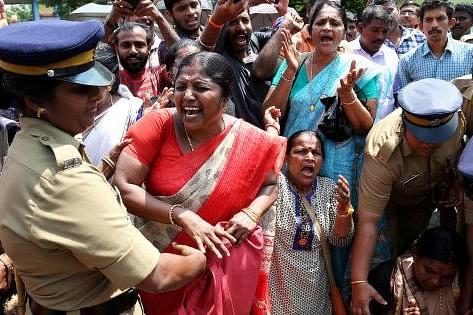 A woman devotee is being detained by a police officer during a protest called by various Hindu organisations in Sabarimala.

What is happening in Sabarimala is a deja vu moment – 1990 for Hindus. On 30 October and 2 November 1990, devotees of Lord Rama were massacred by the police of Mulayam Singh Yadav in one of the holiest of Hindu towns – Ayodhya. Later, their bodies were recovered with sandbags hooked to them from the river Sarayu associated with the memories of Rama. The Rama devotees were unarmed. It was then called the Jallianwallabagh of Nehruvian pseudo-secular state.

Today, after 28 years, it is beginning to get repeated at Sabarimala – the holiest shrine of Lord Ayyappa – who has emerged as a pan-Hindu deity uniting humanity cutting across all barriers of caste, creed, language and Vindhyas. But there is a condition. The tradition associated with the deity does not allow women of reproductive age to visit the temple as the deity is an avowed celibate – a naishtika brahmachari.

Until recently, this exclusion was not considered a discrimination against women. After all, Hindu dharma, as the last standing pagan culture in the world, has a very special feature. Dharma has through millennia evolved gender-specific structural and functional sacred spaces. There is an Attukal Bhagavathy pongala celebration in Kerala, where men are not allowed. At the time of the full moon of Chitra, the first Tamil month Koovagam, a small dusty village in Vizhuppuram district of Tamil Nadu becomes the culmination point for all the gender variants, who alone have special ritual rights. Gender specific or body-specific sacred spaces thus exist throughout India and through all times. These are neither social discrimination nor denial of gender justice.

In the case of Sabarimala judgement, with all due respect to the Supreme Court, there is a dangerous streak of judicial overreach which confuses imposed uniformity with gender justice and goes against the spirit of this land. The confusion, perhaps, arises from the previous experience of judicial intervention in blatant discriminatory practices such as untouchability. However, one wishes, again with all due respect to the learned judges, that they would be culturally and historically sensitive enough to discriminate between a real social evil and a pluralist exclusion in certain sacred spaces.

Of course, such culturally-sensitive abilities for rational discrimination demand on the ground inputs. The Rashtriya Swayamsevak Sangh (RSS) leadership which was also initially confused over the Sabarimala issue, after receiving inputs from its tree-like structure of organisation, realised and changed its stand. One wishes that the Indian judiciary learns from the RSS. After all, judiciary is also a human-run institution and is not above increasing entropy when it becomes closed.

There are elements even in the ruling party, which are obstinate about their stand – refusing to see the Sabarimala issue for what it really is. A former law minister, who made it to the Bharatiya Janata Party (BJP) during the build up of 2014 Narendra Modi wave, had stated that the army and paramilitary forces should be used to implement the Supreme Court order. This man, who had passed himself as an ‘intellectual Kshatriya’, in his earlier iteration in 1992 voiced similar sentiments over the Ramjanmabhoomi issue, that the secular state should employ the army, take over the entire place and hand it over to Muslims.

Even the central cabinet is not immune to such myopia and insensitivity. Maneka Gandhi, who had often displayed rank ignorance about the sound human-animal eco traditions of the land and who was a crypto-supporter of the United Progressive Alliance-sponsored ban on jallikattu, has also shown the same arrogant insensitivity in the case of Sabarimala. Thankfully, Arun Jaitley has voiced his apprehension about the judicial overreach. But one wishes the voices from the Centre become more united and stronger for the Sabarimala cause.

The north of Vindhyas Nehruvian media, right or left, with high decibel or suave narcissist anchors, has shown remarkable cultural illiteracy with respect to the spiritual traditions south of the Vindhyas. This is despite the fact that the south of Vindhyas has preserved the Vedic traditions in more pristine form than the north. Of course, one understands that the south was able to do that only because of the resistance movement that fought the invaders in such a sustained manner for 800 years. But then the north Indian fighters of dharma understood and respected the umbilical cultural connections with south India. Nehruvian education over the decades progressively eroded the cultural literacy which in turn has led to the bizarre situation we are in now. South and north, despite their organic unity, perceive each other as the other.

And into this vacuum of cultural literacy play the Marxists. Marxism has always been deep down a colonial Euro-centric, anti-pagan, and hence in this case, anti-Hindu ideology. It will obsessively side with any attack on Hindu culture and traditions – while at the same time meekly surrendering itself, and gleefully siding with ‘Islamo-Christian’ expansionist monocultures.

What is at stake in Sabarimala is something more vital than a mere temple issue.

Otherwise, the very fact that thousands of ordinary Hindu women from the entire society spontaneously spilling into the streets of Kerala, should have made any judiciary sit back and listen voluntarily. Otherwise, the fact that the first scheduled community priest of Kerala – Yadhukrishnan – voicing his support for the women marching to save the Sabarimala tradition, should have made the media and judiciary realise that this has nothing to do with social justice.

The judges may not realise it but the women on the streets of Kerala are actually rallying to save Indian judiciary from the greatest suicidal plunge it has taken because of its inability to resonate with the heartbeat of the Hindu nation. But the sad truth is that institutions of the Indian state have been increasingly becoming Hinduphobic. Sabarimala movement is the spontaneous response of the Indian nation against this Hindu hatred that is getting institutionalised.

The Indian state needs to exist. We can never let it fail or implode. To not to become a failed state and to not implode, the Indian state in its present form needs the ancient, still living, and more than 5,000-year-old Hindu nation that has withstood thousands of years of ravage. Judiciary, with all due respects to it, has started chopping down the very branch on which it sits. So let us persuade the judiciary to let go of its institutional and elitist ego and see reason.

Let it be clear that the Indian state has to exist for the welfare of more than one billion Indians and without the Hindu nation, the Indian state will cease to exist, and implode. Balkanised India, a long time goal of Marxists and other ‘breaking-India’ forces, will transform every linguistic state into killing fields without Hindu spirituality uniting us – and Sabarimala symbolises it.