Too Little, Very Late: What Is Stalin’s Objective In Saying He Is Not Against Hindus? 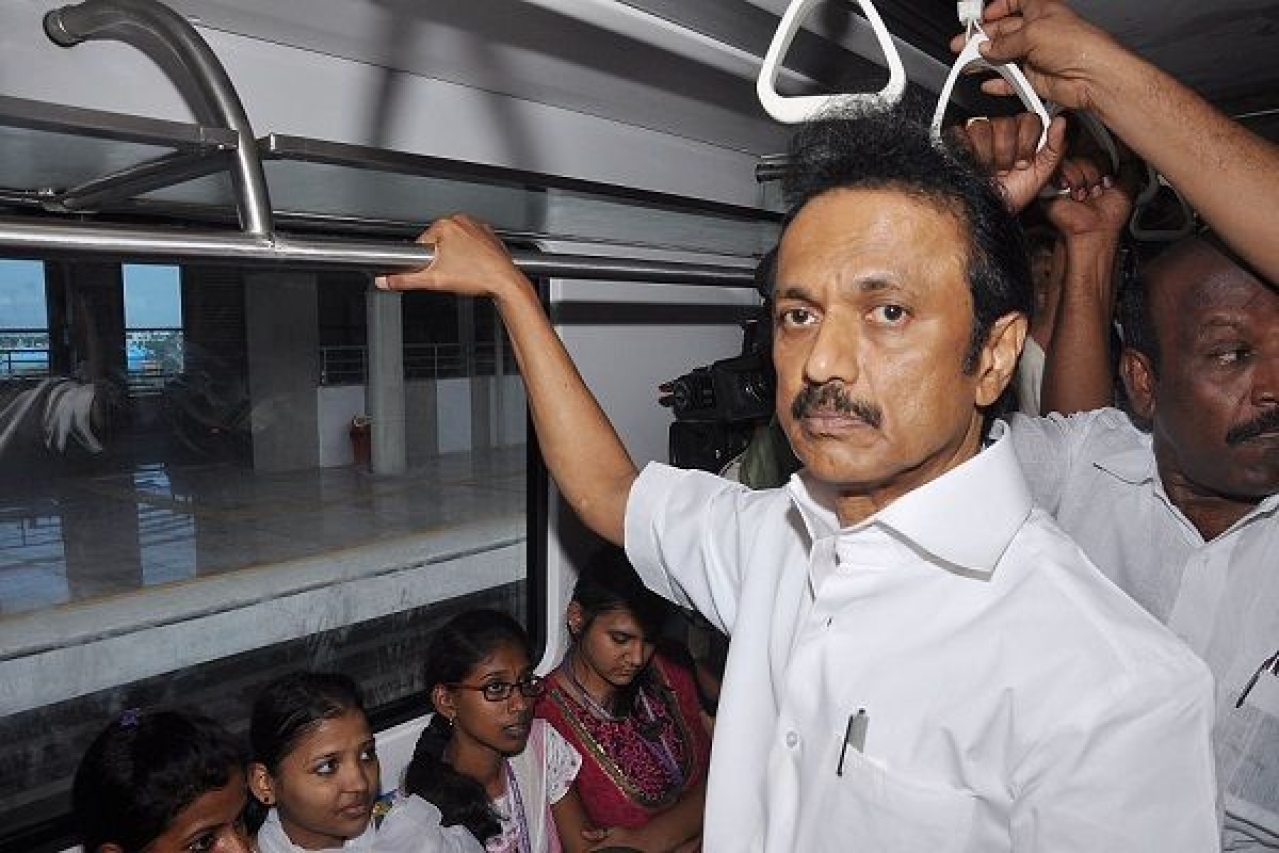 On 1 March, the Dravida Munnetra Kazhagam (DMK) released a video of its President M K Stalin on his birthday saying that his party was not against “any specific individual, community or religion”.

He clarified that he was against fundamentalists, particularly a few elements from north India who were trying to impose a single language on the country.

The statement came after a long silence from the DMK after quite a few videos of Stalin’s speeches against Hindu marriages and other customs (read here) were circulated in the media. Stalin and his party men had chosen to be silent at that time.

In particular, the criticism against DMK leaders, especially the late M Karunanidhi and Stalin, is that they never fail to greet the minorities on the eve of festivals like Ramzan or Christmas, while never bothering to greet the majority population during Hindu festivals.

As the elections to the Lok Sabha draw near, voices against what DMK’s critics call as “anti-Hindu” stand of the party are growing louder. Given these circumstances, Stalin’s statement is significant.

More than the Lok Sabha elections, the DMK seems to be eyeing the by-elections to the 21 Assembly seats that are likely to be held with the Lok Sabha polls. These vacancies have been caused by the disqualification of All India Anna DMK (AIADMK) members of the Tamil Nadu Assembly (MLAs) and death of three members, including former chief minister M Karunanidhi. 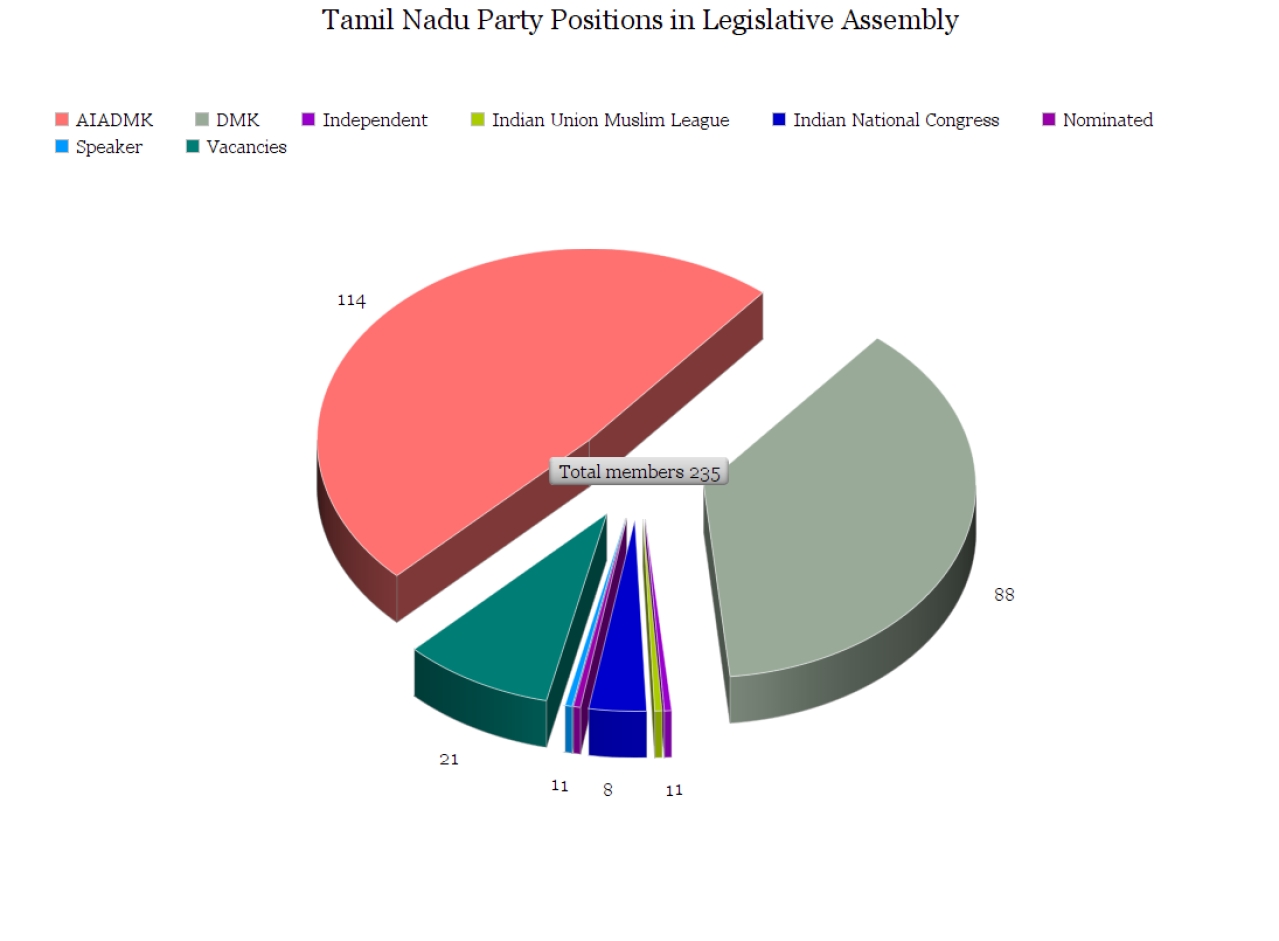 For AIADMK and DMK, trying to wrest as many Assembly seats is crucial to wrest power in the State. Given the fact that the AIADMK has 114 members out of the 235-member assembly, it would look to win at least half a dozen to be in the comfort zone and continue enjoying the majority.

For the DMK, it is crucial to win as many as possible if not all the 21 to try and break the already divided AIADMK. The AIADMK underwent a split in 2016 when TTV Dinakaran, nephew of Sasikala Natarajan who was an aide of the late chief minister and party supremo J Jayalalithaa, split from the party with 18 MLAs.

Later, Dinakaran formed the Amma Makkal Munnetra Kazhagam. The 18 MLAs were disqualified by the Speaker and by-elections to the constituencies represented by them are due along with Lok Sabha elections. (Sasikala is serving a prison sentence for amassing property more than the known sources of her income).

It is in view of the Assembly by-elections that both AIADMK and DMK have been accommodating of their alliance partners for the Lok Sabh polls.On its own, it is likely that the AIADMK could contest 25 seats of the 39 seats at stake for the Lok Sabha elections.

The NDA could give a couple of seats to Desiya Murpokku Dravida Kazhagam (DMDK, led by Tamil actor Vijayakanth) to contest from and in that case, the AIADMK might give up a couple of more seats.

Out of 39 seats in Tamil Nadu, the DMK will be contesting only 20, while giving away nine to the Congress, which also gets to fight from the lone Puducherry seat. Alliance partners like the Communist Party of India, Communist Party of India- Marxist and Viduthalai Chiruthaigal Katchi will contest from two seats each and others small parties like Marumalarchi DMK and Indian Union Muslim League will be in fray from one seat each.

AMMK and actor Kamal Hassan’s Makkal Neidhi Maiam will contest without any major alliance. One has to see what dent the major alliances will suffer to their vote bank, particularly due to the AMMK presence in the elections. 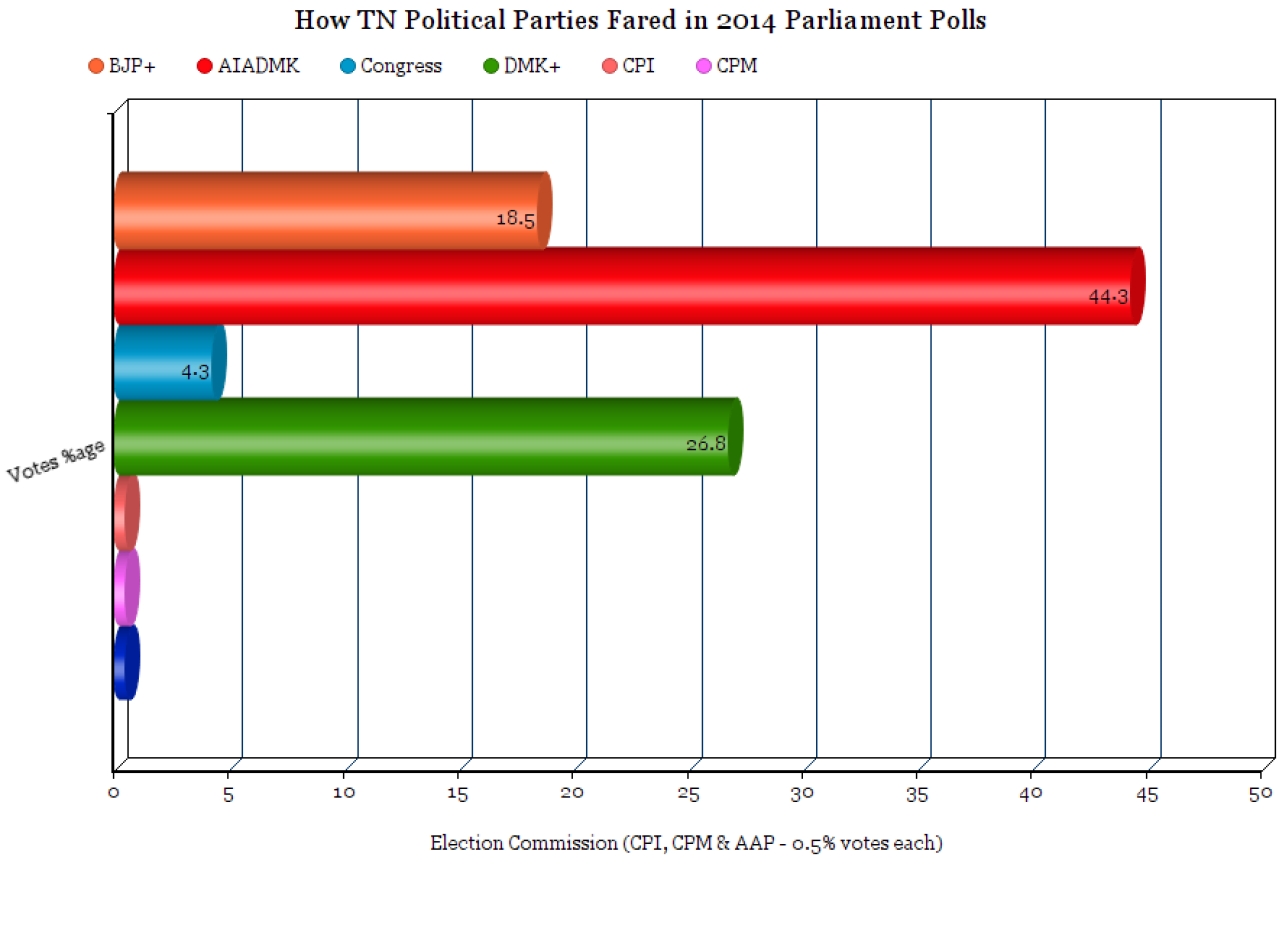 A look at the 2014 Lok Sabha and 2016 Assembly elections gives us the reasons why DMK and AIADMK have opted for a multi-party alliance.

The 2014 Lok Sabha elections in Tamil Nadu witnessed a multi-cornered contest with the AIADMK, DMK, BJP and Congress choosing to go it alone. The MDMK, PMK, DMDK joined the National Democratic Alliance with the BJP. The DMK had the VCK, IUML and Puthiya Tamizhagam in its fold.

Of the 39 seats, the AIADMK romped home in 37 constituencies, the BJP picked up Kanyakumari seat and the PMK won from Dharmapuri. The graph above gives details of the vote each alliance or party got in the elections then.

In the 2016 Assembly elections, Tamil Nadu again saw a multi-cornered contests with the AIADMK and DMK being the main rivals. The BJP was left alone with its 2014 partners PMK, DMDK and MDMK deciding to not to contest as part of NDA. 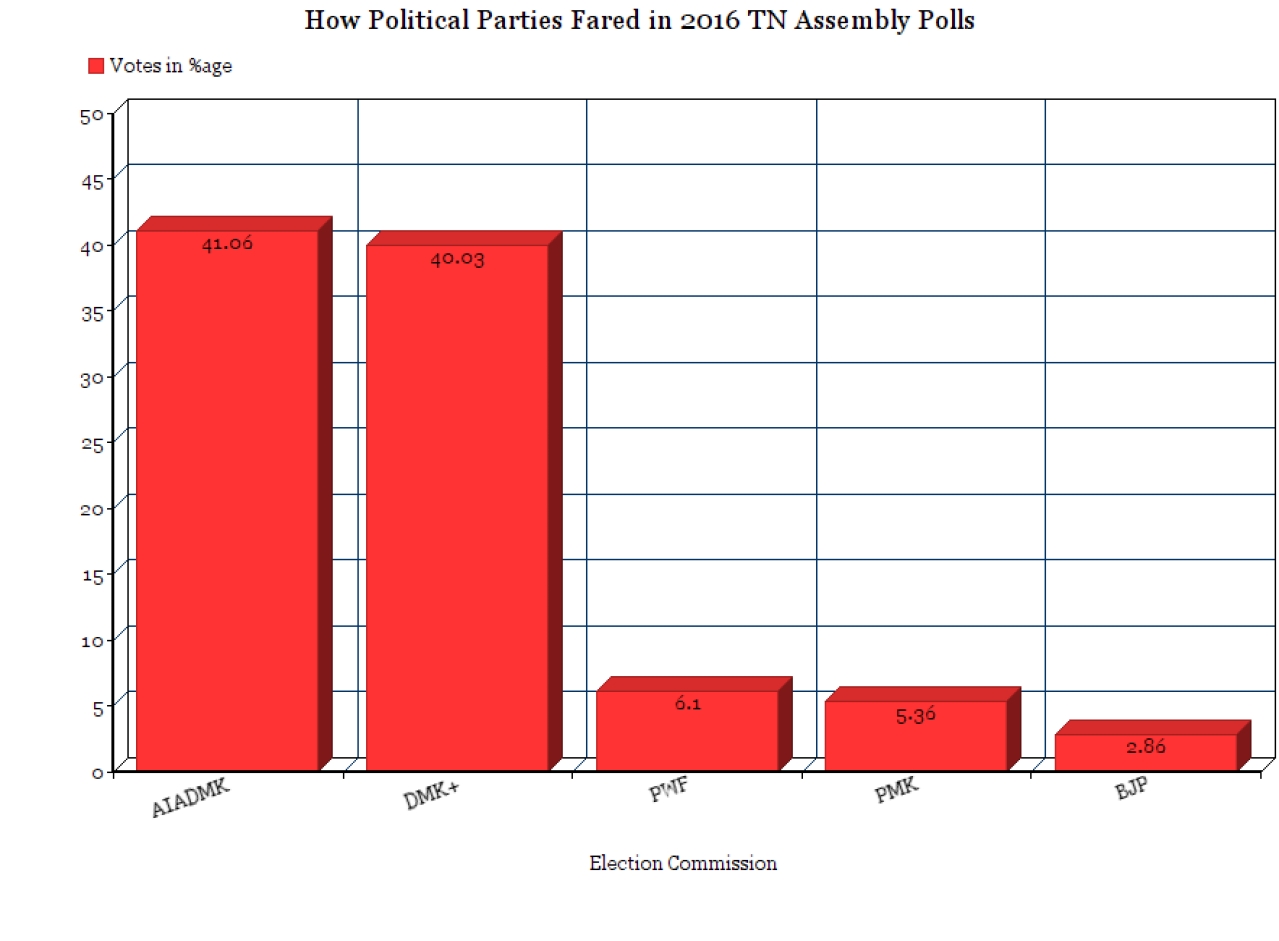 The elections saw the AIADMK win 135 seats, DMK 88, Congress 8, IUML 1, while polls to two seats, later won by the AIADMK, were cancelled in view of irregularities in those constituencies.

The AIADMK, despite taking a courageous decision to go it alone again, managed to win 41.06 per cent of the votes, while the DMK, which improved on its 2011 Assembly elections, got 31.86 per cent votes on its own while its alliance earned a little over 40 per cent votes.

The People’s Welfare Front, comprising the DMDK, MDMK, VCK, TMC and Communist parties, polled 6.1 per cent. The PMK, which also decided to go alone to test its strength, got 5.36 per cent votes.

The 2016 elections proved that a strong alliance can help any front to fare well in the polls, though the AIADMK rode on Jayalalitha’s charisma. Opposition parties, however, alleged that the AIADMK won on money power.

In the oncoming Lok Sabha elections, the State will see for the firt time the DMK and AIADMK going to the hustings without their main crowd pullers Karunanidhi and Jayalalithaa respectively. In view of these larger-than-life leaders passing away, both the Dravidian parties have adopted a cautious approach.

Still, the DMK sprung a surprise giving the Congress nine seats to contest from Tamil Nadu. More surprising was its decision to contest from only 20 seats in the Lok Sabha polls.

The second surprise is the DMK giving two seats to parties such as the Communists and VCK. Had Karunanidhi been alive, he would not have given them more than one seat. He would have smartly told them that he has given them a place in his heart.

On the other hand, one can understand that the AIADMK without Jayalalithaa is trying to consolidate through alliances. Hence, the ruling party has been capacious in its approach. Though the DMDK is yet to make up its mind, it is expected to join the AIADMK alliance with its entry into the DMK fold being almost ruled out.

Given the importance of getting the alliance arithmetic right, the AIADMK went all out to get the PMK in its fold. On its own, the PMK is capable of getting nearly six per cent votes.

One reason for Stalin to give so much space to the alliance partners is because he wants their unstinting support to win most if not all of the 21 Assembly seats. It shows how much the party values its position in the State rather than its role at the centre.

Some political watchers point out to the anti-incumbency factor playing a role in both the Lok Sabha elections and Assembly by-polls. But there are others who point to how Tamil Nadu Chief Minister Edappadi K Palaniswami has emerged smart in the last one-and-a-half years that some even see him as the State’s P V Narasimha Rao.

If the anti-incumbency factor plays out, then DMK and its alliance partners would want more than just these votes. Stalin and his alliance partners expect the minorities, especially Christians and Muslims, to fully back them, while the alliance can also look forward to support from the Scheduled Castes, thanks to VCK in its fold.

These three sections, if they vote en bloc for the DMK alliance, can provide nearly 28-30 per cent votes. This means the DMK would have to look for more than 10 per cent votes from the other castes and communities.

This is especially important since having VCK in its fold could spell trouble for the DMK alliance in western and northern parts of Tamil Nadu, where there has always been problems between the Scheduled Castes and Other Backward Castes like Vanniyars, which is the base of PMK vote bank.

The DMK seems to be definitely hurt by the PMK joining the NDA alliance. DMK leaders statements bitterly criticising PMK founder S Ramadoss and his son Anbumani Ramadoss are indications of their hurt.

Meanwhile, the BJP has begun to contribute more to the alliance strength with AIADMK cadre now feeling that naming Chennai Central Railway Station as MGR Station are things that they couldn’t have imagined even under Jayalalithaa.

The NDA will also likely gain from the Rs 2,000 assistance the Tamil Nadu is giving to below poverty line families. In addition, the Rs 6,000 assistance to farmers provided in the Union Budget could also help. With the Tamil Nadu Government assistance set to be put in the beneficiaries account soon, farmers will get at least Rs 4,000 before the Lok Sabha elections.

They are of the view that the Modi government has been doing much Tamil Nadu. The release of the Indian Air Force Wing Commander Abhinandan Varthaman could also have some positive effect on the voters. Impact of the Centre’s tough stance against Pakistan will be less, though.

The contests for Lok Sabha elections and the Assemby bypolls are likely to be closely fought with the winning margins set to be thin. A few thousand votes here and there can swing the fortunes of either alliance.

In these circumstances, the DMK has but no alternative than to look for votes that could come from the dithering lot or those undecided. With criticism of DMK’s anti-Hindu stance increasing daily, the party has no other option but to tone down its anti-Hindu rhetoric. The thinking, perhaps, is that this can confuse the uncommitted ones to sway towards it.

So Basically Mr. @mkstalin is a repeat offender. He neither seems to have attempted to learn the meaning of what he is quoting (continues to misquote) nor has he stopped Hindu Bashing attitude.
DEAR HINDUS ARE WE REALLY GOING TO VOTE FOR THIS GUY! pic.twitter.com/XFjYeGouUw

This is why Stalin and DMK now say that they are not against any individual community or religion. But with videos of Stalin making statements criticising Hindu rituals and customs repeatedly emerging from the archives, the damage has, probably, been done.

Get Swarajya in your inbox everyday. Subscribe here.
Tags:
465 Shares