Understanding Self-Immolation as a Form of Protest 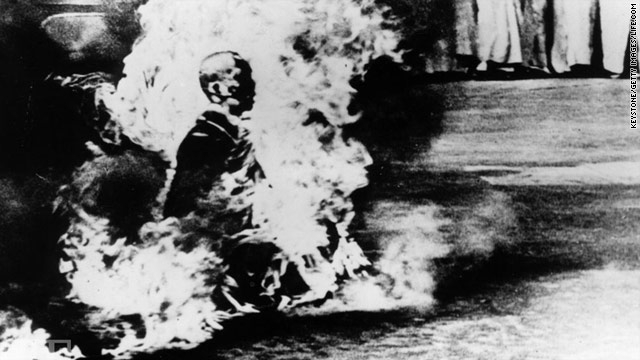 On January 29, 2009, K.Muthukumar, a Tamil journalist-activist died after setting himself on fire in protest against atrocities on Tamils in the civil war in Sri Lanka. Here, Swarajya brings to you an enquiry into the phenomenon of self-immolation in India

Self-Immolation as a form of political protest captured the attention of the world when Buddhist monks in South Vietnam resorted to it while protesting against the brutal and repressive regime of Ngo Dinh Diem. A Roman Catholic ruler, Diem was backed by American state establishment and repressed the native Buddhists. A Buddhist Monk Thich Quang Duc set himself on fire protesting against the repressive regime. The gory imagery was transmitted across the world and soon self-immolation as a means of protest was adopted by parts of the world including India.

Sadly, self-immolation as a tool of protest has figured repeatedly in the history of popular movements in independent India. Inexplicably, in our country, it is not used only as a form of protest but also to depict extreme grief at the passing away of an icon. In this piece Swarajya attempts to analyse the psychology of self-immolations in India through their history.

The notorious distinction of introducing the practice of self-immolation as a protest tool in modern India goes to Tamil Nadu. As far back as 1965, the state saw a series of them in the contemporary anti-Hindi movement. It started in Tiruchi district, where a farmer named Chinnasamy set himself on fire for the cause of Tamils. Soon, what was later termed the ‘Chinnasamy effect’ gripped the entire movement of the state.

The leadership of the movement, on its part, deified those who committed suicide this way. Plays which were based on the life of the deceased were staged and public places were named after them. In the following years, self-immolation went from being a mode of protest to being the ultimate proof of loyalty. The phenomenon also grew geographically from its origins in Tamil Nadu. In recent years, the families of the deceased have also been given compensation. In a macabre way, both the Tamil Nadu government and society has institutionalised this lamentable act.

Through the 1980s, there were many incidents when fanatical supporters of Tamil political leaders burnt themselves to death to prove their solidarity with their leader.

– In 1981, when Karunanidhi was arrested, 11 of his supporters immolated themselves.

– In 1984, when Tamil Nadu Chief Minister and icon M.G Ramachandran, fell ill, about a 100 of his supporters attempted self-immolation. 10 of them died. At one point the situation was so extreme, that the then-Finance Minister, Nedunchezhian, had to appeal to the appeal to not commit self-immolations as it would not help MGR in recovery.

– In 1987, when M.G Ramachandran died, it is estimated that a 100 people burnt themselves to death.

In 1990, then Prime Minister V.P Singh was facing political rebellion from an influential section of  his party. The Wily Raja of Manda, never known to have fought for any social justice related causes till then, decided to transform himself in to a Mandal Messiah. He tried to rest the initiative from his political opponents by unilaterally announcing the implementation of Mandal Commission report that was gathering dust. Those were the times of socialism engendered shortage economy and state was almost the only provider of jobs.

The nation erupted in huge protest especially with upper caste students taking to the streets. A DU student, Rajiv Goswami, decided to set himself on fire in protest against the central government’s decision to implement Mandal Commission. Imagery of  Rajiv Goswami, ablaze in fire, shook the nation’s conscience. The infamous ‘Copycat Effect’ resulted in hundreds of young students setting themselves ablaze. While Goswami survived the flames, his acts drove others, some much younger to him to follow in his footsteps. A few of them were not to be as lucky.

For Telangana and Tibet

In 2012, when the Telanagana movement was raging in erstwhile Andhra Pradesh, there were reports of pro-Telangana agitators setting themselves ablaze.

Similarly, when the Chinese premier was in Delhi in March, 2012 for the BRICS summit, a Tibetan activist put himself on fire in front of crowds and cameras.

Muthukumar would not have been pushed to suicide had a credible political narrative on Sri Lankan Tamils emerged in Tamil Nadu. Two decades had been spent on mindless rhetoric that ranged between unabashed hero worship of Prabakaran to sometimes even suggesting a ‘united Tamil nation’. These were precious years when a pragmatic line could have been pursued and built upon.

After twenty years of brinkmanship and loss of credibility all that Dravidian parties could do was stage fasts lasting from breakfast to lunch, write up conspiracy theories and stage roadside demonstrations. The inability of Dravidian parties to do anything about the Sri Lankan situation exposed the rhetoric filled, pretentious narrative to be what they were: vacuous and impotent. Muthukumar had nowhere to go.

It is difficult to identify the exact reason or the psychology behind self-immolation but a few informed attempts may be made. Firstly, it might be that the perpetrators consider setting themselves ablaze as the most dramatic way of making their point. The idea there might be that their argument will spread afar along with, and because of, the sheer shock of the news.

Secondly, there may also be the lure to be seen as the one who made the ultimate sacrifice for a cause. This is closely connected to the lure to be noticed by others even if not being notable.

Lastly, connected to the above point is the overwhelming and institutionalised attention that such an act results in. The media gets an attention-grabbing story, the concerne movement or party gets a symbol, and the society at large gets an issue. Today, on the sixth anniversary of Muthukumar’s death, we are perhaps as far from preventing another tragedy of a similar kind as we were six years ago.