UP: For Two Months, Police Kept Telling Parents Of A Missing Minor Girl They Can’t Rescue Her Due To Lockdown 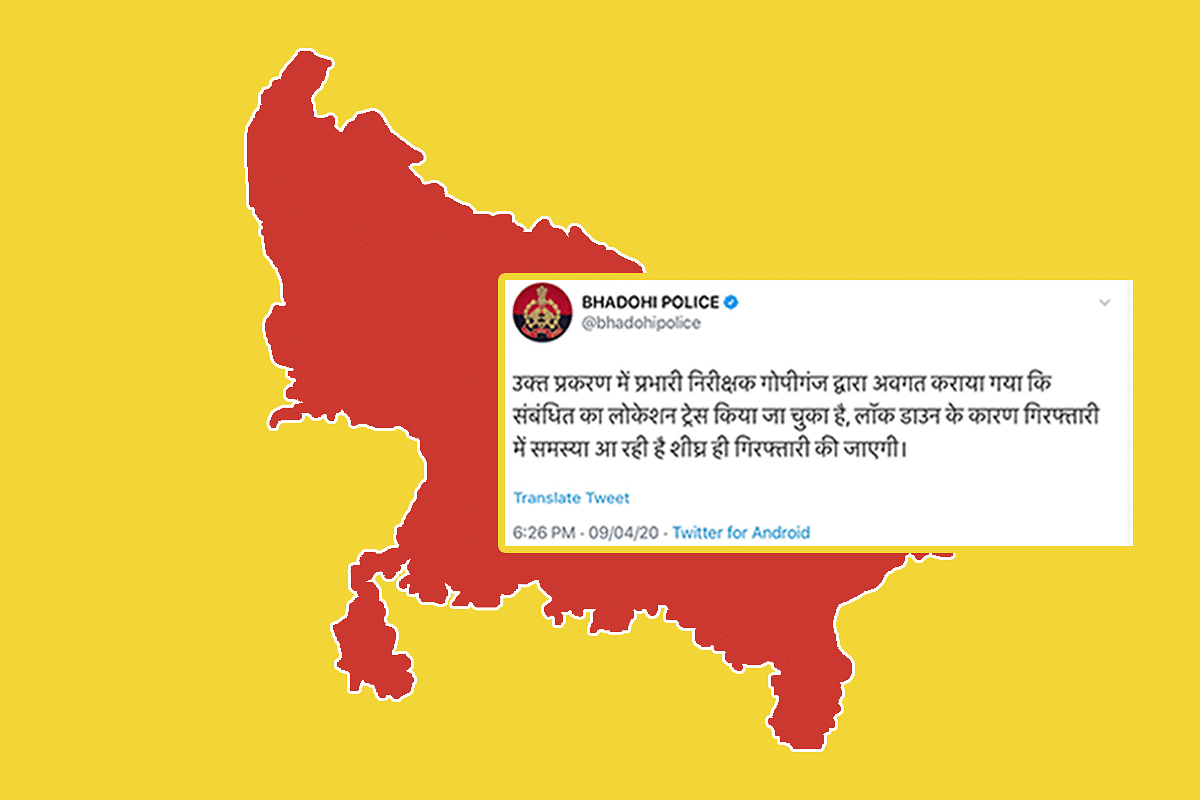 For nearly two months, police in Uttar Pradesh’s Bhadohi district kept telling the parents of a missing 15-year-old girl that they know where she is but can’t bring her back home because of Covid-19 lockdown.

On the other hand, when the case came to the notice of the national child commission, the girl was rescued the same day – putting a huge question mark on the ways and intention of the police. The commission’s chairman Priyank Kanoongo learnt about the case through a post by this correspondent on Twitter.

The girl was rescued from Gujarat’s Surat city on the evening of 9 May.

The girl had gone missing from her house in Bhadohi’s Joginaka village on 14 March.

An FIR was filed at Gopiganj Police Station the same day on the complaint of the girl’s father Jitendra Kumar Singh. The FIR (number 0066/2020) named ‘Shahid alias Guddu’ as accused; he was booked under IPC sections 363 (kidnapping) and 386 (extortion), and sections 7 and 8 of POCSO (Protection of Children from Sexual Offences (POCSO) Act, 2012) Act.

The complaint said that the girl stepped out of the house around 3 am on the intervening night of 13 and 14 March, to answer nature’s call, but did not return, and that Shahid is the one who took her.

For the next two months, the police repeatedly turned away the family whenever they went to the police station to inquire about their daughter.

“Every time, the police told us to wait until lockdown ends,” the girl’s father told this correspondent over the phone.

Dejected with the police response, the girl’s mother and aunt staged a dharna for several days in April. This was covered by the regional Hindi media.

All along, the Bhadohi police gave the same response from its official verified Twitter handle.

Reacting to a Twitter user demanding rescue of the girl, the Bhadohi police tweeted on 9 April that the girl’s location had been traced, but the police were facing difficulty due to lockdown.

On 11 April, the Bhadohi police tweeted that the girl’s family had been asked not to stage the dharna.

On 8 May, the handle tweeted that the police were unable to travel and bring the girl back due to lockdown.

The same day, the Bhadohi police tweeted a video statement, in which a police officer was seen telling some news channels, “the girl’s mother and aunt who are sitting on the dharna have met me several times”.

“We have traced the girl. The case is very sensitive. We explained to them that a lockdown is in place and the rescue would require the police to travel very far. The conditions are such that the police cannot go there. As soon as the lockdown ends, we will immediately bring the girl back...,” the cop was seen saying.

On 10 May, when this correspondent talked to the girl’s father, he said that he was happy to know his daughter is safe and has been rescued, but added that the police could have acted in time and rescued the girl even before the lockdown began (the nationwide lockdown was announced by Prime Minister Narendra Modi on 24 March).

“The police wasted the first 10 days when there was no lockdown. All they would do was call the boy’s [Shahid’s] uncle and friends from the nearby villages to the police station, and let them off in four-five hours. This drama went on till the police started giving excuse of the lockdown,” Singh said.

He named the police officer in question as inspector Krishna Nand Rai, who is in-charge of the Gopiganj thana.

Singh said that the girl’s maternal uncle is an armyman, and “even his visits to the police station led to nothing”.

“The cops would tell my brother-in-law that at least he should understand the pressures faced by men in uniform and not act as a patrakaar,” Singh said.

Singh says the police had traced the girl’s location within the first week itself, but did not bother to act on the tip-off.

“The police did not tell us anything. But they revealed the location to our pradhan. One day, I heard the pradhan talk to someone over the phone where he was saying that the police had traced the location,” said Singh. “However, the police never gave us clear information.”

Singh drives an auto-rickshaw for a living, and has two daughters. The younger one is yet to turn four.

He shared with this correspondent two letters that he sent to Chief Minister Yogi Adityanath in April. “I wrote to him as advised by my samaj, but nothing came out of it.”

Singh says he has not talked to his elder daughter at all since she went missing. However, he received a call from Shahid on the evening of 9 May — the day of his arrest.

“Shahid kept on repeating that he is not at fault at all. I was really angry and hurled abuses at him, and disconnected the call.”

Singh says Shahid was a mere occasional visitor to his sister-in-law’s house, which is located in the same street as his. He says Shahid is around “22-23 years of age”.

“All I know about him is that he works at his uncle’s shop where they sell egg. I did not know that he had eyes on my daughter,” said Singh.

The girl had appeared for two of six exams for her Class IX before she went missing, says Singh.

As the accused was from the other community, the case led to tension in the village, he says. “Ours is an all-Thakur village. There is not even a single Muslim family. It’s only in a market on the outskirts that one finds Muslims. The entire village is upset with me because of this case,” says Singh.

Singh says that the cops would often tell him that the matter is “sensitive” and they need to tread carefully. “This is because the boy belongs to another religion,” says Singh.

Notably, the police officer seen in the video put out by Bhadohi police’s Twitter handle too described the case as “very sensitive”.

When asked about the Bhadohi police’s response to the case all along, chairman of child commission Kanoongo told this correspondent that the existing child laws in the country must be implemented at all costs.