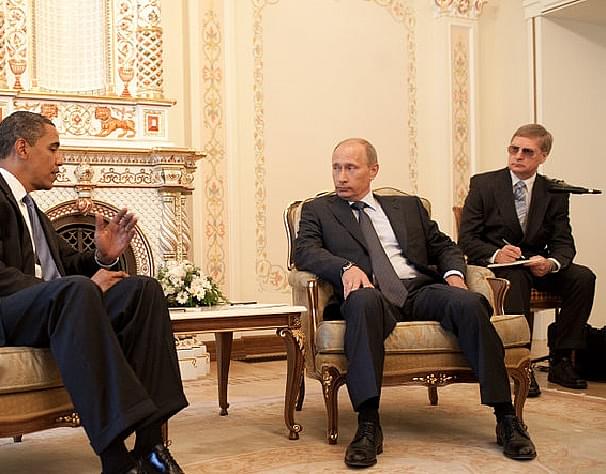 Vladimir Putin had to intervene in Syria,as the situation was spiralling out of control . But if he were to fail and if even Obama steps back from the region,  ISIS would have a field day.

The Middle East has become a theatre of the absurd. Armed to teeth but blocked in mind, the US is unable to even poke ISIS, much less inflict on it a body blow. The Americans have not been able to formulate a winning strategy to deal with arguably the most ferocious of Islamist groups active in the region. Barack Obama’s speech at the UN last month stood out for two signature comments. First, the US has learnt over the past decade that it “cannot by itself impose stability on a foreign land”. Second, “the United States is prepared to work with any nation, including Russia and Iran, to resolve the conflict in Syria.”

Enter Putin, firing from the hips. “Do you realise what you have done?” he asked the US, pointing at its contradictions in Syria. The US wanted President of Syria Bashar al Assad to go without offering any alternative to the rampaging Islamic State.

Putin boxed Obama in, creating a counter-narrative in the Middle East. It is the elephant in the room. Though squirming in discomfort, Obama has no option but to grin and bear with a bilateral meeting on Syria and Ukraine. The battle against ISIS has fast degenerated into a battle of perception between Obama and Putin. At the moment, Putin is winning the battle hands down and guns up — in spite of Obama’s 18-month-long attempts to isolate Putin diplomatically. Ironically, the Obama administration, eager for Moscow’s diplomatic help, all but invited it. Now that Russian jets and tanks have arrived in Syria, this intervention looks anything but benign.

John McLaughlin, former deputy director of the CIA, has been quoted as saying in an interview, “Anything we do now will be conditioned by their presence and influence. This is a reality we now have to deal with.”

Today’s ‘stark reality’ was a promise yesterday. To many including the US, UAE, Saudi Arabia etc, the possibility of Russian involvement in the battle against ISIS was a good omen and useful spinoff of the nuclear deal with Iran. Even those opposed to the deal appeared to console themselves by playing the Russian card.

Obama and his allies mistook it as an opportunity to manage Putin. They failed to anticipate that Russian President Vladimir Putin could and would come armed to the negotiating table. Putin embodies a kind of muscular diplomacy the US does not like as it spoiled their three years of fainthearted attempts to train and equip the Syrian opposition. Putin came and grabbed the opportunity with both hands, elbowing out all other players including Obama.

More angry than shocked at Putin’s bulldozing swiftness, Kerry did not hide his “grave concerns”. The question is what blinded the US of Russia’s propensity for direct military intervention. Such an unprecedented logistical operation couldn’t have escaped and challenged the intelligence of the US officials till the Russians started firing the missiles.

However loudly Putin may shout from the rooftops that his intervention was nothing but to fight the ISIS, no one misses the fact that the missiles are fired against the anti-Assad rebels advancing in western Syria, where Assad’s ancestral homeland of Latakia is situated in the northwest.

Russia can’t win more military success in Syria than the US has. But the danger of Russia winning the battle of perception is that this might be viewed in the Middle East as a full blown US retreat. Putin will be more than happy to see this view gain more and more currency. Uncertainties abound.

Russia may also have been bound by the rise of ISIS’s stock in its own backyard. More than 2,000 Russian citizens have joined the terror outfit in Syria. The recruits are bred across the length and breadth of the country including pockets in and around Moscow. The terrorist groups in Russia’s North Caucasus are reported to have pledged loyalty to ISIS who in turn, has declared the region to be an IS province.

Having forced its hand, Russia would do well to not falter. There is no space to retrace. The clock can’t tick back. Otherwise, Israel, Saudis, Turkey and the US will kick themselves in an opening to contain and undermine Russia and its Shi’ite coalition. They will not have any compunction to embolden the anti-Assad rebels, reinforce no-fly zones and firmly establish ‘humanitarian’ corridors, sanctuaries in Syria. While new strategies will not be formulated by the US and allies for triumphalism, the idea would be to salvage their pride. What more can the ISIS ask for than a battlefield left, abandoned and deserted lock, stock and barrel to overrun?