Uttarakhand: How Yamkeshwar MLA Ritu Khanduri Is Trying To Combine Innovation With Her Father’s Military Discipline To Make A Difference 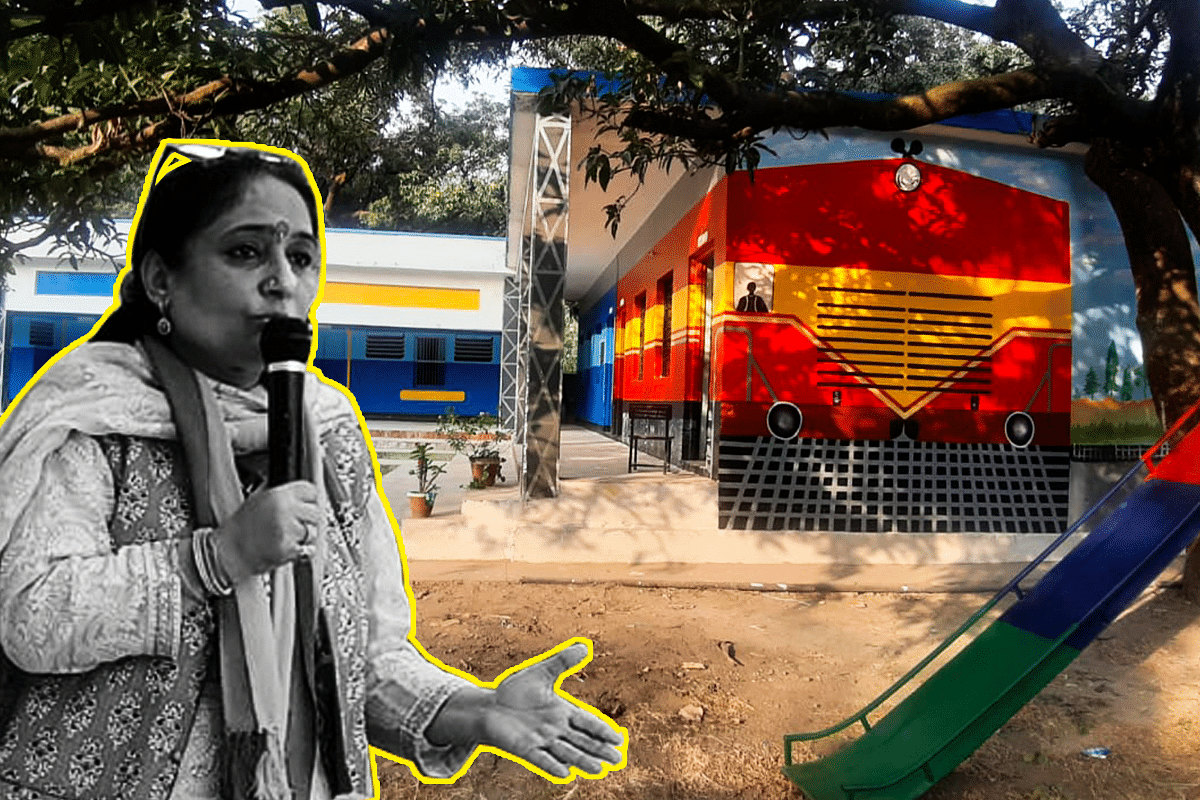 In December 2020, the ‘Yamkeshwar Express’ was unveiled in Uttarakhand's Pauri Garhwal region. This small milestone marked a new beginning. Many children living in Yamkeshwar had never seen a train, just as others living in the region.

Work on the ambitious Yognagri-Rishikesh-Karnprayag rail project is ongoing in the cradle of tough geographies, and trains are a thing of fantasy even today.

So, when the children got the first glimpse of the gorgeous new ‘Yamkeshwar Express’, they became pretty thrilled. The blue of its compartments is particularly appealing. It is stationary, yet it is ready to leave for other stations.

The Yamkeshwar Express is a name given to part of a primary school — transformed by the local people with the support of Member of Legislative Assembly (MLA) from Yamkeshwar, Ritu Khanduri. Many children from nearby places rushed to Yamkeshwar to have a glimpse, Khanduri told Swarajya over the phone.

Spurred by the exuberance among children, she is determined to take the express, that is, replicate the model, at other schools in the higher parts of the region. Khanduri told this author, "Upar bhi le jana hai Express ko." "Upar" is a word used for referring to the higher regions in the hill state.

Bringing the Yamkeshwar Express to the children of the block took shoots from Khanduri's affinity for "shiksha" (education), schools and children. "Didi hum isko ek train banaenge," a set of creative people in the block told her. She agreed.

She adds, "it created so much buzz, people from Rishikesh and other places in the region are coming to see the school."

In 2017, the Trivendra Singh Rawat-led government came to power. Khanduri won from Yamkeshwar. A journey began in politics.

In October last year, Khanduri was appointed the state head of the BJP's women's wing. The responsibility extends her work canvas from small pockets and measures of social work in the region, to groups of women and women-related work.

"I am fortunate to be working with a wonderful team of women who are adding strength to my work under the women's wing," she adds.

This small change in the school is not a big deal. At the same time, it is not just a cosmetic change or simple beautification of a school building.

For the children of Uttarakhand, it means an added reason to be at schools. For the region, any step towards making education more interesting, accessible, is a small but solid step towards better education, and a stronger base.

Khanduri adds, "we are providing furniture to work towards finishing the daree (mats) system. Solar lights and computers have been given to schools."

During the end of December, Khanduri set off for the last trip of 2020 to Yamkeshwar — her constituency. A road in Bukandi village was inaugurated.

In 2020, working to fight the impact of Covid was marked by challenges for Khanduri. She says that once the people overcame fear — keeping utmost precaution — their working towards relief, helping the needy and the incoming residents from other states, and keeping the momentum of the work in the fight against Covid became easier. They got strength from the contribution of women in Yamkeshwar.

For 2021, she is looking at filling gaps in Swargashram in the area of health.

This initiated her work "towards 150 km more of the Pradhan Mantri Gram Sadak Yojana (PMGSY) road" in her constituency and towards PWD roads. The completion and inauguration of the Janki Setu by the Trivendra Singh Rawat government has spurred the momentum and confidence for work on "other smaller bridges in the region".

Ritu Khanduri is aware of the importance of the completion of road projects. Her other task towards improving basic infrastructure is finding solutions to water-related problems in her constituency. "Water is an issue in my constituency. I have been able to complete the Bhairavgarhi pumping yojana in the constituency."

Her father, former Member of Parliament from Pauri Garhwal and former Chief Minister Maj Gen (retd) Bhuwan Chandra Khanduri had pursued the cause of roads in the state. In 2015, he had reportedly pointed out that any negligence in the implementation of various central schemes and plans (when NDA II in power at the Centre) will "not be tolerated".

At the meeting, he had instructed officers to discharge their duties honestly.

Known for his terseness in delivering messages on laxity and his disciplined-laden sincere approach to work, he had said that he should be informed in case any problem is faced in the implementation of schemes.

In 2015, The Pioneer reported that he chaired a discussion on centrally-funded schemes related to rural roads, potable water, health, education and other issues. At this meeting, he pulled up an official of the Pradhan Mantri Gram Sadak Yojana (PMGSY) for being late in reaching the meet of the district vigilance and monitoring committee. So much so, he did not allow the official to attend the meeting in Pauri. This particular meeting was attended by then Yamkeshwar MLA and Lansdowne MLA.

She knows that she has "big shoes" to fill. At times, the elders in the region and constituency remind her of her father's attitude towards discipline.

And when she is late by even a few minutes, she is reminded of the "big shoes" and her father's strict approach to discipline.

"General saab kya kehte? (what would B C Khanduri say to this)" — the elders in the region remark quickly.

Working for bettering infrastructure, schools, health facilities, and women's empowerment, is her way to taking forward the legacy.

The elements and traits of B C Khanduri's work style are of importance to Ritu Khanduri, as much as they have been to Uttarakhand in the past. Reason: they are in people's collective memory. Knowing the value of people's faith in the clean image of "general saab", the BJP once fought on the slogan "Khanduri hai zaroori".

As his daughter, Ritu Khanduri witnessed and participated in his campaign for the 2014 Lok Sabha poll, it immediately gave her the chance to soak people's respect for him and their trust in him. This election was to take place after the Kedarnath floods (2013). Khanduri was neither MLA nor chief minister. 2012 had come as a jolt.

In 2012, the BJP was hoping to make a comeback in the state. The 2009 Lok Sabha had seen the BJP lose all five seats to Congress. Khanduri was steered away from power in the state. In the 2012 assembly polls, he fought from Kotdwar (an assembly constituency in Pauri Garhwal Lok Sabha).

That there are people working against his good work within the party was well known to Khanduri (and voters who supported him). But there was more to it. A major blow came when workers of the party quietly aligned themselves with the Congress camp and infighting cost him the seat that mattered. He lost Kotdwar. BJP 'lost face'.

In 2013, people's voices grew against the way the flood-related rescue and relief were handled by the ruling Congress governments in the Centre and state.

In 2013 itself, the value of Khanduri's presence became palpable in his absence on that one seat — Kotdwar.

In 2014, Khanduri would return to fight the Lok Sabha polls from Pauri Garhwal. In the midst of the wave for Narendra Modi, the people of Pauri Garhwal, as seen and felt by this author on ground during the poll season, were clear that they want vindication for Khanduri — from the Congress, as well as from the infighters. This is an outsider's view.

Here is what it looked like from the inside — to Ritu Khanduri. "In 2014 was as if people wanted a vindication of Kotdwar. The emotion was: 'Kotdwar mein haraya thha to ab aise jita kar layenge.' One could feel it all around the election campaign. Poore maahaul mein palpable thha ki general saab ki haar hui hai humein badlaa lena hai (we have to avenge his defeat)."

People's faith in his clean image, stature and work had been Khanduri's intangible asset in politics. The 2014 campaign was Ritu Khanduri's chance to draw lessons — from the outside.

"It was as if they wanted to say: it isn't his election. It is our election. He has worked with certain principles with sincerity. There was a feeling that because he lost... the kind of direction and development he could have given to Uttarakhand, that was lost because an election was lost," she adds.

Her focussed people-centric task is to help women become economically independent. For this, smallest steps, each small step, towards widening their communication and opportunities, and giving them confidence at every stage of their outward interaction would count.

Women of Uttarakhand are inherently inclined to hard work. It is natural that this quality makes them stumble upon their own skills, subtle dexterity and several ideas. The pace of work is gradual. The quality of work reflects pride, coarse beauty and respect for detail.

Children, educational institutions and education have been prime aspects in her works before she entered politics in 2017. She is working to improve the condition of schools in Yamkeshwar.

She has made efforts to spur opportunity windows for women from Uttarakhand to sell local produce and handicraft in and outside the state.

"The women of Uttarakhand are conversant, educated and hardworking, they look after homes, but they are not economically independent. We need to still do a lot more to give them financial independence. It has been three and a half years of work towards small steps," she adds.

Her team encouraged a woman in Yamkeshwar to shape a stock of indigenously designed and woven chappals. She was able to send more than 10,000 chappals made of a fibre sourced from Bhimal (Grevia optiva — an evergreen tree), manufactured in Swargashram, to France.

She supported a training programme for women to use jute for making chappals. "There are small yet effective initiatives taking place in Yamkeshwar under the bigger initiatives from the Trivendra Singh Rawat-led government," she adds.

In Mala village (Yamkeshwar), the resident women have taken small steps towards packaging the locally grown mandva, jhangora, haldi and selling the produce. "It is very well packaged stuff that people were buying in good numbers. It is a small but a great beginning."

In the sangathan, she along with her team of women, is focusing on dispelling information on the various aspects of work from the Centre and state, the yojnas.

She adds, "It is heartening to see the steps being taken to give women economic independence —whether through NRLM, we are doing an excellent job. From Mana to Dharchula, Garhwal women were busy doing something or the other to improve livelihoods during Covid — be it kitchens, masks, sanitisers, ration packaging."

She reveals a core aspect inherent in the women of Uttarakhand. "The speciality of women in Uttarakhand: Kaam chhota mile, badaa mile, hum karte bahut achche se hain (whatever work we are assigned, big or small, we do it well)."

This woman leader from BJP seems to be working with the same philosophy, keeping her dad's dictum of 'Nation First' and discipline at the foundations of her vision, work and ideas.