Vandalism Isn’t On, But Surely Lenin’s Statue Belongs To The Museum 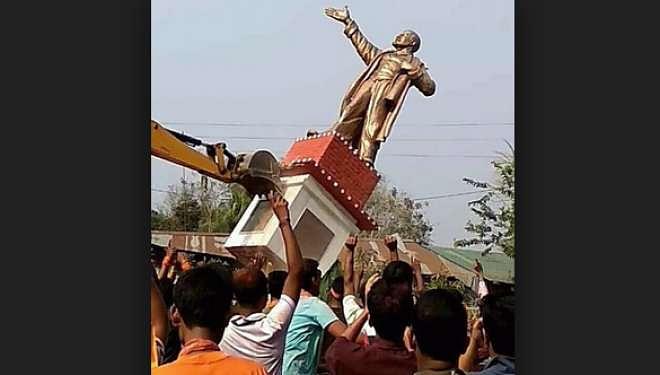 Statue of Lenin being brought down in Tripura.

One doesn’t have to defend the vandalism and iconoclasm of the Tripura mob that brought down two Lenin statues to silently assert that Vladimir Ilyich Lenin belongs in the museum. One can’t say the same thing about Karl Marx, for Marx fathered the idea of communism, and is in the same league as other Abrahamic prophets like Moses, Jesus and Mohammed. Ideas can be revered, even expanded and reformed, but murderous implementers of an idea ought not to be on the same pedestal. Much less in a public square.

A Lenin statue in India makes as much sense as putting up a Hitler statue here just because Netaji thought he could help free India from the Brits. Lenin was – at best – a Russian national hero (or villain). If today’s Indian communists think Lenin is still their hero, it’s one of a piece with the early naxal cry that “China’s Chairman (Mao) is our Chairman”. Both are illegitimate as national icons in India, more so when both were mass murderers of their own people.

One tends to associate Josef Stalin with the murder of millions, but Lenin was the true author of anti-people pogroms, having once famously said: “How can you make a revolution without firing squads?”

In his book The Square and the Tower, historian Niall Ferguson shows how Lenin wanted mass killings in order to cement the Bolshevik hold on power. In one kulak uprising, Lenin is said to have advised his partymen thus: “Hang (and I mean hang so that the people can see) not less than 100 known kulaks, rich men, blood-suckers…”.

It speaks much for the hypocrisy of the Indian Left that they will use M S Golwalkar’s admiration for Hitler as a stick to beat the Bharatiya Janata Party with, but Hitler’s fellow-mass murderers Lenin and Stalin continue to be their heroes and their portraits adorn party offices.

Some critics on the Left point out that Lenin was idolised even by some of our early freedom-fighters like Bhagat Singh. Kavita Krishnan tweeted: “You can topple Lenin's statue. But can you wipe out #Lenin from the hearts & minds of Shaheed-e-Azam Bhagat Singh & his comrades? #Lenin #Marx #Communism inspired our revolutionary freedom fighters. RSS - which mocked those martyrs - can't erase that legacy!”

The problem with this kind of argument is simply that it is invalid in the current context. Bhagat Singh was hanged when he was just 23, and at 23, one can have radical ideas. Moreover, in those days very little was known in India about Lenin’s murderous political instincts. The question to ask is whether a Bhagat Singh, if he were here today, would endorse a Lenin who turned out to be nothing like his dream icon. Also, would a Subhas Chandra Bose today have wonderful things to say about Hitler?

The same argument would apply to early Indian nationalists, who were attracted to socialist and communist ideas at a time when the weaknesses of these totalitarian ideologies were not apparent. Even Jawaharlal Nehru took us down the path of socialism, and Indira Gandhi carved the word into the preamble.

What survives today is the broad idea of the need for a more equitable distribution of wealth, not the idea of socialism and communism as perfect systems.

Marx’s 20/20 rear window view of historical developments, including his materialist interpretation of history, was a great contribution to mankind’s knowledge, even if subsequent experiments with his ideas showed socialism and communism to be flawed. It is worth having a statue of Marx is some places, not Lenin or Mao or Stalin. Some Marxist ideals still hold good, but not the methods adopted to achieve them.

It is time the Indian Left gave up its rose-tinted view of communism’s early practitioners. They have left us a lesson on how not to approach the question of human inequities.