Vatican Flags At Vizhinjam Port — What Forebodes God’s Own Country? 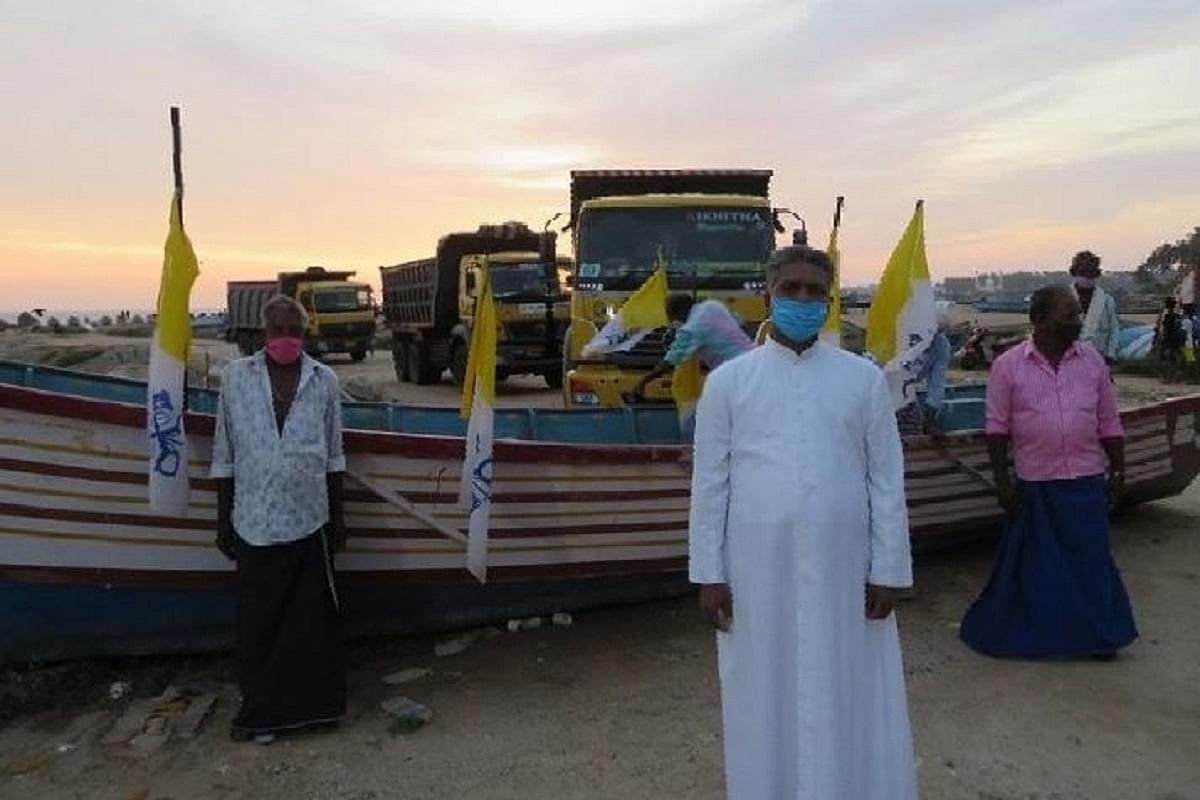 A Catholic priest leading the protests at Vizhinjam, Kerala.

The past week has seen tumultuous protests against the Adani Group’s upcoming port at Vizhinjam, just south of Thiruvananthapuram in Kerala.

Local fishermen used their boats to block inlets to the port, which is still under construction.

Large crowds rushed angrily through police cordons and barricades, onto the wharves and piers, bringing activity to a halt. And the episode swiftly became a key topic for discussion in the state legislature and media.

The protesters’ grouses include issues of inadequate resettlement and compensation, and concerns that the port is aggravating coastal zone erosion in its vicinity. A delay in project completion is also allegedly interfering with fishing activity in the area.

It appears rather strange that these protests have erupted now, since the port is almost complete.

Also, an expert committee has shown that erosion is not on account of the port, but because of cyclones.

Further, both the National Green Tribunal and the Supreme Court have dismissed pleas demanding that construction activity at the port be stopped.

Equally strange is the polite manner in which Kerala Police stand to one side while the protesters clamber ungainly over the barricades to casually enter the port area; and the utter absence of any widespread, heartrending wails of state apathy from the NGO brigade, or caterwauling from the green corner over environmental devastation by the ‘Capitalists’.

This silence is telling.

But stranger still is the fact that the protesters are almost exclusively Christian, and that these protests are being organised and led from the front, by priests of the Catholic Church.

Below, Catholic nuns and priests leading the protests at Vizhinjam, Kerala.

Yet strangest of all are the flags carried by these frocked priests of the Catholic church and their protesting parishioners. The most popular one has two plain bands of white and yellow.

See image below (and note the priest in the brown habit in left foreground, filming the action):

What was this white-and-yellow flag which we hadn’t seen before?

The answer to this mystery was provided by Jai Menon of Swarajya: this was an elementary, easy to mass-produce, representation of the Vatican flag:

(This is the national flag of Vatican City, an independent nation-enclave of Rome, in Italy, and the headquarters of the Catholic Church. It is where the Pope, the head of the Catholic Church, resides. The Vatican has observer status at the United Nations, and has embassies around the world, including in India. These embassies have full diplomatic status, are formally termed the ‘Apostolic Nunciature of the Holy See’, and the ambassador is known as the Papal Nuncio. The present incumbent of the Vatican’s diplomatic mission in Delhi is Archbishop Leopoldo Girelli.)

And, in fact, the plain yellow-and-white flag was the banner of the Papal Infantry from 1862 to 1870.

As if in confirmation, media images then emerged of protesters flying the official flag of Vatican City at Vizhinjam.

Note the perfect similarity between the protesters’ flags (below), and that of the Holy See:

So, what we have ongoing at Vizhinjam, by any definition, is a protest of the devout, led by religious leaders, with participants rallying under religious heraldry with deep historical symbolism, and behind the pennant of a foreign nation — on Indian soil.

We can but wonder what our Ministry of External Affairs has to say about this.

Now, symbols have always had great meaning in human society because iconography is inspiration.

They speak to us with greater passion than a stirring speech can.

When placed on a banner, a pennant, or a flag, and in the right hands, these symbols have the power to rouse a group into action, and rally them unto a ferocious charge.

By that, the lay protesters are the papal infantry, carrying their plain colours, and the priests leading them are…what?

Valiant members of a chivalric order like the Knights Templar, or the Teutonic Knights, even if only in their minds?

Or are we to be reminded of Julius II, the Warrior Pope, who personally led Papal forces against the French at the siege of Mirandola in 1511?

Of course, secularists seeking to deflect and trivialise the actual gravity of the situation may ask in turn: “Why are you making such a big fuss over a flag? Don’t you people fly the saffron pennant?”

Yes, good question, but there are two key differences.

First, this is not any flag, but that of another nation, and there are rules on when and where it may be flown.

Second, the bhagwajhanda or kesaridhwaj is the flag of Dharma, and Dharma, as we know, is not a subset of religion.

Boiled down, this is a massive mobilisation of the Christian community under progress in Kerala, the likes of which haven’t been seen since the 1950s and 1960s, when various Christian denominations organised themselves under their churches, to take on the Marxists.

It is difficult to figure out why this church-driven protest is happening now. Is it political?

The Congress-led coalition was shattered in 2020, when the state’s largest Christian party, the Kerala Congress of Jose K Mani, switched sides to the Communists.

Maybe this is a move to re-mobilise electoral forces under the Congress banner and cut Mani to size.

Or, were the Catholic priests forced to form the vanguard of these protests because the central government disarmed their traditional sepoys, the NGOs, by cracking down on their funding from the West?

Or, is this proxy ‘revenue generation’ following two poor fiscal years of the Wuhan virus pandemic, with an expensive assembly election in-between, and a politically-crucial general election which beckons?

Is that why the police is being extra decent with this lot?

Or, to get really, wildly conspiratorial, as so many on social media have, is this protest a diabolical move by the Chinese to thwart the commissioning of a strategically vital port, which would force Chinese trade to pass through Indian waters, and offer direct competition to Shanghai, Singapore, Colombo, Busan and Dubai for trans-shipment?

Whatever the real reasons behind this episode, it does no service to Kerala’s Christian community, the state, or the nation, because it would only harden divides of identity along religious lines.

It will foment further deracination, force a flourishing liberal section within the Christian fold to go into a shell, and encourage cultural separatism, exactly when the rest of the country is trying to break free from these discordant, schismatic shackles.

The grievances of protesters at Vizhinjam Port may be valid, for which they are free to agitate in a peaceful manner.

They are equally free to take their lord’s name for moral support.

Black flags or the tricolour are also fine.

But they have no right to organise themselves thus, under the leadership of the Catholic church, and wave the flag of another sovereign nation in protest on Indian soil.

This is a step too far, and rational members of the Christian community would do well to speak sense to the churches, and their laity, before matters get out of hand.