Voting Rights For Women: A Long Fight For A Better Life 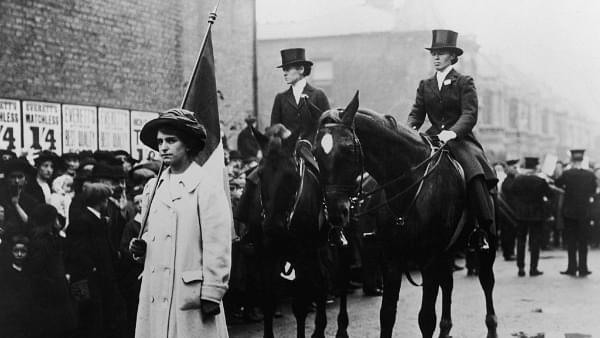 A flag carrier and two mounted marshals (riding astride) in a suffragette march through London in support of the Women’s Suffrage Bill, June 1910. (Hulton Archive/Getty Images)

The artist of a 100-year-old postcard printed in Britain took a wild guess at the probable scenario in the Parliament if women were to enter it as representatives of the people. While one woman on the postcard is seen talking about “Man and how to treat it”, another appears busy staring into the mirror; yet another is seen reading a book while a mother holds her baby close.

Another postcard declares: “Convicts, Lunatics and Women have no vote for Parliament”.

In those times, women were seen as having an inferior intellectual and emotional capability to men and therefore unable to make sound political judgment. So, they were found to be unfit to vote or stand for election.

However, with the First World War raging on and the men of the country engaged in battle, it was the women of the United Kingdom (UK) who supported the country from within by engaging in industrial activities. They worked hard for hours every day in factories and at home, were abused because of their inferior social standing, and laughed at because of their gender when they tried to put their intellect to use.

Women were also paid a lot lesser than men despite the back-breaking work. It was then that they started a long battle demanding the right to vote, hoping that at least with political representation their lives would improve.

The women formed unions, staged peaceful protests, and urged the Parliament for a right to vote. When they were ignored and mocked, some of them formed a new group and started a violent campaign. This section left explosives on trains and in post offices, cut telegram and phone wires, and burnt the homes of members of Parliament.

The government of the time, which arrested thousands of suffragettes – as they were called, also had to face the displeasure of the public when the convicts went on a hunger strike inside the jail and refused to eat. They grew weak and the government, fearing backlash, force-fed them cruelly with the use of mechanical devices like the rubber tube, pushed through the nose till the stomach, and with metal pegs to keep the mouth open.

When this move, too, failed to contain the suffrage movement and created a public outcry against the violence, the UK government passed the Prisoners (Temporary Discharge for Ill Health) Act in 1913, which was commonly called the Cat and Mouse Act. The suffragettes were released when they grew too weak from hunger, as they would no longer be a danger to the government, until they started to eat after they were released and regained health gradually. Then they were arrested again and kept in jail till they grew weak again from hunger. The alternative name to the Act came from the cat’s habit of playing with a mouse before finishing it off.

In 1918, a 100 years ago, after a long and hard struggle, women in the UK got the right to vote under the Representation of the People Act. But not all women. Voting rights were restricted to women who were over 30 years of age, owned a property, were a graduate in a university, or were the wife of a householder. One suffragette, Lilian Lenton, said, "I didn't vote for a very long time because I hadn't either a husband or furniture." Women contesting elections was unheard of and strongly opposed by even some women who believed their place was at home and not in the Parliament.

In December 1918, women in the UK voted for the first time; women also contested for the first time that year, and among the 17 contestants, only one woman won – Constance Markievicz became the first woman to be elected to the Britain House of Commons. However, Lady Nancy Astor became the first woman to enter the Parliament. Winston Churchill, who was appalled at the entry of a woman into the Parliament, reportedly said: "I find a woman's intrusion into the House of Commons as embarrassing as if she burst into my bathroom when I had nothing with which to defend myself, not even a sponge."

It was heartening to learn that women from India, too, joined their counterparts in the suffrage or right-to-vote movement in the UK. Princess Sophia Duleep Singh, daughter of Maharaja Duleep Singh, the last king of Punjab deposed by the British, lived in the UK all her life under royal patronage. Though a favourite god-daughter of Queen Victoria’s, she rebelled against the government and was at the forefront of the women's suffrage movement. As a member of Women's Tax Resistance League, she refused to pay her taxes. She also organised a flag day for Indian troops and worked for the Indian soldiers wounded in the Great War. She was in constant contact with Indian freedom fighters like Gopal Krishna Gokhale, Lala Lajpat Rai, and others. She became a revolutionary for the cause of suffrage, apart from fighting with the police and throwing herself on the Prime Minister's car during the brutal Black Friday march of 1910, in which hundreds of women got injured. She publicly supported the bomb makers and arsonists among the suffragettes.

Though our colonial rulers, who prided themselves on being a highly civilised society, took until 1918 to give their women the right to franchise, it was to the credit of Indian women that they fought for and won that right even before the country’s independence. While the British argued that universal franchise was a "bad fit for India", women like Sarojini Naidu, Lolita Roy, Herabai Tata, and Mithibai Tata travelled to London to convince the British Parliament for their right to vote. Roy went to London and campaigned for the cause even as early as 1901.

According to Dr Sumita Mukherjee of the University of Bristol, women from India received huge support from women's societies, councils, and other organisations in Britain and Ireland, who then sent letters to the India Office in London. Though Naidu's visit to London was unsuccessful, the British agreed to give freedom to separate Indian provincial councils to decide on voting rights for women. An Independent member of Parliament of Britain, Eleanor Rathbone, set up a separate committee to decide on women's franchise in India.

Mahatma Gandhi, who visited London in 1906 and 1909, was highly impressed with the peaceful protests and hunger strikes held by women for suffrage and praised them in his weekly journal, Indian Opinion. He believed Asia's men could learn some lessons from the women of England and come forward willingly to fight for the cause.

In India, the women’s cause was taken up by Edwin Samuel Montague, a British MP who was made the secretary of state for India in 1917. The 38-year-old was liberal in his views and even proposed self-government to India, which was discarded in favour of Lord Curzon's proposal to keep India as an integral part of the British Empire.

Naidu founded Women's India Association along with Annie Besant and met Montague to push for voting rights for women. It was partly due to Montague's efforts that India got universal franchise, though with a few riders. The British government said a woman's name should be removed from the electoral roll if she is divorced, a widow, or if her husband had lost property. In 1921, the then Bombay and Madras councils gave limited votes to women.

Now, universal franchise may seem like a non-issue across the world, with almost all countries recognising the need to acknowledge that intellect is not reliant on gender. Saudi Arabia was the last country in the world to grant voting rights to women, in 2015, apart from Vatican City, which only consists of men.

We have celebrated yet another platitudinous International Women's Day this year. At the ground level, the difference between the condition of women a 100 years ago and today is not much. It's time for both drawing room feminists and women in decision-making political offices to make the hard-earned women's vote worthwhile by giving their silent struggles at home and outside a voice. For those women who have fought hard for the franchise, voting was not just a right but the only path towards realising their dream of a better life, a hope for the future, and the freedom to choose.