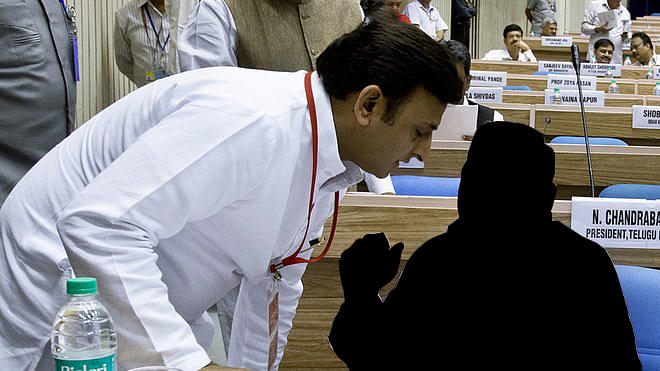 Azamgarh, the parliamentary constituency of Mulayam Singh Yadav, will go to polls four days from now — on 4 March, but there is no sign if Netaji will go there and campaign for the Samajwadi Party (SP) candidates.

The SP had won nine out of ten assembly seats in Azamgarh in 2012 when Mulayam was at the helm. “So far he is not scheduled to address any meeting in Azamgarh, and nobody is talking about him either,” said a local journalist.

The former president of the Samajwadi Party (SP) who strode the political scene of Uttar Pradesh like a colossus, has been missing from action in the 2017 assembly elections, even as the Bharatiya Janata Party (BJP) is aggressively campaigning to dislodge his son Akhilesh Yadav from power.

So where is Mulayam, the “maulana” who once stopped the BJP juggernaut?

He was seen in Jaswantnagar on 11 February 2017, where he addressed an election rally in support of his brother Shivpal Yadav. Conspicuous by their absence from this rally, where Mulayam openly supported the Lok Dal candidate from Etawah, were Ram Gopal Yadav, Akhilesh Yadav and other members of the Mulayam clan.

Five days later he was in Lucknow campaigning for his chhoti bahu Aparna Yadav as the family’s honour was at stake here. Then in a festive atmosphere, Mulayam cast his vote in Saifai on 19 February. Here he dismissed all talk of a “pari-war”.

Ever since Mulayam has either deliberately stayed away from electioneering or has been kept out of it after his support of the Lok Dal candidate in Etawah. His public appearances have been nil. Lok Dal’s national president Sunil Singh said at one of his press conferences that the ambitious son and brother (Ram Gopal) of Mulayam had forced him into a political sanyas.

According to sources, SP candidates were wary of inviting Mulayam to campaign for them as he was “unpredictable” about what he would say, even though he told journalists in Saifai that people should vote for his son and party.

A prominent member of the Samajwadi Party said that Netaji keeps moving between Lucknow and Saifai, but he had no election itinerary to follow as he had left everything to Akhilesh.

Strangely, five phases of elections are over, and Mulayam was not being missed. Even his name was not being invoked by the candidates of the party he founded.

As patron of the party, Mulayam cannot decide his campaign schedule, that authority now rests with the party president—Akhilesh, who has a point to prove.

The situation being what it is, Mulayam is unlikely to emerge on the public scene before the election results are out on 11 March, 2017. The verdict may either downsize Akhilesh or reaffirm his authority. In both the cases, Mulayam will be the man to watch.