West Bengal Is Turning Into A Communal Tinderbox, Thanks To Mamata Banerjee 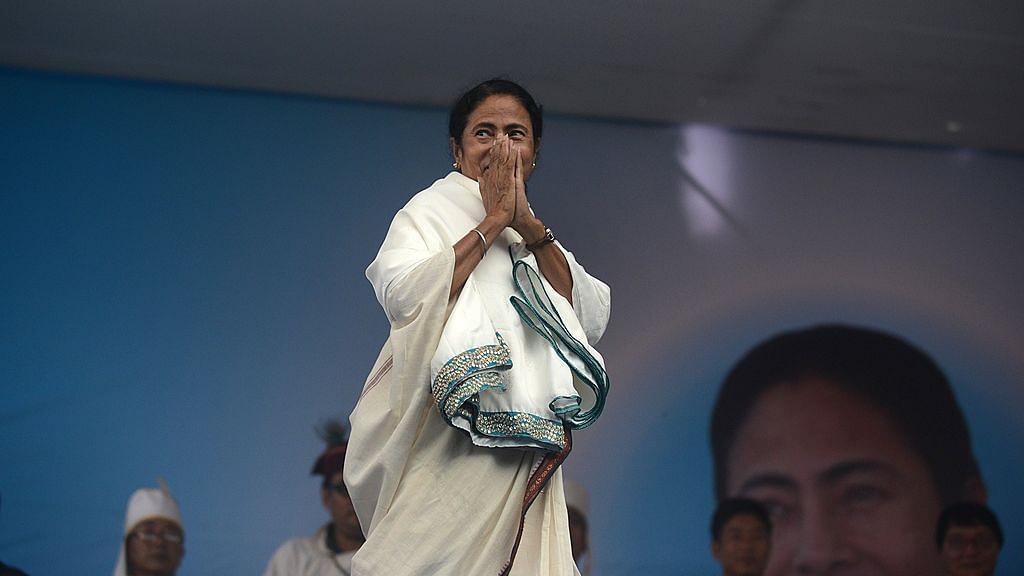 Banerjee greets supporters during an event in Kalimpong. (DIPTENDU DUTTA/AFP/GettyImages)

West Bengal is slowly, but steadily, heading back to its gory past when Hindus and Muslims were at daggers drawn and communal clashes and riots were frequent. And Trinamool Congress supremo Mamata Banerjee is solely to blame for this.

Banerjee’s blatant appeasement of Muslims is not only causing acute heartburn among Hindus, but has also emboldened the minority community to attack Hindus at many places. These attacks have been mostly unprovoked ones and with the sinister motive of driving away Hindus from their hearth and homes with the intention of taking those, as well as their livelihoods, over.

Her administration has been playing the role of a passive onlooker and the state police have been venturing into riot-torn areas only after the damage is done. The reason: Banerjee does not want her administration to take any action against Muslim rioters because she feels that doing so would alienate her precious Muslim vote bank without which it will be impossible for her to cling on to power in Bengal.

Take the latest such communal riot that broke out in a village at Howrah’s Dhulagarh area, about 28 kilometers west of Kolkata, last week. According to this report, Muslims brought out a procession complete with loudspeakers blaring Hindi film music on 13 December to celebrate Eid-e-Milad (the birthday of Prophet Mohammed), which actually fell on 12 December and was a public holiday. On 13 December, Hindus at Dhulagarh village, like in the rest of the country, were observing Margashirsha Purnima.

Hindus at the village requested those in the procession to lower the volume of the loudspeaker since the music was interfering with some rituals. This incensed a section of those in the procession and they started attacking Hindu homes and shops. According to local people, the attackers were non-local Muslims. Hindu houses and shops were looted and then set ablaze while, as this Zee News report says, police who reached the village were attacked by bombs and prevented from stopping the rioters.

Locals and leaders of Hindu Samhati (a Hindu social organisation) say the attack on Hindus at Dhulagarh, like many others that have occurred with increasing regularity all over Bengal over the last few years, were pre-planned. “Why would people participating in a procession to celebrate the birthday of the Prophet carry sticks, choppers and other lethal weapons as well as bottles filled with acid (which they hurled at shops), kerosene and diesel (which were used to set Hindu houses and shops ablaze after they were looted) and country-made bombs (that were hurled at the police)? Why was the procession taken out a day after Eid-e-Milad? And why were non-locals in the procession?” asked Hindu Samhati leader Prashanta Sen.

In October this year, communal riots broke out in 12 places all over the state over Durga Puja immersions and Muharram tazia processions. The seed for that was sown by Mamata Banerjee herself when she banned immersion of idols of Goddess Durga on Dashami (the last day of the four-day Durga Puja) and the day after that on the ground that the immersion processions would coincide with Muharram processions. She wanted immersions to take place before 4 pm on the day of Dashami or two days after that.

The Calcutta High Court came down heavily on the restrictions and said: “There has been a clear endeavour on the part of the state government to pamper and appease the minority section of the public at the cost of the majority section without there being any plausible justification… the state government has been irresponsibly brazen in its conduct of being partial to one community, thereby infringing on the fundamental rights of people worshipping Ma Durga.” The High Court also warned the state that it would be dangerous to mix politics with religion.

But by the time the Calcutta High Court delivered its stinging criticism of the Banerjee government, the damage had already been done. The state government’s restrictions had ignited anger and discontent among the Hindus of the state and triggered tension between the two communities. This simmering tension got the spark it required to get ignited into full-scale riots when those in the Muharram processions attacked the Durga immersion processions.

“At all the places, the immersion processions or Durga Puja mandaps were attacked by those taking part in the Muharram processions. And there seemed to be a clear intention to create trouble. For instance, some mischief makers burst a firecracker in the midst of a Muharram procession at Malda and started shouting that the procession had been attacked with bombs. In no time, swords, daggers, choppers and lathis came out and Hindu homes, shops and temples were attacked. It was pre-planned,” a state home department officer who did not want to be named for obvious reasons said.

Hindus were angry not only because of the unreasonable restrictions on Durga Puja immersions, but also over other such anti-Hindu and pro-minority actions of the Banerjee government. For instance, for four consecutive years, her government had been denying permission to 300 Hindu families of a village in the state’s Birbhum district to organise a Durga Puja because 25-odd Muslim families in that village would be offended!

In 2012, she started giving monthly stipends of Rs 2,500 and Rs 1,000 to imams and muezzins of the 32,000-odd mosques in the state. This was perceived, and rightly so, as one of the most blatant and shameless acts of minority appeasement. She has also allowed hardline Muslim organisations a free hand in the state. For instance, the hanging to 1971 war criminals in Bangladesh triggered massive protests by Muslims in Kolkata and at rallies called by them, they called for (as can be seen in this video) Bangladesh premier Sheikh Hasina’s death.

Last month, a massive rally that brought Kolkata to a halt demanded a steep hike in the stipends to the imams and muezzins to Rs 20,000 and Rs 10,000 per month respectively. A few months ago, another massive protest rally against notorious preacher Zakir Naik brought the city to its knees. Another massive rally against the Uniform Civil Code (the biggest such rally in the country till date) was held last month in Kolkata. In fact, Kolkata is emerging as the hub of hardline Muslim activism.

West Bengal has also become a safe haven for Islamists hounded out of Bangladesh. “Hundreds of Jamaat-e-Islami leaders and activists accused of heinous crimes like killings of secularists and bloggers have taken shelter in West Bengal. The Mamata Banerjee administration has turned a blind eye to their presence. The Khagragarh blast was an eye-opener. Many such Bangladeshi criminals and terrorists sheltered in West Bengal have been planning attacks on targets in Bangladesh,” said a central intelligence officer.

The fallout of all this is the steady Hindu-Muslim polarisation, especially in rural and semi-urban areas of the state. “This polarisation has been triggered by what Hindus perceive is the blatant appeasement of minorities. Many incidents in the past point to the state administration favouring Muslims over Hindus. While this has emboldened Muslims to attack Hindus, the Hindus have been chafing at this and their anger has reached the tipping point,” warns sociologist Dibyajyoti Goswami.

West Bengal is no stranger to communal riots. More than 5,000 people were killed and tens of thousands displaced in the infamous Calcutta riots of 1946. Many riots had occurred before that as well. Since then, too, communal riots have rocked Bengal. A few such examples will suffice: the 1964 riots in Kolkata that were a reaction to the pogrom against Hindus in erstwhile East Pakistan (now Bangladesh), the 1992 riots in the aftermath of the demolition of the structure in Ayodhya, the 2013 riots in Canning, and many more all over the state.

But whatever be the failing of the erstwhile Left Front government, and despite its soft minority appeasement, the lid was kept firmly on communal tensions. Banerjee, in her desperate bid to stay on in power, is stirring the communal pot by leaning heavily towards Muslims. This can only spell disaster for Bengal.