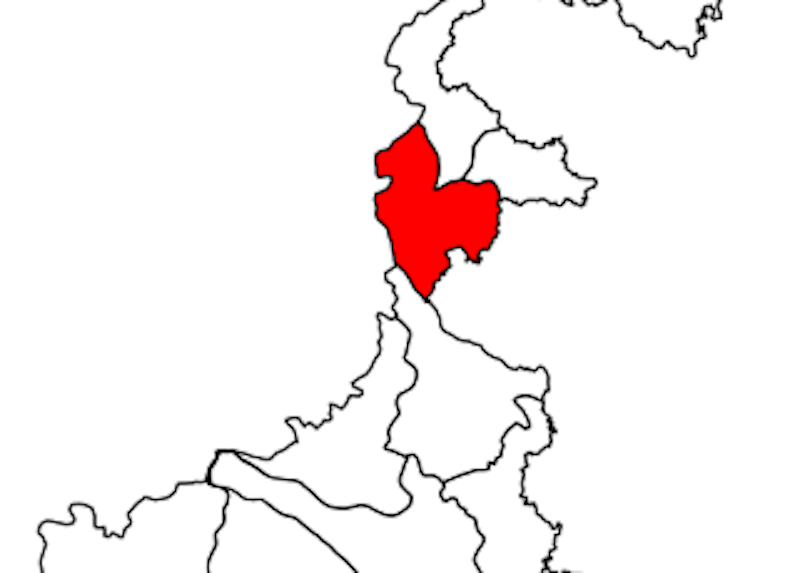 The commonality between Bengal and Kosovo is clear and ominous. The recent events in Malda should be a warning signal for those who are still in denial. The recent events in Malda, West Bengal, sent a warning signal to the whole country about the dangers posed to national integrity and security by aggressive Islamist forces. The unease was compounded by the complete self-imposed censorship of the events in the mainstream media, specially the English broadsheets and TV channels, who are normally so vociferous about “intolerance”. The spread of the Malda virus to the neighbouring Purnea district in Bihar led to some coverage in the national media, but this was again perfunctory.

Interestingly, carefully-engineered and orchestrated Islamist outrage had been seen for the last six to seven weeks in UP and, on one occasion, in Bhopal in next-door MP. In every one of the UP incidents, one saw huge crowds, extremely belligerent and hostile, gathering in medium-sized towns and bringing normal civic life to a complete halt. The slogan-mongering in these “protest” rallies was incendiary, to say the least. The outrage, of course, was directed at some strong remarks purportedly made by a minor UP-based Hindu political activist against the prophet of the Muslims.However, it is a matter of record that this alleged offence was in response to an undeniably outrageous statement made by the paragon of secularism and tolerance, Azam Khan, a key member of the Samajwadi Party government that rules UP.

All these would have been bagatelles, had not the protest gatherings been so flagrant in their anti-national posturing and so provocative in their communal speeches. In this age of electronic surveillance and data-gathering, it is just not possible to hide or camouflage these disturbing and dangerous developments. Of course, West Bengal under the Trinamool Congress (TMC) chief Mamata Banerjee and her rabble-rousing cronies, has been on the slippery road to disaster for a number of years. The assiduous courting of the minority vote-bank, coupled with a dangerous tolerance of cross-border infiltration, not just by the TMC, but also by its predecessor, the CPM-Left Front regime, for more than four decades, has created drastic demographic changes in at least four districts of West Bengal, all of which are on the Bangladesh border. Worse, the TMC has steadfastly refused to clamp down on aggressive communal grandstanding by certain segments of the Muslim population.

Last year, in May, I had analysed and assessed this disturbing scenario in this portal,in which I highlighted the very uncomfortable, and indeed dangerous scenario that prevailed in Bengal. This essay also underscored the importance of the demographic changes that were impacting West Bengal

If anything, such elements in West Bengal have become much more aggressive and combative. A recent article in Swarajya also looks at the events closely and sounds a warning bell for the Indian government and policy makers.

Against this backdrop, it would be most interesting if we were to study the real-life example of a country that was dismembered through a demographically-engineered coup. This, of course, is the example of Yugoslavia, a multilingual, multi-ethnic and multi-religious federal republic like India, which was once touted as a model country that harmonised and integrated its different roots. The Yugoslav experiment lasted for barely 70-and-odd years.

A few years ago, at a seminar in Delhi, I presented a paper that studied the break-up of Yugoslavia and pointed out the dangerous similarities between the south European country and India, and warned that the fault-lines in our country closely resembled those in Yugoslavia. For the benefit of the readers of this portal, I would like to go through the process of disintegration of that country and emphasise the critical factors that were at play then and which continue to influence events in our shores.

The lynchpin in the break-up of Yugoslavia was Kosovo, as we all know. I should emphasise here the critical importance of Kosovo in the Serbian/Slavic psyche. The Serbian army was defeated by the invading Ottoman Turks in 1389 in the infamous battle of Kosovo Polje. Understandably,  the Serbs view Kosovo as the cradle of their civilisation. The monastery of Vrdnik-Ravanica, which houses the remains of King Lazar, who led the Serb army in Kosovo and was killed in the battle, is also in Kosovo. If one were to seek a parallel, Kosovo is as important to the Serbs, as Chittorgarh and Jallianawalla Bagh are for us.

In a wider context, the Kosovo defeat was unprecedented, for the Slavic world and for Europe, vis-à-vis the world of Islam. It marked the beginning of Turkish domination in the Balkans that was to last till 1918. The steady Islamisation and Ottomanisation of Kosovo continued for centuries. Along with this, grew the myth of Turkish rule being tolerant and just. This sold the idea that Turkish rule over Christians in its European provinces was hunky dory.

Readers will notice the ominous parallel to the mythologisng of Islamic rule in India by some historians and scholars. In reality, the Ottoman Empire was created by centuries of jihad against Christian populations. Consequently, the rules of jihad, elaborated by Arab-Muslim theologians from the 8th to the 10th centuries, were applied to the subjected Christian and Jewish populations of the Turkish-Islamic dominions. Those regulations were an integral part of the Islamic legislation pertaining to the non-Muslim vanquished peoples. Therefore, they presented a certain homogeneity throughout the Arab and Turkish empires, as in Muslim Asia and India.

With this historical backdrop in place, we must fast forward to the beginning of the 20th century. After years of slow demographic change in Kosovo after Serbia’s capitulation to the Ottoman Empire, the population composition of Kosovo in 1900 was as follows : 50 percent Serbs, with another 5–7 percent of Goranis (a Slavic Muslim group), Jews and Gypsies. The balance 43-47 percent was made up of Albanian Kosovars. By 2000, the picture had changed to the following :

In other words, there was a complete demographic restructuring in Kosovo within 100 years. There were many factors that operated throughout the 20th century to bring about this transformation. The Albanian population of Kosovo grew constantly, both in absolute and relative terms, according to all the post-Second World War censuses 498,000 (68.5 percent) in 1948; 647,000 (67.2 percent) in 1961; 916,000 (73.7 percent) in 1971; and 1,227,000 (77.5 percent) in 1981. The critical element here was the high Albanian birth rate of 32 per 1,000 (the highest in Europe), coupled with the accelerated exodus of Serbs and Montenegrins after the riots in the spring of 1981. This further accentuated the demographic strength of the Albanians in this southern province of Yugoslavia.

Perhaps the most profound demographic change in Kosovo took place between 1971 and 1981 when over 100,000 Serbs and Montenegrins left the region. Since the violent 1981 riots in Kosovo, during which ethnic Albanian demands included the province’s political separation from Serbia and the establishment of a Kosovo Republic, the tempo of Serbian and Montenegrin emigration accelerated. In 1982 alone, 5,810 Serbs and Montenegrins left Kosovo and during the first three months of 1983 yet another 1,180. The ethnic cleansing of the Serbs and fellow-Slavs in Kosovo culminated in the almost complete Albanisation of Kosovo by 2007. Out of an estimated population of 2.1. million in 2007, Albanians constituted around 92 percent.  The demographic coup was over.

What are the lessons that West Bengal and India can draw from the Kosovo experiment and the debacle of Yugoslavia?  For certain observers and analysts of a certain hue, the recent events in West Bengal (and indeed in parts of UP and Bihar) are nothing but expressions of “minority rights”, “secularism” etc. Clearly, these people are not prepared to look at hard reality and realise that Islamism is a political ideology and is not something that has been dreamt up in a laboratory peopled by “right-wing extremists”.

In this context, in my earlier paper, I outlined the paradigm of a demographic destruction of a multi-ethnic, multi-religious nation and the creation of a mono-ethnic and mono-religious country, based on the real-life experiment in Yugoslavia and Kosovo.  Readers will see the parallels between what happened thousands of miles from India and what is now taking place in our shores. One critical fact in the historical canvas must be spelt out at this stage. This is the policy of the post-war Yugoslav leader Tito to appease the Kosovo Albanians. The Kosovo imbroglio must take into account the consequences of this misconceived idea.

Tito, after his falling-out with the Soviet Union in 1948, sought to build up an alliance with Albania, whose leader, Enver Hoxha, though an avowed Marxist and atheist, was also a committed Albanian nationalist. Tito and the Yugoslav senior leadership mistakenly assumed that taking a soft-line on Albanians in Kosovo and on the rapidly-changing demographic balance in that province (in favour of the Albanians) would give Yugoslavia a stable relationship with its southern neighbour.

The paradigm of a demographic coup must now be spelt out in some detail. The process  can be summarised quite easily :

—Bring about drastic demographic change in a province or part of a federal country, through inward population flows of a particular group (religious, ethnic or linguistic) from a neighbouring country or through significantly higher birth-rates domestically.

—Create law and order problems for the federal / central authorities and administration.

—Terrorise the erstwhile majority (that has been reduced to a minority) and force them to emigrate from their original homelands (Kashmir earlier and Bengal in the near future).

—Create civil-war conditions or tensions in the province/region.

—Internationalise the conflict and involve other regional and global powers.

—Use  the  international Islamic  lobby to  finance insurrection and obtain arms  to  combat  the federal / central forces, and  also  to  project their  “cause” in international organizations and forums.

Indian citizens, who are concerned about the nation’s well-being and security, will certainly observe the surreal similarity of current developments in Bengal with the Kosovo paradigm. The commonality is clear and ominous. We can only hope that our public opinion and the country’s national decision-making apparatus will realise that the experience of a far-off country is of great relevance to us. We can protect and safeguard ourselves only if we draw the appropriate and correct lessons from history.