What Does The Arrival Of Manoj Sinha In Jammu and Kashmir Signify? 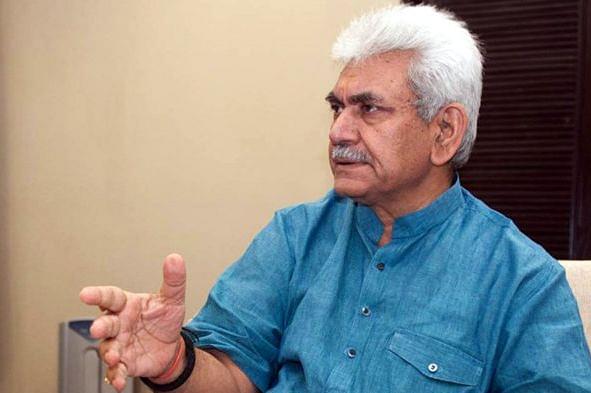 Union Territory of Jammu and Kashmir saw a swift leadership change last week. Senior Bharatiya Janata Party (BJP) leader from Uttar Pradesh, Manoj Sinha, was appointed as the Lieutenant Governor (L-G) of the Union Territory. Incumbent L-G Girish Chandra Murmu had resigned and was sworn in as the Comptroller and Auditor General of India (CAG) within a few days.

Sinha, a three-time Member of Parliament (MP), was the Minister of State for Railways and later held independent charge of the Ministry of Communications in the first term of the Narendra Modi government.

It is important to outline the reasons that led to the 61-year-old’s appointment to this crucial post in Jammu and Kashmir. For this, it is necessary to go back to June 2018. BJP withdrew support to the government led by Peoples Democratic Party (PDP) on 19 June 2018, bringing down the Mehmooba Mufti-led government.

On the very next day, Indian Administrative Service (IAS) veteran B V R Subrahmanyam was appointed Chief Secretary of the state. Subrahmanyam had earlier played a key role in eliminating the Maoist insurgency in Chhattisgarh. He has had a stint with the World Bank as a senior adviser from June 2008-September 2011. He was also the private secretary to former prime minister Dr Manmohan Singh from 2004-2008.

There was a strong purpose behind sending him to Jammu and Kashmir after the region came under President’s rule.

The Chhattisgarh cadre officer was instrumental in laying the groundwork that led to the abrogation of Article 370 and Article 35(A) in August 2019. Subrahmanyam’s vast experience in various sectors propelled key decision-makers to rely on him to deliver the goods in August last year.

Despite his achievements, a friction seemed to have existed between Subrahmanyam and other officials of the Jammu and Kashmir administration in the past two years. For instance, his relationship with former governor Satya Pal Malik was deemed to be fractious, causing friction in the administrative mechanism.

A part of it was also due to Malik’s rather erratic nature of giving exaggerated statements to the media. For example, Malik claimed in March this year that the Chief Secretary feared a bloodbath and told him they will “have to kill almost 1,000 people” presuming a backlash that the Raj Bhavan may face on the eve of the revocation of Article 370.

Apparently, there was a major difference in the approach towards functioning of the government, and Malik was subsequently replaced by Murmu in October last year.

On the other hand, Murmu maintained a low profile and is known to be a tenacious and diligent officer. However, differences emerged between him and Subrahmanyam also.

Altaf Bukhari, the founder of Jammu and Kashmir Apni Party, shed light on the groupism that existed in the bureaucracy that was in his words divided into L-G loyalists and chief secretary’s loyalists. Murmu was adamant on holding the Amarnath Yatra this year and even performed the pratham aarti. However, the annual pilgrimage was called off, and Subrahmanyam is believed to have played a key role in that decision.

In June, another IAS officer, Manoj Kumar Dwivedi, went on a protest leave as one of his senior officers allegedly used abusive language against him. Within a fortnight, Dwivedi was appointed as the Secretary General, Administration Department. The situation in the Union Territory seemed to be developing towards the classic case of discord between government officials who had similar backings from the top echelons.

Bureaucrats need political leadership to be answerable to, and they appear to be assuming an exaggerated sense of entitlement in Jammu and Kashmir. The work to be done in the region is still in progress, and it cannot afford to be derailed due to petty infighting.

Here is where Manoj Sinha comes into the picture. The Indian Institute of Technology-Banaras Hindu University alumnus has vast political experience, and is adept at dealing with such situations. He is no lightweight to be bogged down by the manipulative and coercive strategies of civil servants. There was a dire need to put the administrative work in motion without trivial hindrances arising out of personal arrogance.

Who’s better to do this job than one of the most trusted political aides of Prime Minister Narendra Modi himself?

Jammu and Kashmir was governed by bureaucrats for a considerable period of time now. Despite their commendable work in several fields, common people are not very forthcoming in interacting with such officials. Sinha’s sober and rational attitude inspires confidence and belief amongst those with genuine grievances as they have a capable government representative to speak to.

The Kashmiri Pandit Sangharsh Samiti (KPSS) is demanding about 500 government appointments in accordance with a 2019 High Court order. They have been angered by delays caused due to the laxity of bureaucracy. Sinha’s arrival has brought cheers as dialogue with people has been one of his primary goals after taking over as the L-G.

Additionally, there are also hopes of restarting talks at the political level. The BJP will possibly look at regional parties other than the Abdullah-Mufti brigade. Bukhari’s Jammu and Kashmir Apni Party hasn’t openly supported the ruling dispensation yet, but the time of its formation suggests that it is being prepped to emerge as an alternative to the traditional local duopoly in the region’s politics.

It will require some time, but with BJP maintaining a stronghold in Jammu and making inroads in southern Kashmir, it is about time they find a credible partner to dismantle the grip of leaders it had detained post 5 August 2019.

Sinha was in the frontline to become the chief minister of Uttar Pradesh, before being pipped to the post by Yogi Adityanath. Hence, it is crucial to note that he is a seasoned campaigner, and is someone who can balance both the administrative and political side of issues equally well.

Last year, the government had stepped up measures to deal with infiltrators and terrorists in the valley. June saw the most number of terrorists neutralised since November 2018, with 46 of them shot dead by the security forces.

Riyaz Naikoo, one of the longest-surviving commanders of the Hizb-ul-Mujahideen was killed in an encounter in May this year. More importantly, the number of new terror recruits has fallen by almost 37 per cent-42 per cent, according to sources.

However, in recent days, there has been a targeted killing and many attacks on BJP leaders. Abdul Hamid Najar in Badgum, Sajjad Ahmad and Arif Ahmad Shah from Qazigand have been shot at by unidentified gunmen. Sajjad Ahmad has died while the other two have been critically injured. This follows the killing of former Bandipora BJP chief Waseem Bari along with his brother last month.

This looks like a clear attempt by terrorists to create trouble in the Union Territory. It seems the Muslims in BJP will be targeted, and so will the Hindus from any party. For instance, Ajay Pandita, one of the very few Kashmiri Pandit sarpanchs in the region, was shot dead in June by terrorists. He was a Congress leader from Anantnag.

The ruling party had won 81 out of 310 blocks in the Block Development Council (BDC) elections that were held in October last year. Independent candidates won 217 seats in an election that wasn’t contested in the most ideal scenario for obvious reasons. However, it does show that BJP has made a sizable impact on regional politics.

This presence presents opportunity for the party to build a credible base and then gradually capitalise on it in the coming years.

Following attacks on BJP members in Kashmir, four leaders from the party in Budgam resigned fearing threat to their lives. But, the saffron party has to keep its flock together against all odds.

The first step towards countering this emerging movement is to break the very base of it, and that is what seems to be happening in the Union Territory right now. Manoj Sinha will be expected to cater to that.

The local leaders from the party will now have an approachable representative of the party high-command in the Raj Bhavan. Providing adequate security to party workers, looking after their well-being and working towards stopping targeted killings of political leaders, will be some of the priorities that a seasoned politician like Sinha can address.

After an initial period of focus on administrative issues, the situation in Jammu and Kashmir is taking a political turn. In such a scenario, there is a requirement of a proficient statesman to, a) sort out bureaucratic tussles, b) address issues people are facing in the state, c) begin talks with potential allies, d) rein in the killings of political party workers.

Moreover, there have been concerted efforts to proceed with several infrastructural projects in the last one year.

Subrahmanyam recently stated that 2,279 such projects worth Rs 5,979 crore were finally cleared in the last 12 months after several delays over the past decade.

The J&K administration already began the first phase of recruitment drive to hire 10,000 individuals for government posts in June. Along with filling other openings, focus will be to provide job opportunities in the Class IV vacancies to divorced women, single mothers, widows and destitute along with people of families from which not even a single member has a government job.

Furthermore, people such as the West Pakistan refugees, more than 6,600 retired soldiers amongst other civilians of the Gorkha community and individuals from the Valmiki Samaj have been handed domicile certificates. This allows them the basic right to buy properties and apply for jobs in the Union Territory.

These are steps that could directly better the livelihoods of the people from the valley and Jammu. At a time when such plans are being implemented, any party would want a recognisable face holding a reputed post in the territory so that the locals acknowledge the dispensation through which they have benefitted.

Sinha’s journey within the party started from his Akhil Bharatiya Vidyarthi Parishad (ABVP) days back in the 1980s. As the historically troubled region begins witnessing the numerous infrastructural, educational and residential plans laid out post the abrogation of Article 370, people will arguably begin to associate him with the developmental plans taking shape.

Moreover, to keep a leader of his stature away from mainstream politics does not bode well for the BJP. His capabilities were very well known when he held two key portfolios in the Union government in the previous term.

The dhoti-clad leader must have missed out on the chief ministerial post of Uttar Pradesh, but the responsibilities and challenges that come with his current post can have far greater consequences.

Needless to say, he looks set to take these challenges head on.