What Pakistan’s ‘Advice’ To The US Really Means 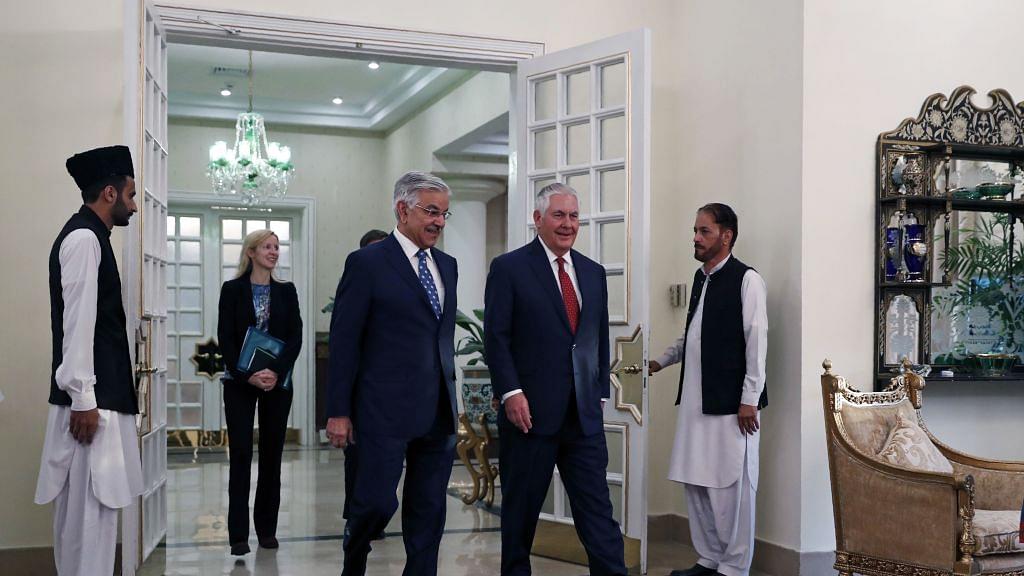 Rex Tillerson (second right) walks with Khawaja Asif as he arrives at the Prime Minister’s residence in Islamabad on 24 October 2017. (ALEX BRANDON/AFP/GettyImages)

If one did not pay sufficient attention one may just have missed it with the bat of an eyelid. During the hurried (Rex) Tillerson visit to Islamabad last week, which many say is the return of hyphenated politics in the subcontinent, Pakistan’s Foreign Minister Khwaja Asif had the gall to give the US some advice on how to resolve the issues in Afghanistan. Dawn reported on 25 October 2017: “Asif briefed that the Pakistani leadership told the American delegation that they should allow their policymakers, and not their military leaders, to devise a policy for Afghanistan as the military solution has failed and a political solution is needed”. Asif is quoted to have gone on to say, “There will only be room for improvement if Washington accepts their defeat, their failures in Afghanistan, they are not ready to accept this.”

Coming on the back of a report which also says that Asif categorically told the US that Pakistan does not want any military hardware, economic resources or material gain from Washington, this surely makes for an interesting attitude from a country which harboured Osama bin Laden and provided a passport for Mulla Mansour the late Taliban chief killed in a US drone attack. For the last 16 years, Pakistan has played a dubious game not with the US alone but with the world at large. Acting as the victim and not the perpetrator, it now offers advice on what constitutes victory and defeat.

It is interesting to see what brings Asif to give such advice and if this had the sanction of Army Chief General Qamar Bajwa who probably understands the concept of strategic victory and defeat far better. However, for the layman it would be good to know that the US employed limited hard power far below its actual capacity to defeat the Taliban and take the territory under control. For that it needed cooperation of Pakistan, two things in particular. First, a secure Pakistan – Afghanistan border to disallow the Taliban under military pressure to make a beeline for havens inside Pakistan; and second, assistance to have sufficient boots on ground to defeat and then hold the territory it captured. On the first count the Pakistanis took every benefit from the US without giving them in return the secure sealed border. Instead, it gave the Taliban the flexibility of functioning from within or outside the border.

The second issue, the quantum of boots on ground, just could not be sufficient. Airpower, including drones, cannot match the staying ability and persistence of infantry. The US could have relied on Pakistan for provision of that deficit strength through contribution of some troops. The other nation which could have given it a quantum advantage was Iran with whom it has historic antipathy which could not be set aside. Obviously the US engagement in Afghanistan cannot be termed a victory or defeat on the basis of objectives achieved and not achieved because it has not yet ended; besides the fact that victory and defeat are not terms to be as simplistically applied as Khwaja Asif has done.

The Pakistani notion of its ability to go it alone without US support stems from a false sense of confidence. The first of the factors which is responsible for this is the relationship with China and the ongoing activities of the China Pakistan Economic Corridor (CPEC). Second is Pakistan’s claimed vanquishing of internal violent extremist groups through the employment of the National Action Plan and operations such as Radd ul Fasad and Zarb e Azb. It is in celebratory mode for the reduction of overall sectarian violence, the apparent success in the tribal areas and in Karachi’s badlands which is essentially of temporary nature.

As much advice that it gives the US it must know that the absence of violence is not normalcy, nor victory. Islamic radicalism is deep rooted and the clergy is hell-bent to give the nation a radical colour. Until the clergy is on board and there is a political-ideological normalisation, Pakistan will remain vulnerable to resumption of extremist violence. The chances of that normalisation is remote unless Afghanistan stabilises and for that Pakistan needs to support the US and play a more effective role in convincing the Taliban on the non-viability of it meeting its objectives. More importantly, Pakistan needs to remember that a basic principle of sub-conventional warfare is that political solutions do not emerge until military domination has been achieved and sustained. It applies to its internal environment as much as it does to Afghanistan. That is the reason why it must extend support to the US to achieve its goals or remain in a mode of vulnerability for its own internal security problems to return with vengeance.

Not to forget that there also exist within, groups which are Jammu and Kashmir (J&K) focused and considered strategic assets by the agencies. The ideological philosophy they follow is exactly that of the Tehreek e Taliban-Pakistan (TTP) except that the targeting focus is India and in particular J&K. Thus nurturing such groups will always be fraught with danger and they will continue to contribute to the conditions which will promote instability within Pakistan. It is also rather premature, and immature on the part of Pakistan in trying to ward off US influence as China is not in a position to take the US place as senior strategic partner and supporter. Analysts and observers within Pakistan continue to believe that the China-Pakistan Economic Corridor (CPEC) will deliver to Pakistan such benefits that a surge in economic growth by up to 1-1.5 per cent may take place in the immediate future. This too is an early assumption and taking policy decisions on strategic partnerships of the future on the basis of such predictions is once again premature.

For Khwaja Asif to make military strategic statements appears imprudent. However, if this be the policy Pakistan wishes to follow then it probably needs much luck and god on its side.