When A Tamil Seer Was Insulted For Not Knowing 'Hindi' Almost 350 Years Ago... 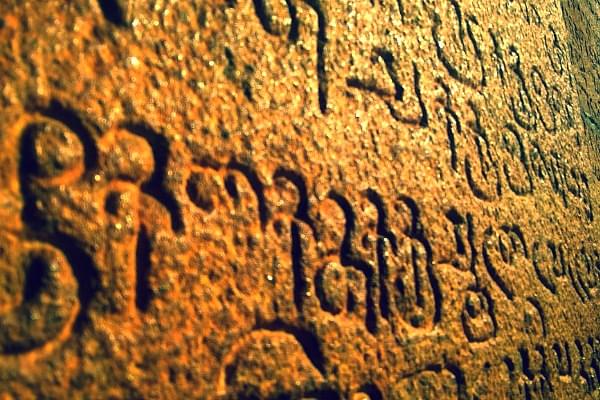 Recently, Tamil Nadu witnessed an interesting political stunt. Kanimozhi, a Member of Parliament from the Dravida Munnetra Kazhakam (DMK), claimed that she was 'insulted' in the airport by security officials for not knowing Hindi.

However, when asked for details so that action could be taken against such erring officials, she could not provide satisfactory answers.

It turned out to be more a fabricated urban legend than truth.

The DMK, whose politics is based on the axiom of Dravidian race theory, is desperate to whip back again the old anti-Hindi sentiments in Tamil Nadu.

So, in a coordinated maneuver, some personalities from the Tamil Nadu film industry put tee-shirts showing slogans in a mixture of English and Tamil meaning ‘I do not know Hindi - Poda’ - ‘Poda’ is a colloquial Tamil equivalent of ‘Get Lost’.

A spark is enough to ignite a sentiment.When we printed Tshirts, in the era of blatant Hindi imposition,we didn't know that the youngsters would respond passionately like our forefathers in fighting discriminatory practices. Thank you.#à®¹à®¿à®¨à¯à®¤à®¿_à®¤à¯à®°à®¿à®¯à®¾à®¤à¯_à®ªà¯à®à®¾ #StopHindiImposition pic.twitter.com/44HHjXuS3d

Jagat Casper, a Catholic priest who is a close friend of Kanimozhi and a strategist for the Church in its mission to appropriate Hindu culture in Tamil Nadu for Catholic activities, at once came out with a video rap-song reinforcing the same sentiments.

The video features a kid with Saivaite marks and sacred thread discovering meat inside his vegetarian food, slipped in either intentionally or accidentally.

In the Dravidianist political narrative, hiding meat pieces inside the food of served to vegetarians is a favourite theme — a hate act hailed as 'progressive'.

Initially shocked, the kid with the Saivaite mark and sacred thread, holds it, smiles and shares it with a Muslim friend.

This scene was supposed to foster 'communal harmony', according to Casper.

To make an equivalent, imagine a video where a Catholic priest finds brandy in the wine meant for holy communion and passing it on with a proud smile.

Note that the Hindu boy is shown in his ritual ceremonial dress — which is more than the equivalent of the sacredness of the holy communion of the Catholic cult.

As an aside, in a televised interview, the reverend of the Church also believes rape to be an 'impossibility' in the context of the accusations of rampant sexual abuses in the Church.

So, the DMK strategy is clear — create a totally baseless story and then create a sponsored false outrage through social media.

In all these theatrics, what actually suffered is the culture of Tamil Nadu, which is essentially the same as the rest of the nation — spiritual and pluralistic.

Interestingly, Tamil history and tradition has an incident in which a Tamil poet-seer was insulted by Mughal officers for his 'ignorance' of Hindi.

The difference between the outcomes of the two events, separated by more than 350 years, shows the way culture in Tamil Nadu has undergone deterioration because of its appropriation by the Dravidanist-missionary alliance.

A man of wisdom and mission, he was sent by his Guru Sri Masilamani Desika Swami to Varanasi to protect Dharma against the aggressive proselytizing of foreign invaders.

When Sri Kumaragurupara Swami reached Varanasi, it was governed by the Mughal prince Dara Shikoh.

In order to accomplish his mission, the Swami went to see the Mughal governor, but he was belittled and ignored by intermediary officials for his ignorance of Hindi.

According to tradition, Sri Kumaraguruparar went back and started composing verses requesting Saraswati, the Goddess of learning and wisdom, to grant him knowledge and fluency in Hindi.

Nothing happened even as he had composed nine verses, and in the tenth verse, he asked that the emperors of this world submit to the strength inherent in his melodious verses.

Unlike the countless sky-bound gods of varied religions, the Goddess is veritably experiential, he sang.

That very moment, he became fluent in Hindi. These 10 verses are called ‘Sakhala Kalavali Malai’ — Garland to the Goddess of all domains of knowledge.

Further, when the swami went to meet the Mugal governor seated on a lion, the moment is said to mark the triumph of spirit over matter.

To this day, in traditional Hindu Saivaite Tamil families, the children learn ‘Sakhala Kalavali Malai’ as an integral part of their spiritual nourishment.

It contains concepts which resonate with the most profound visions that modern linguistic scientists search for.

For example, a Tamil child learns that the word and its meaning get animated by the underlying substratum of all pervading consciousness whose divine personification is Saraswati.

In simple lyrical verses, such profound meaning gets embedded in the minds of the children.

According to the traditional biography of Sri Kumaraguruparar, some Islamist zealots who could not tolerate the veneration the Mughal governor had for Kumaraguruparar invited him for food at their houses on the pretext that a seer should be 'above communal restrictions'.

But they had prepared non-vegetarian food for him. If he refused, then he could be charged with being sectarian.

Sri Kumaraguruparar asked his assistant to bring a plate filled with some flowers covered by a cloth.

Then, when he entered the house and saw all non-vegetarian food, he told the nobles that though they had prepared all kinds of meat, they had not included pork in the menu, as a result of which the food was not 'inclusive' or 'universal'.

Hence, to ensure all kinds of meat were duly represented, he himself had brought pork to the dining venue.

The tables had suddenly turned now, and the nobles regretted their mischief.

When Kumaraguruparar revealed that he had, in reality, not brought any pork, the nobles, now chastened, prepared pure vegetarian meals (in some versions, it is said that through his yogic power, all the meat became fruits and vegetables).

Thus, the mendicant from South India transformed all the insults and attempts to humiliate him into opportunities to spread the Hindu Dharmic culture of pluralism and universal acceptance with mutual respect.

It is said that the Mughal governor, who already had a spiritual bent of mind, was so transformed that he offered his own land for the building of what is today Kumaraswamy Madam in Kashi.

The governor of the period was Dara Shikoh.

Thus, we have in our history the example of Sri Kumaragurupara Swami who came all the way from the small village of Sri Vaikuntam of Tirunelveli district in Tamil Nadu to Kasi and under the most adverse conditions, enriched Indian history, protected Hindu Dharma and nurtured national integration through his rootedness in Tamil and Saivaite traditions.

Kanimozhi and her cohorts can learn a lesson from the great Kumaraguruparar and not demean and deface such a glorious Tamil heritage.

The greatness of Tamil is in its spiritual grandeur, which again is in Sanatana Dharma — which respects theo-diversity and feels the spiritual core of all languages.

While the Dravidianist racism-based approach of Kanimozhi-Casper et al towards languages demeans the magnificence of Tamil, the Vedanta-Siddhanta approach of Sri Kumaragurupara Swami elevates and adds grandeur to the wonder that is Tamil.

The reason is both simple and profound. It is, perhaps, brought out beautifully in the preface written by Hindu savant Ram Swarup to his work ‘The Words as Revelation — the Names of Gods’:

...language is more than a mechanical tool. If we become aware of it, human speech is a great, sacred gift of God and expresses the deep, mysterious life of man’s psyche, the same as temples, cathedrals, great music and great sculpture do. It may interest many to know that Mahatma Gandhi, at an early stage in his life, had memorised the thousand Names of God; but this performance, initially mnemonic, became, through great inner searching and invoking, truths of his mind and heart, became Self- revelatory. In later life, he came to concentrate more and more on one Name, God as Truth, which became reversible for him in Truth as God. While the cultivation of one truth gave him the benefit of all other truths as well, it also taught him that truth of God is ultimately the truth of one’s own secret Self.

'Bhasha roopa': She, the Divine Feminine, is the Personification of Language — Sri Lalita Sahasra Nama [Name:678]