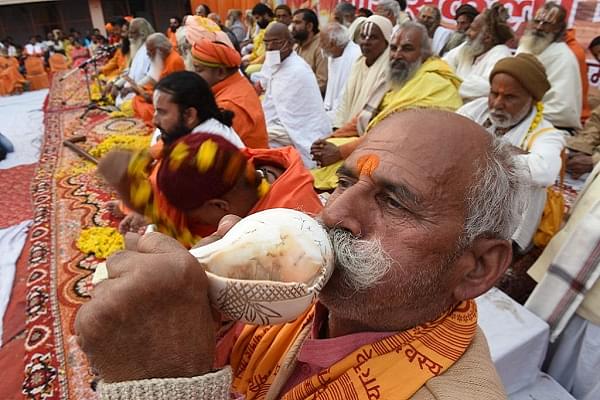 Ram Lalla resides under a canvas tent, but it remains to be seen for how long. (Deepak Gupta/Hindustan Times via Getty Images)

Ayodhya celebrated the grandest Deepavali in the country on 6 November. The scale and splendour of the festivities show that the city of Lord Ram is finally getting its due. An overwhelming majority of the locals this reporter spoke to in Ayodhya feel that at last they have a political dispensation in Lucknow that cares for the city.

The Uttar Pradesh government has announced a plethora of development works worth hundreds of crores for Ayodhya: renovating Ram Katha Museum and expanding the facilities, constructing a multipurpose hall at Digambar Akhada, landscaping and developing Guptar Ghat and Laxman Kila Ghat, installing solar lighting at five ghats and other places in the city, developing drainage as well as a solid waste management system to make sure that no sewer lines flow into Saryu River, developing streets from Chowk Ayodhya Road to Hanuman Garhi, Kanak Bhawan, and Dashrath Bhawan for pedestrians, and so on.

During Deepavali this year, the list grew further. Chief Minister Yogi Adityanath announced schemes worth over Rs 175 crore for Ayodhya: developing Ram Ki Paidi along the lines of Haridwar’s Har Ki Pauri, replacing overhead power cables with underground ones, and building a new medical college and a new airport.

Change is in the air, clearly, as far as vikas (development) is concerned. But one crucial aspect that remains unchanged is the condition of Ram Lalla. He is still forced to reside under a canvas tent.

However, from saints to commoners, many believe that a Ram temple is going to be built soon. There are two reasons for this renewed sense of hope. First, the general election is only a few months away, and temple talk has grown louder. The second reason is Yogi Adityanath. Since assuming charge in March last year, he has visited Ayodhya six times, which is unprecedented for a chief minister. Whenever he is in town, he makes it a point to visit the Ram Janmabhoomi site.

With Narendra Modi as prime minister, Yogi Adityanath as chief minister, a brute majority in Lok Sabha, and a Bharatiya Janata Party (BJP) man as president, there is now a strong belief that never has the time been better to facilitate the construction of a Ram temple.

“We are very hopeful that the temple will be built during Modi-ji’s tenure. It is our wish that the foundation stone is laid before the 2019 election,” says the renowned Mahant Nritya Gopal Das of Mani Ramdas Ki Chavani, who is also the chairman of Ram Janmabhoomi Nyas, an organisation formed to promote and oversee the construction of the Ram temple. He was also part of a delegation of saints who met in New Delhi and passed the dharma-aadesh for construction of the temple, among other things.

On speculations of a giant Ram statue and the grand Deepotsav celebration by the state government, Mahant Nritya Gopal Das said, “We welcome these and all development works launched by the administration.” The Mahant of Ram Das Ki Chavani said the question of not building the temple didn’t arise. “It has to be built. It will be built. Aaj nahi to kal banega hi (It will be built today or tomorrow).”

Though the people of Ayodhya have high expectations from Yogi Adityanath and are even willing to cut him some slack on the temple issue, the same can’t be said about their feelings for Narendra Modi.

“Modi-ji is touring all parts of the country and the world, but hasn’t come to Ayodhya even once, forget about doing a darshan (view) of Ram Lalla. Yogi-ji has come six times in the past 18 months and every time he visits the Janmabhoomi,” says Om Prakash Singh, a shopkeeper who sells puja (Hindu prayer ritual) paraphernalia outside the disputed site. “They have to build the temple. Otherwise, Modi will lose. Ab nahi banayenge to kab banega? (If not now, then when will it get built?)”

A pujari (Hindu temple priest) of Ram Gulela Temple joins in. “But where is the alternative? Only a few months are left. They won’t lose the election because of the temple issue. But certainly they won’t get 100 out of 100 votes. Ten people would not care to come out on election day. They will get hurt, but not by much,” he says.

On Modi’s silence on the matter and absence in the city, the Mahant of Digambar Akhada Suresh Das told Swarajya, “There are three kinds of people: those who say but don’t do, those who say and do it, and those who don’t say and do it. Modi-ji is in the third category and Yogi-ji in the second.”

On 2 November, Digambar Akhada organised a Shradhanjali Sabha for all the Karsevaks killed in police action in 1990. “We have said that a grand Ram temple will be the only and true homage to these martyrs,” Suresh Das says. He believes that work on the temple will start before the general election. “It will be built in Modi-ji and Yogi-ji’s tenure only. That’s a certainty. Yogi-ji has promised us that the temple will be built. He is a saint first and a chief minister next. There is no reason to distrust him. His predecessors Mahant Avaidyanath-ji and Mahant Digvijaynath-ji have played instrumental roles in the Ram Janmabhoomi movement,” says Suresh Das.

Some political pundits have indicated that the BJP doesn’t have any intention of addressing the temple issue. And that to compensate for it, the party is indulging in symbolism, such as organising a grand Deepavali programme, announcing a Ram statue on the banks of Saryu River, changing the district from Faizabad to Ayodhya, and so on.

Suresh Das says, “Deepotsav and statue are not related to the [Ram] temple, which is the main demand. No one can postpone that. I believe we will have a decision before the 2019 polls.”

The chief of Anjaneya Seva Trust, Mahant Shashikant Das, who conducts a daily maha aarti (a ritual of worship) of Saryu River at Sahastradhara ghat with 1,051 diyas, shares the strong sense of hope reflected in the views of both Mahant Nritya Gopal Das and Mahant Suresh Das. “Just as we clean our house and decorate it before the actual festival, similarly, Deepotsav celebrations and a statue should be seen as a prelude to the building of Ram temple,” Shashikant Das tells Swarajya. “They are fools who think Deepotsav and a statue can compensate for the temple.”

Treebhuvan Das, a 70-year-old sanyasi (a Hindu religious mendicant), puts it succinctly, “ The proposed statue is for tourists, the Ram temple will be for devotees.”

Mahant Narayan Achari of Dant Dhawan Kund Temple believes that the real Deepotsav will be celebrated when a Ram temple is built and that building a statue for Ram is beyond him. “The murti (idol) that we consider as sacred will be installed in the open? We wake the deity up, put him to sleep, feed him, bathe him, and by making a statue, you let him stand outside in the open, where birds excrete on him. I am not able to understand the logic behind this. If they do make the statue, it should have a canopy over it. The government should make arrangements for cleaning it regularly. It must be worshipped as well, on daily basis,” he says.

Achari is also confident that the government will make a declaration on the temple before the 2019 polls. According to the Mahant, “If Modi-ji doesn’t do it, it will cost him the election.”

The head of Ayodhya Saints Committee, Mahant Kanhaiyadas Ramayani doesn’t share the enthusiasm of other prominent saints of the city. “I don’t see a ray of hope at the end of the tunnel. The current situation saddens me no end. I have dedicated my whole life to this movement,” he told this correspondent when I visited his single-floor, two-room ashram (spiritual hermitage) in an utterly dilapidated condition right across the street from the Janmabhoomi site.

Mahant Kanhaiyadas also expresses his grievance with Modi for not visiting Ayodhya. “What was the other way for the BJP to defeat a powerful and dominant party like the Congress if not for the temple movement? It took them from two seats to 282 seats today. Yet, the Prime Minister neither comes here nor utters a word for the temple.”

“If they don’t build it, the BJP will pay a very heavy price for it,” he adds.

On changing the name of the district and the Deepotsav celebration, the Mahant says, “These are palliatives and nothing else. See the condition of Ayodhya. No well-off devotee or tourist wants to come here. Look at other holy places like Vrindavan—they have developed into major attractions. The development of entire Ayodhya is obstructed, thanks to the government that has converted the Ram Janmabhoomi into a big jail with barricading on long stretches of roads from all sides. On every important occasion, there is a warning from the police. Who would like to come here?”

How can the building of a temple change the fortunes of the city? “Now, only five to 10,000 people come for a darshan (view) of Ram Lalla. If the temple is built, it will be like a mela (carnival) every day here, and the number of devotees coming to Ayodhya will multiply. This will give a great fillip to the local economy and tourism. Many facilities will develop with the increase in the demand. Presently, we don’t even have any decent hotel here. Tourists have to stay in Faizabad,” says Shubham Gupta, a shopkeeper who runs a carpet-and-drape shop near Raja Janak Mahal.

Whether the BJP paves the way for building the temple, most saints among those who were part of the Ram Janmabhoomi movement feel they are now too old to fight the government. But the Mahant of Tapasvi Ki Chavani, Paramhans Das is in no mood to give up. Last month, he sat on a fast unto death, but within a week, Uttar Pradesh’s law enforcement officials picked him up from the site where he was fasting in the middle of the night and admitted him in PGI Lucknow.

Later, Chief Minister Adityanath offered him a glass of juice to break his fast. “Yogi-ji had assured that he would get me an audience with the Prime Minister in a week, to whom I can directly ask if he has any intention of building the temple. It’s been almost a month now. Yesterday (7 November), he sat down for breakfast with top saints in the city, but didn’t invite me. He drove past my chavani, but didn’t stop for a meeting because he knew I would only talk about the temple. During the Deepotsav, I was placed under house arrest,” Paramhans Das tells Swarajya.

The Chavani Mahant has decided to immolate himself on 6 December, a day celebrated as Shaurya Diwas, when Babri Masjid was demolished. “Ab Mahasangram hoga. Ye poore desh mein failega, aur yeh log usko rok nahi payenge (Now there will be a revolution. This will spread across the country, and these people will not be able to stop it).”